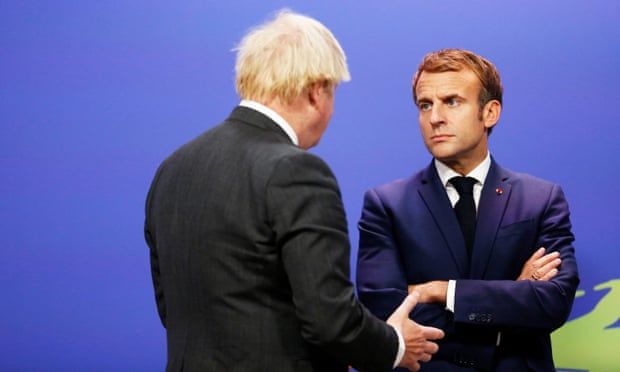 On Channel crossings, France is sick of UK ‘outsourcing’ problems

Analysis: there’s fury at Johnson tweeting out a letter to Macron – and some of the PM’s suggested five steps are inflammatory
France has reacted furiously to what officials variously called a “mediocre, unacceptable and wholly inappropriate” letter from Boris Johnson to Emmanuel Macron about the migrant Channel crossings.

The French interior minister cancelled a planned top-level meeting with the home secretary, Priti Patel,, while government spokesperson Gabriel Attal said France was “sick and tired” of Britain’s “doubletalk and outsourcing of problems”.

The fact that Johnson chose to make the letter public has infuriated Paris at least as much as its content. Macron, who officials said had not seen the letter before Johnson tweeted it, described it as “surprising”, adding: “One does not communicate from one leader to another, on questions such as these, by tweet and by letters that one then makes public.”

Johnson’s letter set out five steps for “saving lives and tackling the traffickers”. Some are uncontroversial. Technology, such as sensors and radar, is to some extent already being deployed – some funded by British government money – with extensive use being made of drones fitted with night vision cameras and patrols issued with thermal imaging binoculars.

Further cooperation on this, as well as on reciprocal maritime patrols and air surveillance, is clearly possible: British and French coastguards and sea rescue services already work in close cooperation in the Channel.

Other suggestions are not so straightforward. France has so far been unwilling to consider joint patrols, citing issues of sovereignty. French officials have asked how, if the situation were reversed, Britain might feel about having French soldiers patrolling its coastline.

The underlying objection to this approach is that France does not believe that multiplying the number of officers patrolling the coast is a solution. Paris argues it currently has more than 600 police officers and gendarmes on the Channel beat, with patrols out 24 hours a day, increasingly at night, stopping 65% of crossings.

When migrants and traffickers can hide among the dunes along more than 40 miles of coastline, emerge after a patrol has passed, and get a boat in the water in 10 minutes, officials who have worked in the area for years say it would need a police officer every 100 yards to stop them all.

Instead, France has proposed setting up joint processing centres on French soil, where applications for asylum in Britain could be examined by British immigration officers.

But it is Johnson’s final proposal, a bilateral returns agreement with France plus talks to establish a UK-EU returns agreement, that seems to have sparked the fiercest reaction. Since Britain left the EU, it is no longer able to use the bloc’s Dublin system for returning migrants to the first member state they entered. It has not so far negotiated any bilateral deals. Macron has repeatedly stated the French view that France is merely a transit country for the very small percentage – roughly 3% – of migrants who enter the EU with the UK as their preferred final destination, and that the only long-term solution is greater Europe-wide cooperation to tackle a European – indeed, global – issue.

It is suggestions such as this, which Paris views as grandstanding for political gain, that have so angered France. Coming on top of the fisheries dispute, the Aukus announcement and ongoing discussions over Northern Ireland, they have reinforced the impression in Paris that Johnson is above all playing to a domestic gallery.

A senior French government official on Friday accused Britain of “duplicity”, saying London was playing a “double game” by cooperating energetically – and sometimes successfully – on specific technical issues, while at the same time “putting out exactly the opposite message for domestic consumption, for purely political ends”.

For Paris, Johnson’s letter was evidently one provocation too many. “As soon as Boris Johnson has a problem,” said Attal, “he considers it is Europe’s responsibility to solve it. It doesn’t work like that – it works through cooperation.”
#Boris Johnson  #Priti Patel  #Johnson
Add Comment