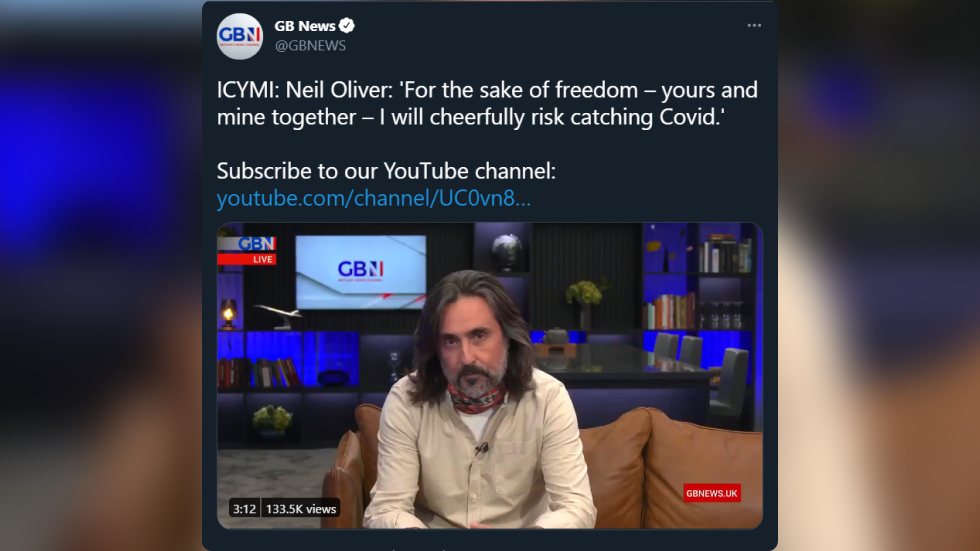 ‘Not sure the NHS will be so cheerful’: GB viewers divided as presenter says he’ll ‘cheerfully risk catching Covid’

GB News has divided its viewers again after presenter Neil Oliver said his willingness to catch Covid-19 and pass it on to others was an expression of his desire for freedom, likening it to the Battle of Britain.

On Sunday, the GB News Twitter account posted a six-minute rant by presenter Neil Oliver who delivered, with seemingly endless historical references and metaphors, his belief that vaccination must be a choice and cannot be linked with societal freedom.

"For the sake of freedom – yours and mine together – I will cheerfully risk catching Covid."

He claimed that the current situation, whereby MPs grant freedom to those who have been vaccinated and members of the public call for non-inoculated “plague rats” to be locked up, is like a tyranny. Oliver argues that this is not what people fought for, including those who fought in the Battle of Britain.

While Oliver’s rant has received over 2,000 likes, the archaeologist-cum-political TV show host was firmly condemned for sharing his “selfish” and “ignorant” opinion.

Some on social media were shocked with the ease at which Oliver said his freedom meant being able to pass a deadly virus onto the rest of the population, labelling the outspoken Scotsman as “fragile.” “Your disregard for the 130000 that have died is astonishing,” another wrote.

One jibed, “Does this include the freedom to suffer at home, rather than in an NHS hospital” so that people who haven’t made themselves intentionally ill can be treated. “Let’s hope the NHS staff ‘cheerfully’ look after you if you need treatment,” another added.

Others informed Oliver that he wouldn’t be “cheerful” if he got the virus, speaking from their own personal experience, with several Twitter users noting that many people, younger and healthier than Oliver, have died after contracting Covid-19.

A number of users also questioned why GB News would air such “irresponsible and dangerous” content, claiming the channel has continued to prove, during its short-lived history, that it is a “clear danger to society.”

Despite the broad criticism, some thanked Oliver for “beautifully” expressing their own opinions. Others just wrote “TRUTH” or “Can this man please be prime minister!!!!”

“I don’t believe I have ever heard a more honest, clear & sober explanation of freedom & peoples desire for it,” one person said.

This is not the first time Oliver has expressed his desire for freedom in the context of Britain’s vaccination programme, and it’s not the first time he’s been called out as a ‘Covidiot’. Earlier in July, the presenter told his viewers that giving vaccines to children is “grotesque.” He previously noted that lockdown was “the world’s biggest mistake.”

The young news channel, which has reportedly struggled for viewers, has promised to host all varieties of perspectives on its shows. Last week, guest, actor-cum-politician Laurence Fox called out presenter Tom Harwood for being a government representative on vaccinations.

To date, nearly 90% of UK adults are vaccinated with at least one shot, a factor which allowed the government to drop all remaining Covid-19 restrictions in July.