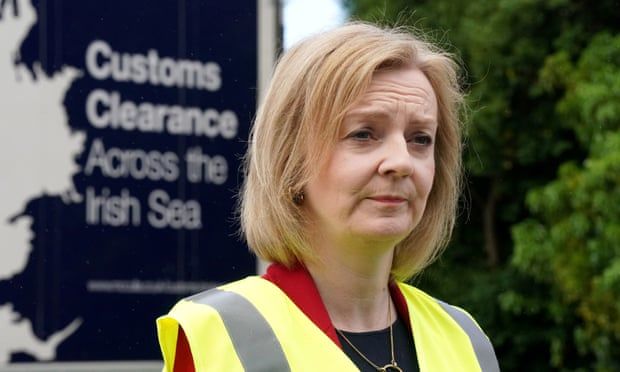 Northern Ireland protocol: what is the ‘doctrine of necessity’?

The UK government hopes a little-known legal principle will overturn parts of the post-Brexit agreement
In justifying its attempt to unilaterally overturn parts of the post-Brexit agreement with the EU, the UK government has invoked a little-known legal principle known as the “doctrine of necessity”. The loophole is allowed by the UN’s International Law Commission to be used by a state facing “grave and imminent peril”.

But the government’s ex-legal adviser Jonathan Jones said the EU would find the use of the doctrine “completely unpersuasive”.

He said Brussels would “understandably” take the UK’s unilateral decision to be a clear breach of the withdrawal agreement, which was passed by parliament days after Boris Johnson’s landslide election win in December 2019.

On Monday, Liz Truss, the foreign secretary, published a bill designed to hand the government powers to neutralise parts of the protocol on customs rules, state aid and the jurisdiction of the European court of justice.

Jones, who quit as head of the government legal department in November 2020, told Sky News that to invoke such an argument required “an incredibly high threshold” but the government’s reasoning was “very thin”.

He argued that the EU would view the move as “a very hostile act” tantamount to the UK “taking an axe to the withdrawal agreement” – of which the protocol was a significant part, ensuring no hard border on the island of Ireland but effectively creating a customs border down the Irish sea on goods travelling between it and Great Britain.

“I have no doubt the EU will bring a legal challenge,” Jones said. But he added the UK appeared to be “seeking to undo the role of the European court itself so it’s very unclear whether it will even cooperate with any legal action or dispute resolution proceedings that the EU may bring, so I think we’re in for a very, very tangled episode following this bill.”

The bill is likely to face staunch opposition from some Tory MPs when it is voted on, and even stronger pushback in the House of Lords.

Dominic Grieve, a former Conservative attorney general, said the government’s legal argument was “difficult to follow in all the circumstances, given the way the protocol was put together”.

Mark Elliot, a professor of public law and chair of the faculty of law at the University of Cambridge, also believed there had been a clear breach of the withdrawal agreement by exempting parts of the protocol from it.

He pointed out the International Law Commission precluded a state from being able to use the “doctrine of necessity” defence if it had “contributed to the situation of necessity”.

Elliot added: “In the light of those requirements, it seems to me very difficult to argue that there is a situation in which the international law doctrine of necessity applies.”

Labour similarly disputed one of the government’s main arguments. Emily Thornberry, the shadow attorney general, said: “This is complete and utter nonsense. The doctrine of necessity relies on grave and immediate peril. Boris Johnson’s career may be in peril but it doesn’t seem to apply otherwise.”

The Foreign Office insisted it was a legitimate argument. “The term ‘necessity’ is used in international law to lawfully justify situations where the only way a state can safeguard an essential interest is the non-performance of another international obligation,” it said in a statement.

“The strain that the arrangements under the protocol are placing on institutions in Northern Ireland, and more generally on sociopolitical conditions, has reached the point where the government has no other way of safeguarding the essential interests at stake than through the adoption of the legislative solution that is being proposed.

“There is, therefore, clear evidence of a state of necessity to which the government must respond to.”
#Boris Johnson  #Johnson
Add Comment