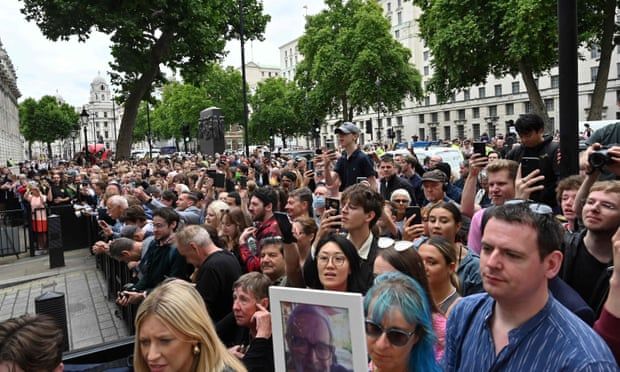 No new policies under my leadership, Boris Johnson confirms

Outgoing PM confirms no big changes of direction, including about taxation, during race to succeed him

Boris Johnson’s government will not try to implement new policies while the Conservatives choose a new leader, the prime minister has told his cabinet, deepening concerns over paralysis in the aftermath of his resignation announcement.

The prime minister, who has pledged to step aside, said he will not introduce “major changes of direction” including tax decisions over the coming weeks as Tory MPs and party members run an election for his replacement.

Labour said the government’s programme has been effectively frozen by the implosion of the last three days, when more than 50 ministers resigned in fury at Johnson. Dozens of junior ministerial positions remain unfilled and bills have not been scrutinised, Labour claimed.

An official readout of Johnson’s first meeting of his hastily assembled new cabinet – which will inevitably be overhauled by a new prime minister in several weeks – said they “would focus on delivering the agenda on which the government was elected. He [Johnson] said major fiscal decisions should be left for the next prime minister.”

Labour claimed that scrutiny of a series of bills, including those covering security and schools, had been suspended because of a lack of junior ministers.

Angela Rayner, the party’s deputy leader, told MPs that “there is no functioning government”. Speaking before Johnson’s resignation, she said 11 bill committees, where new laws are scrutinised, were cancelled because ministers were not available.

After the resignation of the Northern Ireland secretary, Brandon Lewis, on Thursday morning, Rayner said only two ministers were authorised to sign warrants for the security services using intelligence powers. “The chaos of the last three days is more than just petty infighting. These actions have serious consequences for the running of our country,” she said.

MPs questioned why the genetic technology (precision breeding) bill was suspended on Thursday – legislation that is supposed to drastically increase global food security and reduce reliance on chemical fertilisers and pesticides in the coming decade.

Almost 60 MPs resigned from various roles within government, from cabinet-level ministers to unpaid aides and trade envoys, as they sought to force Johnson out of No 10.

Some departments, such as education, were left with few elected representatives after the newly appointed secretary of state Michelle Donelan stood down after just 36 hours in the role. She was replaced by James Cleverly later on Thursday.

For several hours, the Department for Levelling up, Housing and Communities was left with a single minister after Johnson sacked its secretary of state, Michael Gove, and junior ministers quit. Gove has since been replaced by Greg Clark.

Jill Rutter, a senior fellow at the Institute for Government, said Johnson’s government could struggle to push through legislation before summer recess begins on 21 July without appointing junior ministers.

“Junior ministers do play an important role in ensuring that laws are passed. Many of those who stood down from government because they wished to force Johnson from government expressed regret,” she said.

“One option for Johnson would be to swallow his pride and reemploy them all rather than employ a new group who have little knowledge of the brief. It is not as if they resigned over policy differences.”

Rutter warned any urgent issues that are supposed to be examined by the new cabinet could be held up because some key players – including the new chancellor, Nadhim Zahawi – are expected to stand for the party leadership. “If many of the senior players stand for leadership, that will again take them away from the daily grind of government,” she said.

Former cabinet secretary Lord O’Donnell said he had faith in the civil service to maintain a functioning government. Speaking to the BBC, the former top civil servant to Tony Blair, Gordon Brown and David Cameron expressed faith in officials’ ability to work around the political chaos.

“It’s very difficult to run a government without ministers, and we’re losing them by the minute,” he said. “Our system requires civil servants to advise ministers and ministers to decide. And if there’s no one to decide, that can’t go on too long.

“We can manage this for a while, for a few days, maybe even a few weeks, but it’s absolutely not a good place to be.”