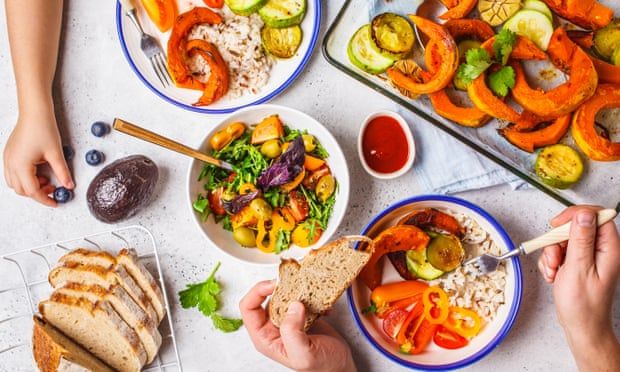 No meat please, we’re British: now a third of us approve of vegan diet

A boom in plant-based diets means next year’s Veganuary will attract more uptake than ever
When the term “vegan” was first coined, even vegetarians believed it was a fringe lifestyle. But the image of vegans as eccentric ascetics is now itself a marginal view.

More than a third of people in the UK are interested in becoming vegan, according to a new poll which indicates that the number of people eating a plant-based diet has soared in the last two years. Thirty-six per cent of UK adults believe eating a vegan or plant-based diet is “an admirable thing to do”, the YouGov survey found.

The poll, conducted on behalf of the Veganuary organisation, which encourages people to try veganism in January, asked 2,079 adults about their attitudes towards giving up animal products.

YouGov found that 8% of respondents said they were already eating a plant-based diet. Previous estimates of the proportion of vegans in the UK have put the number much lower – in 2019, the Vegan Society estimated that 600,000 adults, or just over 1% of the population, were vegan. Market research group Kantar said last year that 1.9% of households include at least one vegan.

Veganuary is being promoted with a cinema advertising campaign featuring Succession’s James Cromwell, which began today in about 500 cinemas across the country.

The Veganuary organisation’s Toni Vernelli said: “As more people become aware of the incredible impact our food choices have on our day-to-day wellbeing and the health of our planet, attitudes towards eating vegan are changing. It is incredibly exciting to see one-third of Brits now interested in trying a vegan or plant-based diet, something that would have been inconceivable just a few years ago.”

Veganism was born in 1944 when some members of the British Vegetarian Society asked for space in the group’s newsletter for people who also avoided eggs and dairy products.

When the request was rejected, Donald Watson invented the term vegan and created a new quarterly publication with about 100 supporters, including George Bernard Shaw. It grew slowly. By 2014, the Vegan Society was pleased to say that as many as 150,000 people were vegans.

That was the starting point of what advocates refer to as “the second wave of veganism”. Now every supermarket devotes space to its own plant-based ranges, vegan materials are entering mainstream fashion, and dozens of celebrities espouse veganism. Cadbury has followed food brands such as Greggs in launching plant-based products – there is now a vegan Dairy Milk, with almond paste instead of milk. The Great British Bake Off has had Vegan Week rounds since 2018 and featured the first vegan contestant, 19-year-old Freya Cox.

Part of the change in attitudes is led by availability and convenience. Companies making fake meat burgers and home meal deliveries have been backed by venture capital, which means more than 50,000 products are now certified by the Vegan Society. Supermarkets offer plant-based Christmas ranges, while star chefs such as Jamie Oliver list dozens of vegan recipes on their websites.

Yet although one in eight home-prepared meals is now vegan, according to Kantar, with less than two-thirds of meals now involving meat, most people who eat plant-based meals are not solely vegan but flexitarians.

Two-thirds of meals in the UK still involve meat or fish, however, and the first Covid lockdown in 2020 led to a boom in meat consumption, with turkey sales up by 36% in 2020. That has led to higher meat prices and less availability of meat due to demand.

Another lockdown-induced change – the growing number of pet owners – has led to a boom in vegan pet food.

Judy Nadel and Damien Clarkson set up The Pack last year and launched their first products in September.

“There’s no way we could have launched this five years ago,” Nadel said. “We had the idea in 2018 but we knew we had to wait for the right time, because people have to make their own conscious decisions about their own lifestyle and diet before they start thinking about their pets.

“I think the reason why it went mainstream is that there was an inclusive, non-judgmental approach, where people were not forced to do everything at once and give up meat,” she added. “The innovations coming out in food and beauty and fashion have made it exciting to try.”

“I’ve been vegan since 2013,” Clarkson said. “I would have to defend myself at parties and social gatherings about why I was vegan, where I got my protein from – I had to justify myself. I used to be ‘that guy, Damien, he’s a vegan’. I don’t get that now because people have 20 or 30 friends who are vegan.”
#Covid
Add Comment