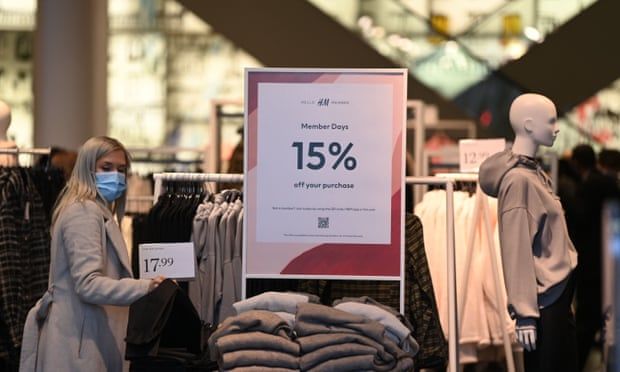 The prime minister’s spokesman said people would not have to show the documents when accessing “essential” retail, but refused to offer a definition or any examples.

The shadow health secretary, Jon Ashworth, had earlier accused the government of “creating confusion” by not spelling out whether clothes shops in his Leicester South constituency such as Next and H&M would be covered by a certificate scheme.

He added that such a plan would be “discriminatory”, as Labour hardened its stance against the idea and the prospect of the government suffering a defeat in the Commons grew, given 41 Tory MPs have vowed to oppose it.

Boris Johnson’s spokesman said on Tuesday the certificates “could have an important role to play both domestically and internationally, in terms of allowing people to move back to something more close to normal”.

The documents would show a person had been vaccinated, had a recent negative test result or had antibodies through a confirmed infection within the previous six months. They are being piloted as part of a series of trials at mass events, along with other measures including changes to social distancing and ventilation, to investigate how effective such measures are at reducing transmission.

A government-commissioned review published on Monday found the certificates “could potentially play a role” in theatres, nightclubs, sports events and festivals, and help cut the need for social distancing in “hospitality settings” such as pubs and restaurants.

While the report made clear they would not be required in essential shops, public service buildings or on public transport, it left the possibility open for businesses such as pubs and restaurants to use the documents to control entry.

Pressed to explain which stores would count as “essential”, where the government says the certificates “should never be required”, Johnson’s spokesman suggested no definition had been created.

He said: “We are taking this work forward and we will consider all the evidence but the PM was clear there’ll be some essential settings and services, such as essential retail or public transport, where we believe that Covid status certification should not be required.”

Asked twice whether clothes stores could therefore be among the shops where certificates could be required, the spokesman said: “I obviously don’t have that detail for you now.”

He added: “As has been said, we are looking at how Covid status certification could have an important role to play domestically as well as internationally. We will come forward with more detail on them or how they may work in due course.”

Allegra Stratton, the prime minister’s press secretary, played down any nervousness in Downing Street about the fierce opposition from dozens of Tory backbenchers.

“We are quite a way away from knowing specifics of the proposal,” she said. “There isn’t yet a conversation to be had with backbenchers because we haven’t yet got the proposal.”

Earlier, Johnson suggested during a visit to an AstraZeneca plant in Macclesfield that vaccine passports for holidays abroad and other overseas travel were “going to be a fact of life, probably”.

He added the government had not “given up” on restarting international travel from 17 May, explaining: “I do want to see international travel start up again. We have to be realistic – a lot of the destinations that we want to go to at the moment are suffering a new wave of the illness. We can’t do it immediately.”

Labour has said certificates could be “discriminatory”, with Keir Starmer poised to vote against the measures. A senior Labour source confirmed to the Guardian that the leader and senior members of the shadow cabinet “are all minded to vote against” the proposals.
#Boris Johnson  #AstraZeneca  #Johnson  #vaccine  #Covid
Add Comment