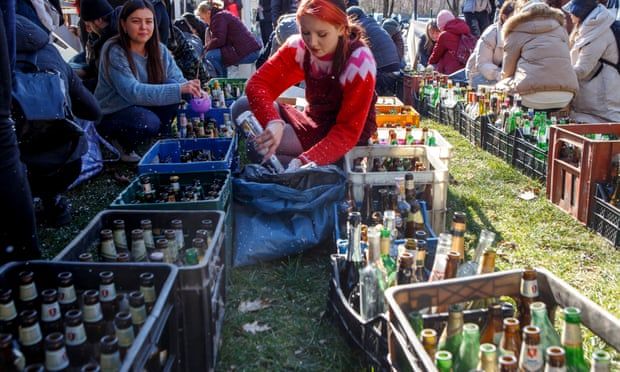 Defence minister makes clear ordinary Britons should not travel to Ukraine to fight Russian invaders
Downing Street has publicly distanced itself from Liz Truss’s suggestion that Britons should be able to join the fight in Ukraine, saying this would contravene travel advice and people should instead consider making a donation instead.

While not directly criticising the foreign secretary, Boris Johnson’s official spokesperson stressed that the Foreign Office currently advises against travel to Ukraine. It is understood that officials believe it would also be illegal for Britons to travel there with the intention of taking up arms.

Separately, the spokesperson dismissed a claim by the Kremlin that comments from Truss – it was not made clear which – prompted Vladimir Putin’s decision to put Russia’s nuclear forces on high alert.

Asked about the comments, he said: “It remains the case that the rhetoric we are seeing from Putin’s regime is designed to distract from the situation on the ground.”

On Sunday, Truss told the BBC she would “absolutely” back anyone wanting to volunteer to help the Ukrainians battle the Russian invasion, saying: “That is something people can make their own decisions about. The people of Ukraine are fighting for freedom and democracy, not just for Ukraine, but for the whole of Europe.”

Asked about this, Johnson’s spokesperson said: “We think the best way to help Ukraine would be to ensure Putin fails. There are a number of ways that Brits can show their support . The Ukrainian embassy in London is putting up information about how British people can support them.”

Pressed on whether this mean Truss had misspoken, he said: “We fully recognise the strength of feeling about British people wanting to support the Ukrainians following the Russian invasion. There is advice up on travelling to Ukraine. We currently advise against travelling to Ukraine, as you can see from the website.”

Advice on the website of Truss’s department says those who travel to eastern Ukraine to “fight, or assist others engaged in the conflict” could be prosecuted on their return to the UK.

Asked on BBC Radio 4’s Today programme about Truss’s comments, Wallace sought to argue she had been primarily trying to talk about Ukrainian nationals in the UK. He said: “I think what Liz Truss was quite rightly saying was that in her view this is a just cause, and that’s why the international community is united.”

Truss’s comments prompted criticism from several MPs, including Tobias Ellwood, the Conservative backbencher who chairs the Commons defence committee. On Sunday, he tweeted: “Please do NOT go if you have no combat experience. You may get yourself and others who have to look after you, killed.”

Questioned about Ellwood’s view, Wallace in effect endorsed it while trying to not directly criticise Truss. “I don’t think Liz Truss said we are supporting non-trained people to go and fight,” he said.

“The advice here is, if you want to help Ukraine there are lots of ways of doing it. If you are a Ukrainian national here, or a dual national who wants to go and join your fellow countrymen, there is no bar on you doing that.

“Tobias is right in this sense, as is any professional: if you’re going to be a fighter there, first of all please try and comply with the Foreign Office advice, because it is dangerous. But secondly, be trained, have experience, don’t be serving personnel. But fundamentally it is a dangerous situation, so if you are going to fight, be a professional, having had service.”
#Boris Johnson  #Johnson
Add Comment