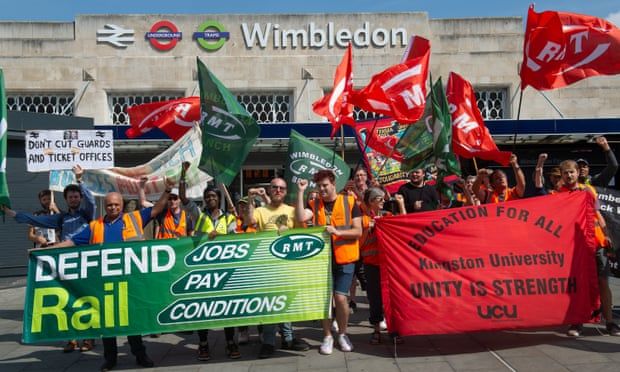 Denial comes as language toughens on both sides and head of RMT again warns of de facto general strike
Downing Street has denied that ministers are deliberately seeking a political fight with rail unions, as both sides toughened their language further and the head of the RMT warned the impasse could continue “indefinitely”.

Just 20% of rail services ran on Thursday, in a sixth day of strike action since June involving the RMT and TSSA unions, with further disruption taking place on Saturday, which is likely to affect trains throughout the weekend.

London’s underground and bus services will also be disrupted in the coming days in a parallel strike involving the RMT and the Unite union that is also over pay, working conditions and the threat of job losses.

No 10 and the Department for Transport (DfT) have faced accusations from opposition parties of not seriously trying to find a solution to the rail strike, instead using bellicose language and seeking to blame Labour for union action.

But with no sign of the strikes easing, and other sectors planning or considering action, Downing Street denied the government was seeking a fight.

“The priority is on making sure people who use public transport can get to work, school and hospital appointments without such disruption,” a No 10 source said.

However, in a notably pugnacious statement, a DfT spokesperson accused the RMT of “opting to inflict misery and disrupt the day-to-day lives of millions instead of working with industry to agree a deal that will bring our railways into the 21st century”.

They added: “Today, thousands of A-Level students across the country, many of whom have spent the majority of their college years studying at home due to the pandemic, are now being denied the chance to celebrate their hard work and dedication face to face with peers and teachers.

“It’s clear strikes are not the powerful tool they once were and union chiefs are no longer able to bring the country to a standstill as, unlike them, the world has changed and people simply work from home.”

Mick Lynch, the general secretary of the RMT, said the government’s intransigence in refusing to become involved in negotiations between unions and Network Rail meant there was no apparent end in sight for the dispute.

Speaking from a picket line outside Euston station in central London, Lynch said: “Using taxpayers’ money to satisfy the anti-union agenda of the Tory party and seek to break the trade unions is shameful, and means the dispute will be prolonged indefinitely as the train companies don’t lose a penny as a result of the industrial action and, therefore, have no incentive to settle the disputes.”

He added: “Instead of waging an ideological war against rail workers, millions of voters would rather that the government allow for a fair negotiated settlement.”

Lynch reiterated his warnings that a de facto general strike through a series of disputes could affect “every sector of the economy”.

“It’s not in my power, it’s up to the TUC,” he said. “What you are going to get is a wave of solidarity action, generalised strike action, synchronised action. And you’ll see it in every sector of the economy, in education, in health, wider parts of the transport system, in all sectors, the private sector as well.”

He also accused the transport secretary, Grant Shapps, who has steadfastly refused to intervene, of trying to “flex his rightwing muscles” to try and secure a cabinet post under the next prime minister.

On Thursday, many routes and stations were left with no services, while trains still running were only operating between 7.30am and 6.30pm.

But according to Network Rail, 4,300 rail services were due to run on Thursday and Saturday, an increase on the number during previous strikes.

However, the strike left some places, such as Portsmouth, Swansea and Blackpool, with no train services at all.

Network Rail’s chief executive, Andrew Haines, said negotiations with unions were slow and painful, and there was “an absolute lack of clarity over what it would take for this strike to be called off”.

He told BBC Radio 4’s Today programme: “We’re desperate to bring this to a resolution in a way that is affordable for the country and which avoids the pain for my colleagues.”

Transport for London has told people to avoid travelling on the tube on Friday until 8am on Saturday. The bus strike will affect routes through west and south-west London and parts of Surrey.
Add Comment