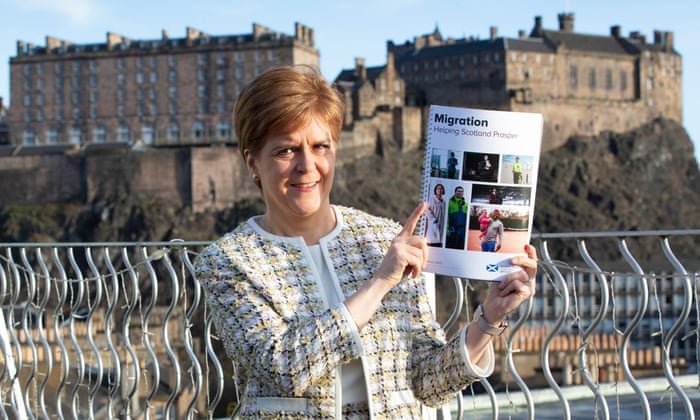 Nicola Sturgeon calls for Scotland to have own immigration powers

The first minister urged the UK government to start talks on devolving migration powers to the Scottish parliament, to allow it to introduce a flexible “Scottish visa” without the tight restrictions in force across the rest of the UK.

Holyrood would scrap the hefty application fees, salary threshold and employer sponsorship required by the Home Office, she said. This regional model is already used by Canadian provinces and Australian states.

Sturgeon said the prime minister should accept the need for a more flexible immigration system tailored to meet Scotland’s particular needs during his government’s review of the post-Brexit immigration system.

The UK government announced on Monday it would launch a fast-track visa system for talented scientists on 20 February, amid widespread concern that the UK’s research capacity will be hit by Brexit.

Sturgeon said ending free movement from within the EU would harm the UK as a whole but would be “uniquely” damaging for Scotland’s economy and public services, because it is particularly vulnerable to population decline.

“A common UK-wide approach to immigration simply hasn’t worked in Scotland’s interests for some time now. Brexit will undoubtedly exacerbate what was already a significant challenge,” she said.

The Scottish government would be the sole sponsor of applicants for a Scottish visa and would screen applications. It would then recommend people to the Home Office, which would undertake final security and identity checks, and could refuse entry if applicants failed those tests.

Applicants for a Scottish visa would need to get a Scottish income tax code from HM Revenue and Customs to prove they were resident in Scotland, and that visa would lapse if they left for any other part of the UK.

Sturgeon said Scotland was facing a population crisis because its falling birth rate and ageing population left its economy and public services heavily dependent on migration, both from within the UK and from overseas.

Scotland’s population would shrink over that period, while increasing by 9% for the UK as a whole by 2043.

Rural depopulation in remote parts of Scotland would also accelerate, with the working-age populations projected to fall by 33% in sparsely populated areas. To tackle that issue, the UK government should also implement its promise to trial a visa targeted at rural areas, she added.

The proposed Scottish visa was welcomed in principle by Scottish Labour, Universities Scotland, which represents the higher education sector, the industry body Food and Drink Scotland, and immigration campaigners.

While Sturgeon said the Scottish approach would be liberal and flexible, the policy paper she released on Monday, Migration: Helping Scotland Prosper, said there was likely to be a cap or limit to the number of migrants allowed into Scotland.

The paper said that limit would be negotiated with the UK government, as long as it did not involve an arbitrary cap set by UK ministers for political reasons.

The document said other changes were possible, including a regional approach across the UK that allowed some adaptations for local needs which would initially have a lower cap or quota.

Sturgeon said it was too early to be specific on the numbers involved but said it should reflect the needs of specific industries, such as tourism and catering, or rural areas experiencing depopulation. “In principle, the system should be as open and as flexible as possible,” she said.
Add Comment