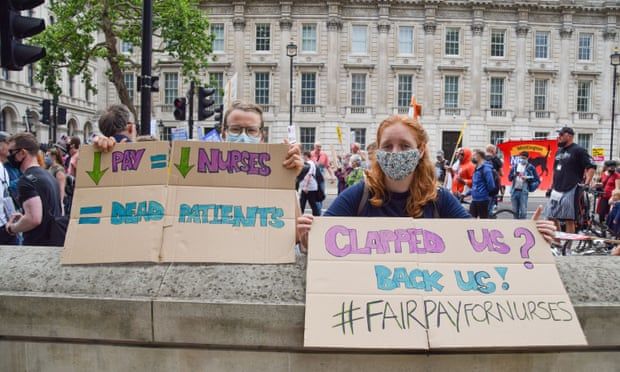 NHS staff in England could be offered 3% pay rise

The offer, up from government’s previous 1% proposal, still falls far short of what nurses, medics and the public believe is deserved
The NHS in England could be offered a 3% pay rise, despite the government previously insisting that it could only afford 1%.

An announcement is widely expected on Tuesday, a day before the House of Commons rises for its summer recess.

It is unclear, however, if 3% would be enough to placate doctors and nurses who have been seeking increases of 5% and 12.5% respectively to reward their efforts to tackle Covid-19.

There is also speculation that just 1.5% of the 3% would be added permanently to salaries, with the other 1.5% given as a one-off payment. If that proves to be the way the offer is structured then workforce representatives are likely to criticise the 3% figure as a sham and too low.

Medics have recently threatened to stop doing overtime, and nurses to go on strike for the first time, if they do not receive a pay award they believe reflects their value and hard work, especially after seeing their salaries cut in real terms during the last decade, when the NHS was subject to austerity.

The Department of Health and Social Care told the NHS pay review body in March that it proposed to give more than 1 million health workers only a 1% rise in 2021-22. Boris Johnson said ministers were trying to “give them as much as we can at the present time” and provoked anger among nurses by claiming that they would rather see more colleagues on the wards than receive a big uplift.

The then health secretary, Matt Hancock, aroused further disquiet by maintaining that 1% represented “what is affordable” and denying that it amounted to a pay cut once inflation was taken into account. Health unions criticised that as “pitiful”, “insulting” and “a kick in the teeth”.

Johnson’s increased offer comes after months of unease among Tory MPs that 1% looked mean-spirited, especially given the lengths to which NHS England staff went during the pandemic. Covid-19 has led to a rise in respect and appreciation of frontline workers, who have treated more than 400,000 people seriously ill in hospital with Covid since March 2020. Opinion polls have shown that a large majority of the public wanted frontline staff to get much more than 1%.

Jenny McGee, one of the nurses who looked after Johnson when he was hospitalised with Covid soon after the pandemic struck in March last year, resigned in May, citing the 1% offer as a key factor. “We’re not getting the respect, and now pay, that we deserve. I’m just sick of it. So I’ve handed in my resignation,” said McGee.

An official at one health union said that a 3% award would be “difficult” for unions such as the British Medical Association, Royal College of Nursing (RCN) and Unison, which have been pressing for a bigger rise, adding: “Three percent may be high enough to dissuade unions from taking industrial action, because enough of their members might accept it, especially with the law now requiring unions to get at least a 50% turnout in any ballot for industrial action, and 40% of members to agree to take action”.

The RCN looks likely to reject 3% as too little. Its branch in Scotland has already turned down the 4% payrise offered by the Scottish government and last month triggered the first stage of a disputes process which could see nurses going on strike.

Nurses in Great Britain are said to have been emboldened by the 12-hour strike undertaken by their counterparts and other NHS staff in Northern Ireland in 2019. The strikers received strong public support and forced ministers at Stormont to agree to tackle the issues behind their discontent, including pay and patient safety linked to workforce shortages.

England’s 61,000 junior doctors may also consider taking action if they are not included in the 3% deal. They are in the third year of a four-year separate deal with gives them four 2% rises. However, there was major unease among juniors – all doctors below the level of consultant – last year when consultants were given 2.8%. Medical sources say a failure to increase trainee doctors’ pay by the 3% offered to other NHS staff could risk a repeat of the strike action they took in 2015 and 2016.

It is also unclear if the government will fully cover the cost of whatever pay rise they offer. NHS officials stressed privately that the service is too underfunded to meet any of the cost involved.

Siva Anandaciva, chief analyst at the King’s Fund, said that every 1% rise would cost the Treasury between £340m and £500m a year, depending on whether it covered doctors and dentists as well as the vast majority of staff, who are covered by the longstanding Agenda for Change agreement.
#Boris Johnson  #COVID-19  #Johnson  #Covid
Add Comment