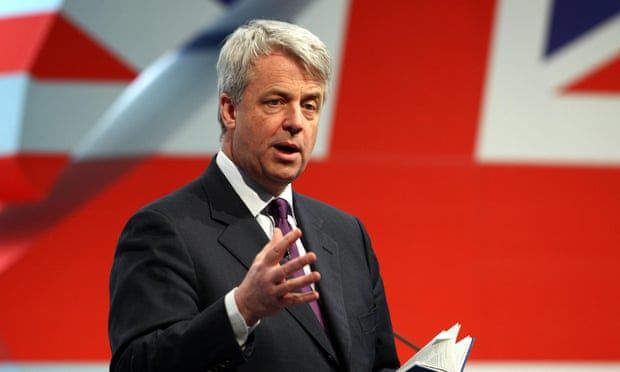 The privatisation of NHS care accelerated by Tory policies a decade ago has corresponded with a decline in quality and “significantly increased” rates of death from treatable causes, the first study of its kind says.

The hugely controversial shakeup of the health service in England in 2012 by the health secretary, Andrew Lansley, in the Tory-Lib Dem coalition government, forced local health bodies to put contracts for services out to tender.

Billions of pounds of taxpayers’ cash has since been handed to private companies to treat NHS patients, according to the landmark review.

It shows the growth in health contracts being tendered to private companies has been associated with a drop in care quality and higher rates of treatable mortality – patient deaths considered avoidable with timely, effective healthcare.

The analysis by the University of Oxford has been published in the Lancet Public Health journal. “The privatisation of the NHS in England, through the outsourcing of services to for-profit companies, consistently increased [after 2012],” it says.

“Private-sector outsourcing corresponded with significantly increased rates of treatable mortality, potentially as a result of a decline in the quality of healthcare services.”

With a record 6.5 million patients now waiting for care, and private companies being lined up to help tackle the backlog worsened by the Covid-19 pandemic, the research will prompt new fears over the potential harms of the increased outsourcing of NHS care.

“Our study suggests that increased for-profit outsourcing from clinical commissioning groups [CCGs] in England might have adversely affected the quality of care delivered to patients and resulted in increased mortality rates,” the authors said.

“Our findings suggest that further privatisation of the NHS might lead to worse population health outcomes.” 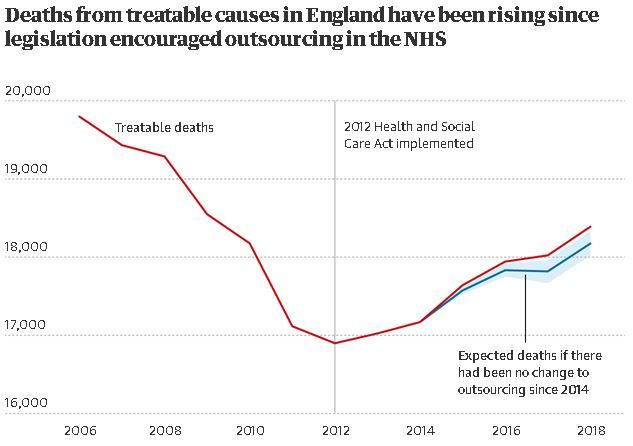 The study examined the impact of the Health and Social Care Act 2012 in England, which “intensified pressures on the NHS to outsource service provision from state-owned providers to private, for-profit providers”.

Researchers analysed data showing how much 173 CCGs in England spent on outsourcing between 2013 and 2020, which grew from 3.9% to more than 6.4%. In total, £11.5bn was handed to private companies over the period, although the amount varied considerably between CCGs.

The analysis shows that an annual increase in outsource spending of 1% is associated with a rise in treatable mortality of 0.38% – or 0.29 deaths per 100,000 people – the following year. Researchers claim 557 additional deaths between 2014 and 2020 might be attributed to the rise in outsourcing.

The authors speculated that the higher mortality might be due to private companies “delivering worse-quality care, resulting in more health complications and deaths”, or because greater competition for contracts may result in for-profit providers prioritising shorter waiting times “at the expense of quality of care”.

“While some have argued the Health and Social Care Act would improve the performance of health services by increasing competition, our findings add merit to longstanding concerns it could instead lead to cost-cutting and poorer health outcomes,” said the study’s lead, Benjamin Goodair of the University of Oxford.

“A policy of outsourcing with minimal oversight, governance or transparency is one which is going to lead to diminished quality and poorer patient care, which is exactly what today’s Lancet study shows,” he said.

The waiting list for NHS care in England this month hit 6.5 million. Dr Danny Bhagwati, vice-chair of the Doctors’ Association, said: “Given the scale of the backlog and proposed solutions involving the use of the private sector, this data highlighting the risk to patient safety must result in the government looking at the regulation of this sector urgently.”

Further analysis looked for any association between outsourcing and preventable mortality – deaths avoidable with effective public health instead of medical interventions.

None was found, suggesting the relationship between contracting out NHS services and treatable deaths is linked to quality of care, rather than as a result of general trends in population health outcomes.

“We have raised the alarm for years over the false promotion of outsourcing as better for healthcare and better for the NHS,” said Alan Taman, a spokesperson for the campaigning organisation Doctors for the NHS. “This vindicates what we have been saying.”

The authors acknowledged several limitations to their research. Their findings are not evidence of a causal relationship between outsourcing and deaths, so other factors cannot be ruled out.

Nigel Edwards, the chief executive of the Nuffield Trust, cautioned that the study “leaves many questions unanswered – not least whether outsourcing is directly responsible for these outcomes or is simply associated with them”.

However, the study’s co-author, Dr Aaron Reeves, of the University of Oxford, said: “These results clearly have implications for the NHS privatisation debate, suggesting that increased outsourcing to the private sector could lead to a decline in the quality of care provided to patients.

“While more research is needed to determine the precise causes of the declining quality of healthcare in England, our findings suggest that further increases in NHS privatisation would be a mistake.”

When NHS outsourcing has run into trouble

In 2012, Circle became the first profit-driven health firm to be put in charge of an NHS hospital when it took over Hinchingbrooke hospital in Cambridgeshire. However, it handed the contract back to the NHS in 2015 after the hospital experienced financial problems and could not keep up with the rising demand for care, which was branded “inadequate” by the Care Quality Commission.

Vanguard faced legal action over a series of eye operations carried out in 2014 at Musgrove Park hospital in Somerset. A confidential report on Vanguard said the operations appeared rushed and that surgeons were allowed to continue practising even after patients reported serious complications. The hospital terminated its contract with Vanguard after just four days.

The main private mental health hospital chains that treat NHS patients have been criticised by coroners and inquest juries dozens of times over the last decade for providing unsafe care. The Priory, Cygnet and Elysium have been censured at least 37 times for mistakes and lapses in care involved in the deaths of patients, including several children.