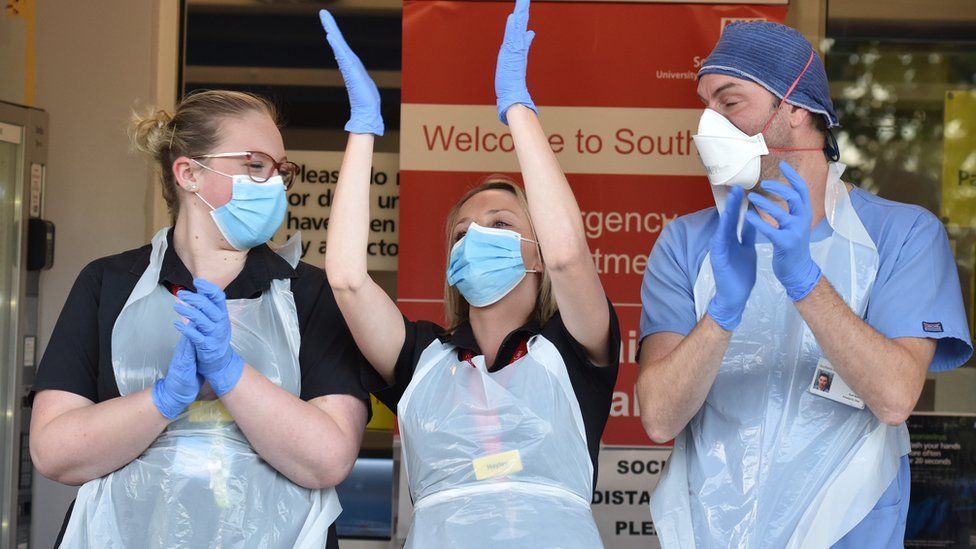 Patricia Marquis from the RCN told Times Radio it made staff in England feel they were not valued and would worsen the NHS's recruitment issues.

The body representing NHS trusts has joined unions to criticise the offer.

But the government defended its proposal, saying public finances were under unprecedented strain.

Ms Marquis, south-east regional director of the RCN, said "significant numbers" of nurses were planning to leave and "this slap in the face from the government really has just reinforced their belief that they are not valued by either the government or perhaps some of the public in the way they would want to be".

She said there were 40,000 nursing vacancies when the pandemic began and there was a "real risk" of more experienced staff leaving.
Nurse Susan Graham from Kent told the BBC the proposed pay rise was a "disgrace" after NHS staff had worked "crazy hours" during the Covid crisis.

John Anderson, a nurse from East Sussex, said he had taken colleagues to intensive care after they caught coronavirus and called the pay offer a "kick in the teeth" for them and their families.

"It feels like the government are happy to have us risk our lives - or even die in this pandemic - but not pay us properly for our jobs," he said.

What do NHS workers in England earn?

*  The starting salary for most newly-qualified nurses is £24,907

*  Staff in "high-cost areas", such as London, get extra payments

The Department of Health and Social Care has been under pressure to reconsider its pay proposal since last week, when it officially recommended the 1% rise to the independent panel that advises the government on NHS salaries.

NHS Providers, the body that represents employers in the health service, has joined in criticism of the proposal, saying the government's long-term funding plan for the NHS assumed a pay increase in 2021-22 of 2.1% - more than double what is now being offered.

Saffron Cordery, deputy chief executive of NHS Providers, told BBC Radio 4's Today programme: "Given where the NHS is at, given what frontline staff have been through, it seems absolutely wrong to take from their pockets right now the pay rise that was due to them."

Although these assumptions were published in 2019, before the pandemic, NHS Providers said the last year has "strengthened the case for a larger pay rise for NHS staff", recommending they receive at least 3%.

But the Department of Health maintains that while it set out a legal commitment for funding the NHS, the assumption of a 2.1% pay rise was not enshrined in law, and the financial pressures from the pandemic could not have been foreseen.

'Morale is low among an exhausted workforce'

The NHS pay row in England, fuelled by angry responses from health unions, rumbles on and seems unlikely to fade away.

It is significant that the employers have now entered the fray in the shape of NHS Providers, the group representing trusts in England.

NHS trust leaders know only too well that morale is low among an exhausted workforce and they fear that the proposed wage rise will make things worse. They are in effect lining up with the unions to oppose the government.

Ministers argue that the pandemic changed everything, including the state of the public finances, and that earlier plans have had to be rethought.

They say that compared to other parts of the public workforce facing a pay freeze, the NHS workforce will fare better and that difficult measures were needed to respond to public borrowing increases.

But after the unprecedented pressures on hospitals during the pandemic there is growing sympathy for health workers.

There will be a difficult few months ahead as the pay review body considers the arguments and ministers decide on their next steps.

"We've proposed what we think is affordable to make sure in the NHS people do get a pay rise," he said.

But Tory MP Dan Poulter, a former health minister who continues to work as a doctor in mental health, said NHS staff had worked without the correct equipment in the early stages of the pandemic and went "above and beyond" their hours, so it was "from a moral perspective, the wrong time to be applying pay restraint."

He said past experience of keeping down NHS wages had also proved it was "quite counter-productive economically", forcing the health service to pay more in agency costs instead.

"Our members are the doctors, nurses, midwives, porters, healthcare assistants and more, already exhausted and distressed, who are also expected to go on caring for the millions of patients on waiting lists, coping with a huge backlog of treatment as well as caring for those with Covid-19," the letter said.

Unite - the third largest union in the NHS - has also said it is considering a strike ballot, while the Royal College of Nursing has said its members should get a 12.5% increase.

The pay award would cover nearly all hospital staff, but not GPs and dentists.

In addition, some staff whose pay band is being changed will get more than a 1% increase as a result of a previously agreed three-year pay deal.

The government said newly-qualified nurses got a 12% pay rise over the course of that three-year agreement, adding that 1% was a "real-terms increase" as the latest official inflation figure was 0.9%.

Meanwhile, Labour has said NHS "heroes" deserve more money and the proposed increase is "nothing short of an insult".

Alex Norris, Labour's shadow health minister, said he would have recommended a real-terms increase for NHS staff, but said the exact figure should be set by the independent pay review body.

He said the public had been out on their doorsteps clapping for the work of NHS staff during the pandemic, and the government should not be "clapping for them one day and cutting their pay the next".

The NHS in Scotland, Wales and Northern Ireland is run by the devolved administrations.

The Scottish government has announced that 2021-22 pay negotiations will be delayed until the summer because of the disruption caused by Covid. Staff have been given an "interim" pay rise of 1%, which will form part of the new settlement.

NHS workers in Northern Ireland were promised a one-off £500 "special recognition" payment in January, following a similar announcement in Scotland.