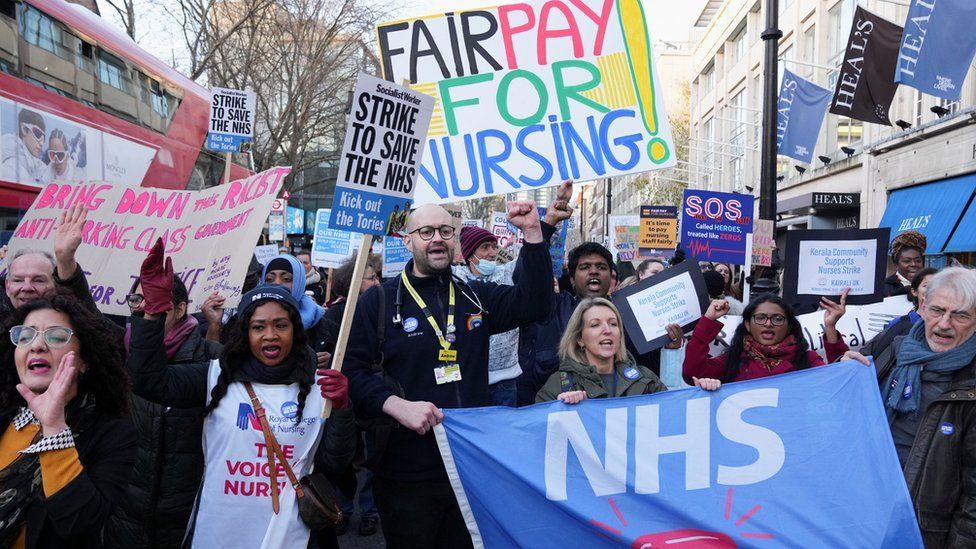 Rishi Sunak's openness to talks has offered a "chink of optimism" that a deal can be reached over nurses' pay, the head of the nursing union has said.

The prime minister told the BBC's Laura Kuenssberg he was open to a pay deal that is "responsible" and "affordable".

Pat Cullen, general secretary of the Royal College of Nursing, said: "The prime minister talked about coming to the table. Now that's a move for me."

But she said strikes will go ahead as this year's pay was still in dispute.

The health secretary is due to hold a meeting with unions on Monday, but the government has so far only agreed to discuss a settlement for the next financial year.

Nurses are already set to receive a rise for the current year, 2022-23, an average of 4.75%. This is in line with a recommendation by the independent NHS Pay Review Body in July - but the RCN says the figure is not enough to cushion the rising cost of living.

In an interview on the Sunday with Laura Kuenssberg programme, Mr Sunak was asked if he would be willing to talk about nurses' pay for this year.

"We want to have a reasonable, honest, two-way conversation about pay and everything else that is relevant.

"The most important thing is that we are talking."

Last month saw nurses in England, Wales and Northern Ireland stage a walkout for the first time in the RCN's 106-year history. The Royal College of Nursing Scotland says it is planning industrial action while the RCN has announced further strike dates in England on 18 and 19 January.

The RCN has said nurses should receive a pay increase of 5% above inflation this year, which at the peak rate of inflation would have equated to a 19% rise, although reports last week suggested it would accept 10%.

Mr Sunak said: "We are about to start a new pay settlement round... we're about to start that independent process, and before that process starts the government is keen to sit down with the unions and talk about pay and make sure they understand where we're coming from."

Speaking on the same programme, Ms Cullen repeated her call for the prime minister to meet her "halfway", and said the RCN had made a "significant move" by signalling a willingness to compromise.

"There was a chink of optimism and there was a little shift in what the prime minister was saying," she said.

"However, and this is really important, tomorrow's meeting... is not about negotiations, it's not about nurses' pay, and it's not addressing the issues that are our dispute.

"The prime minister talked about coming to the table. Now that's a move for me. But it must be about addressing pay for 2022-23."

Ahead of Monday's meeting, Health Secretary Steve Barclay suggested health workers could get a bigger pay rise in the next financial year if they agree to "efficiency" savings in the NHS.

Mr Sunak was also asked about the growing numbers of people waiting for treatment and whether the NHS was in a crisis.

The prime minister, who hosted a forum of health leaders and experts on Saturday to discuss how key issues in the health service could be addressed, said: "The NHS is undeniably under enormous pressure.

"But actually I came away from all my meetings with a renewed sense of confidence and optimism that we can get to grips with this problem.

"We've got a plan that we've got in place that we're making sure that we can actually deliver."

He repeatedly refused to reveal whether he uses private healthcare, saying the question was "not really relevant" to his role as prime minister.

Speaking to Sky News, Labour leader Sir Keir Starmer said the NHS was "not just on its knees, it's on its face".

He said a Labour government would implement a 10-year plan to reform the health service but defended his backing of the use of the private sector to lower NHS waiting lists.

Watch: Rishi Sunak says he will talk to nurses about pay