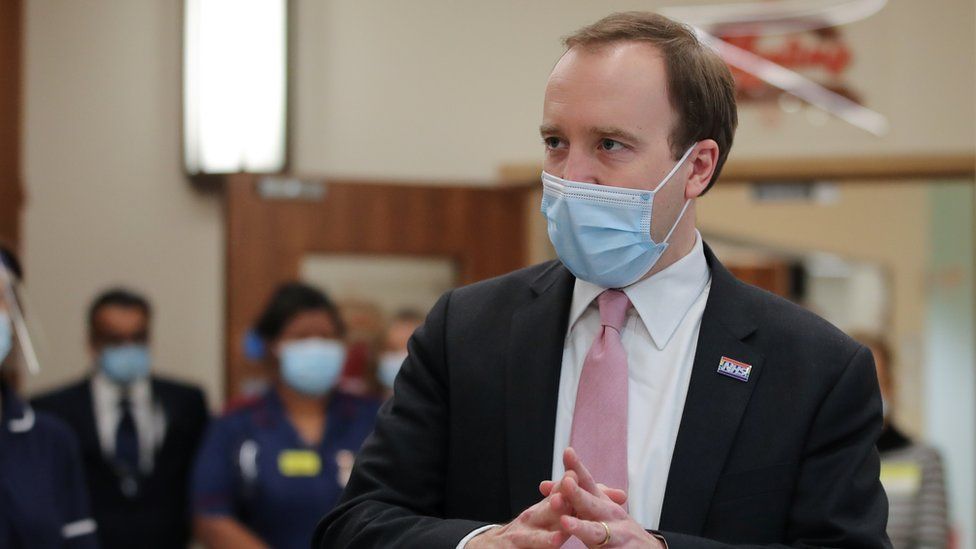 The health secretary has defended a proposed 1% pay increase for NHS workers in England this year, amid a backlash from unions.

Matt Hancock said the proposal was "what we think is affordable" given financial pressures caused by the Covid pandemic.

He added staff had been exempted from the wider freeze on public sector pay to reward their "incredible" work.

A nurses' union has set up a fund to prepare for possible strike action.

And Unite - the third largest union in the NHS - said it is considering a strike ballot.

The Royal College of Nursing (RCN) has called the recommended 1% pay rise "pitiful", arguing that its members should get 12.5% instead.

It would have to hold a ballot before strikes could go ahead.

"One of the challenges we've faced as a country is in terms of the financial consequences of the pandemic," he told reporters.

"We've proposed what we think is affordable to make sure in the NHS people do get a pay rise," he said.

The health department recommended the 1% pay award to the independent panel that advises the government on NHS salaries. It would cover nearly all hospital staff, but not GPs and dentists.

In addition, some staff whose pay band is being changed will get more than a 1% increase as a result of a previously agreed three-year pay deal.

The government says newly-qualified nurses got a 12% pay rise over the course of that three-year agreement.

What do NHS workers in England earn?

*  The starting salary for most newly qualified nurses is £24,907

*  Staff in "high-cost areas", such as London, get extra payments

In its submission to the panel, officials at the department argued the 1% rise would strike the "right balance between pay and staff numbers".

The panel is due make its own pay recommendations in early May, when ministers will make their final decision.

Some 1.3 million public sector workers will see a pay freeze next year, with those earning less than £24,000 guaranteed a pay rise of at least £250.

A government spokesperson said 1% was a "real-terms increase", as the latest official inflation figure was 0.9%.

But Unite's national officer for health Colenzo Jarrett-Thorpe said it would turn into a "pay cut in real terms" if inflation rises over this year.

RCN Chief Executive Dame Donna Kinnair has said the award shows ministers are "dangerously out of touch with nursing staff, NHS workers and the public".

The NHS in Scotland, Wales and Northern Ireland is run by the devolved administrations.

The Scottish government has announced that 2021-22 pay negotiations will be delayed until the summer because of the disruption caused by Covid. Staff have been given an "interim" pay rise of 1%, which will form part of the new settlement.

NHS workers in Northern Ireland were promised a one-off £500 "special recognition" payment in January, following a similar announcement in Scotland.