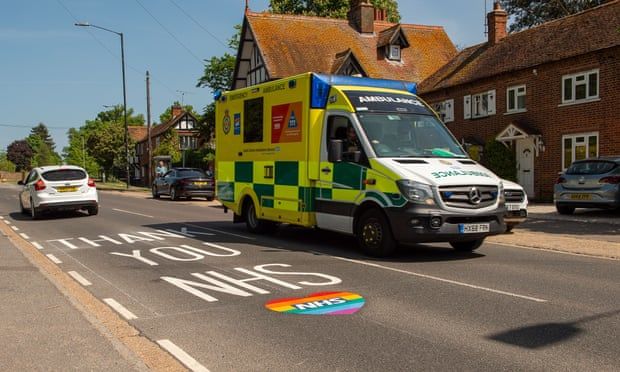 Thinktank says longer wait for treatment since Covid pandemic is main reason, in study of 11 countries
The NHS has lost its prestigious ranking as the best health system in a study of 11 rich countries by an influential US thinktank.

The UK has fallen from first to fourth in the Commonwealth Fund’s latest analysis of the performance of the healthcare systems in the nations it studied.

Norway, the Netherlands and Australia now provide better care than the UK, it found. The findings are a blow to the NHS, which had been the top-rated system in the thinktank’s two previous reports in 2017 and 2014. The US had by far the worst-rated system, despite spending the most on care.

The Washington-based Commonwealth Fund blamed the NHS’s slip down its league table on the delays patients face in accessing care and treatment, lack of investment in the service and poverty.

“According to this report, our previously world-beating health service is at risk of moving to the middle of the pack, largely due to growing delays across the system in people’s ability to access care quickly,” said Siva Anandaciva, the chief analyst at the King’s Fund, the leading UK health thinktank.

“We can’t brush this under the carpet as being solely a consequence of the impact of the pandemic on patients, staff and services. Even before Covid, waiting lists for treatment were already sizeable after a decade of stalling funding and a growing workforce crisis.

“As Covid put the NHS under unprecedented pressure, the waiting list for routine NHS care has ballooned to levels not seen since the early 2000s. Whilst the NHS is doing its best to keep services running, increasing demand for hospital, mental health and GP services means the whole health and care system is now facing a capacity crunch,” he added.

Eric Schneider, lead author of the Commonwealth Fund’s Mirror, Mirror 2021 report, said the UK had scored lower marks compared with 2017 on three of the five domains its panel of experts used: access to care; care processes, which look at the co-ordination of treatment and how well patients are involved; and equity, or the ability to obtain healthcare regardless of income.

He pinpointed the time taken to access care in the UK as a key factor in its ranking. “For example, nearly 60% of adults in the UK found it somewhat or very difficult to obtain after-hours care, one of the highest rates among the countries surveyed,” he said.

The study also found that while 78% of Britons in 2017 said that their regular doctor always or often answered a query on the day they posed it, just 65% did so this year. Similarly, while 57% in 2017 said they saw a doctor or nurse on the same or next day the last time they sought care, that has fallen to 52%

In addition, just 33% of patients said that they got counselling or treatment for mental health problems when they sought help from a specialist in psychological or psychiatric illness – a new indicator that the thinktank had not previously analysed. The NHS was the second worst performer of the 11 countries on that criterion, just ahead of France.

As well as being ranked fourth overall the UK was also ranked fourth out of 11 for access to care, administrative efficiency and equity, and fifth for care processes but just ninth for health care outcomes, which measures how well patients recover after undergoing medical treatment.

Asked to explain the NHS’s decline relative to the other nations, Schneider added: “We know that reported experiences of access, co-ordination and engagement can deteriorate over time if budgets are cut. The UK has been a remarkably lean spender among high-income countries while nevertheless maintaining a very high ranking.”

NHS England declined to comment. A Department of Health and Social Care spokesperson said: “We are committed to making sure the NHS has everything it needs to continue providing excellent care to the public, as we tackle the backlogs that have built up.

“We gave the NHS a historic settlement in 2018, which will see its budget rise by £33.9bn by 2023/24, and we have provided an extra £92bn to support health and care services throughout the pandemic.”
#Covid
Add Comment