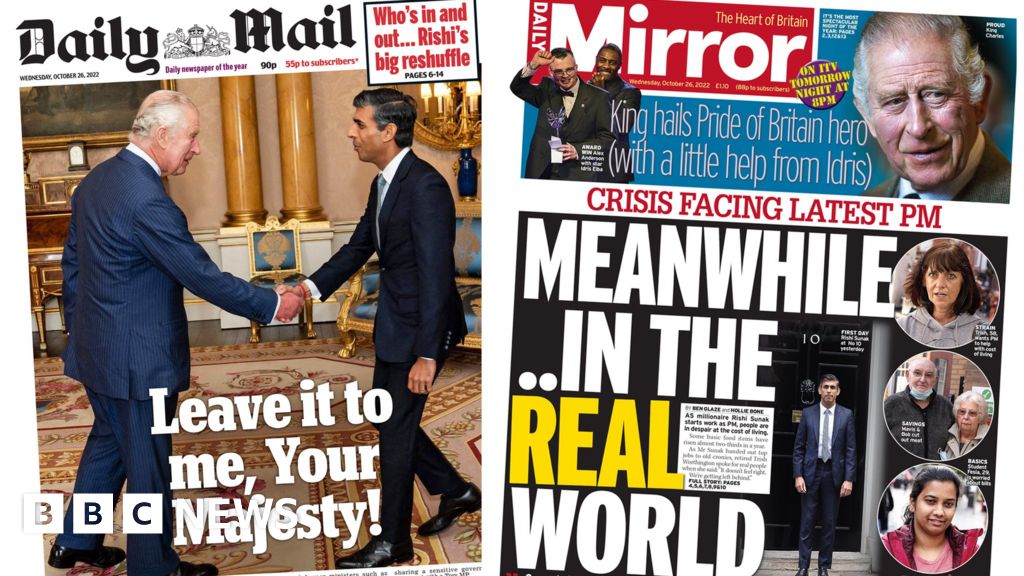 Newspaper headlines: 'Crisis cabinet' and 'kings can only get better' 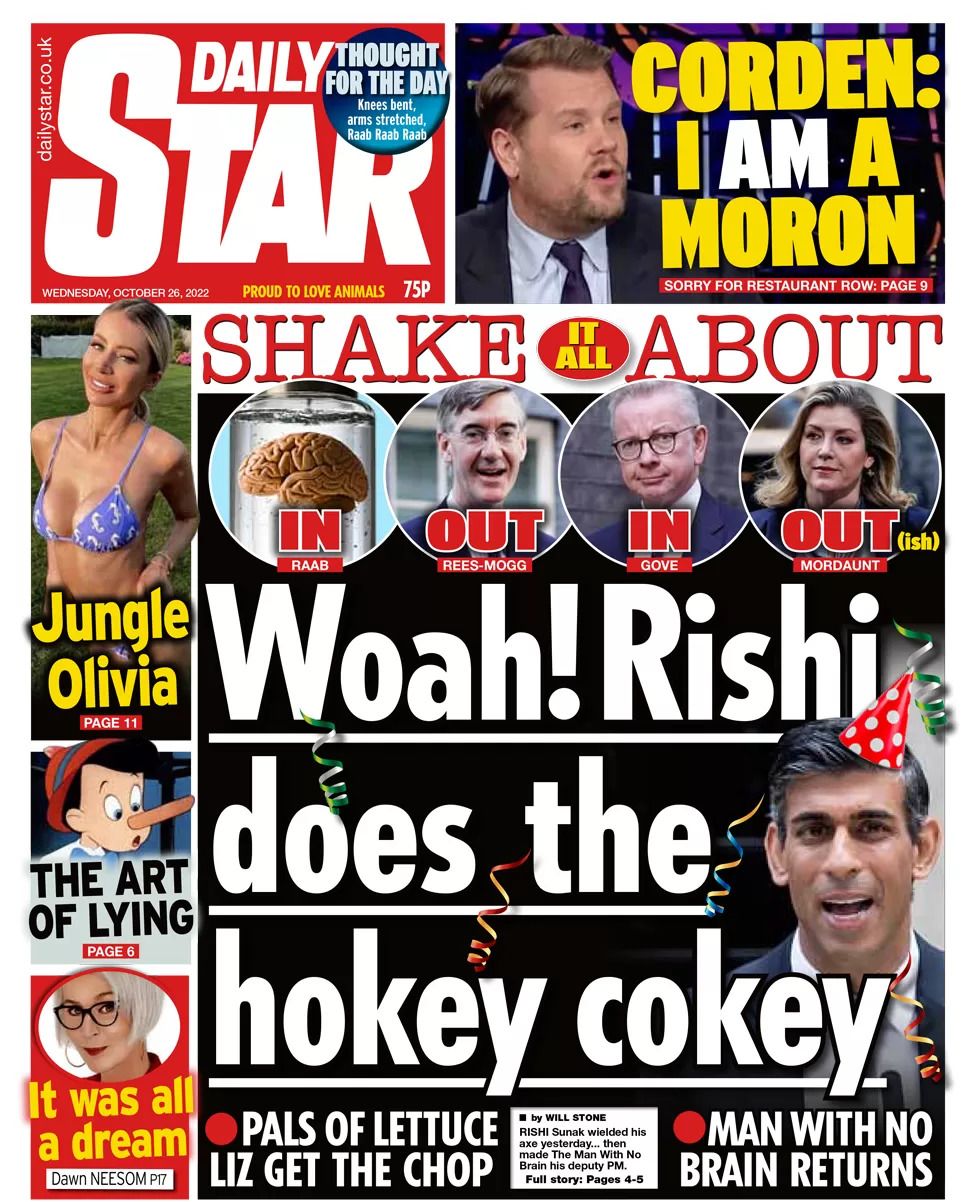 The Daily Star takes a playful look at Mr Sunak's new cabinet, which he announced during his first day as prime minister on Tuesday. Using the analogy of the children's song "The Hokey Cokey", the paper looks at who is "in or out", following Jacob Rees Mogg's resignation as business secretary and Suella Braverman's return as home secretary. And instead of a picture of Dominic Raab, there is a graphic of a brain in a jar, with the paper dubbing the new deputy prime minister "The man with no brain". 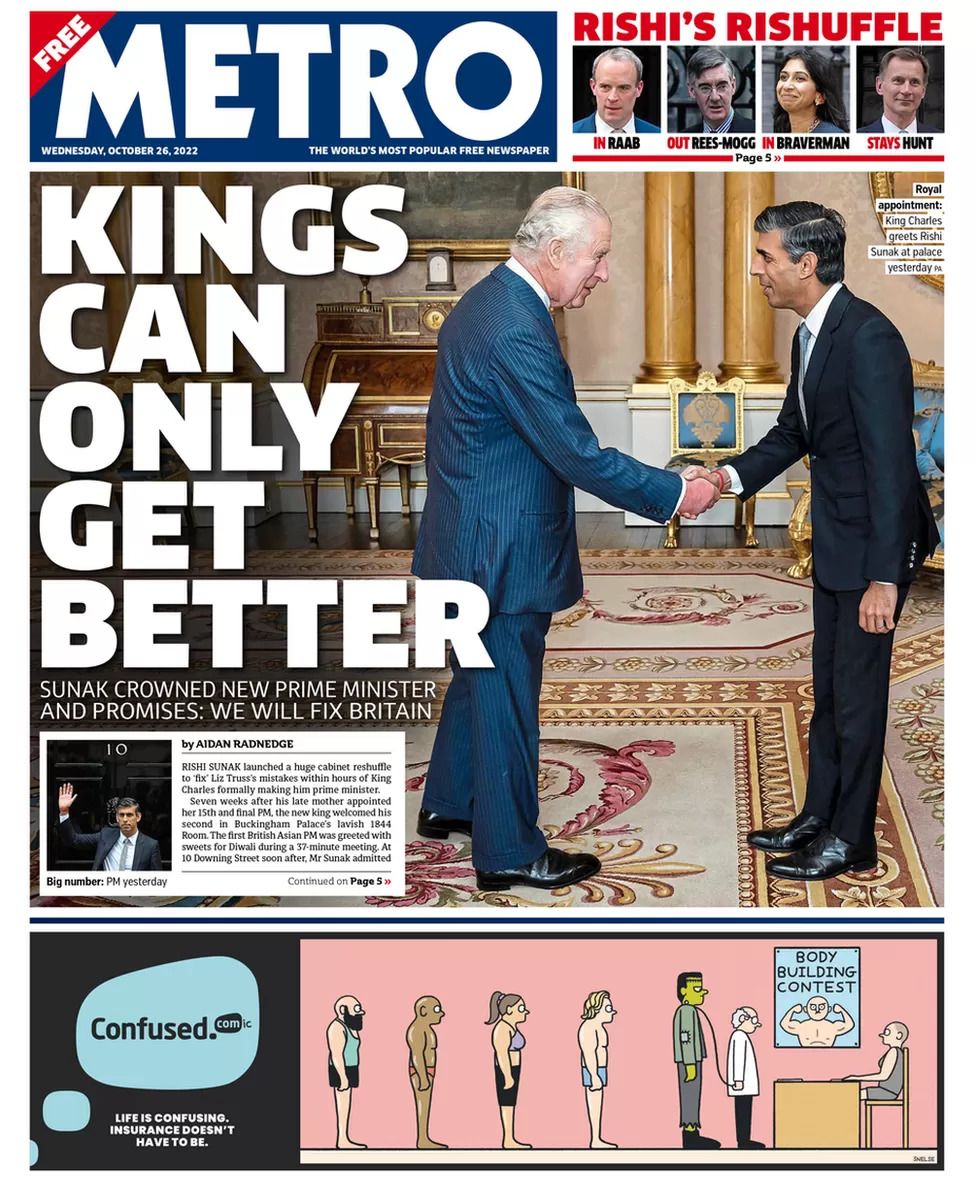 The Metro leads on Mr Sunak meeting King Charles III in Buckingham Palace's lavish 1844 Room on Tuesday as he was formally made prime minister. The front page features a large image of the pair shaking hands, as well as pictures of key figures in the PM's cabinet reshuffle. 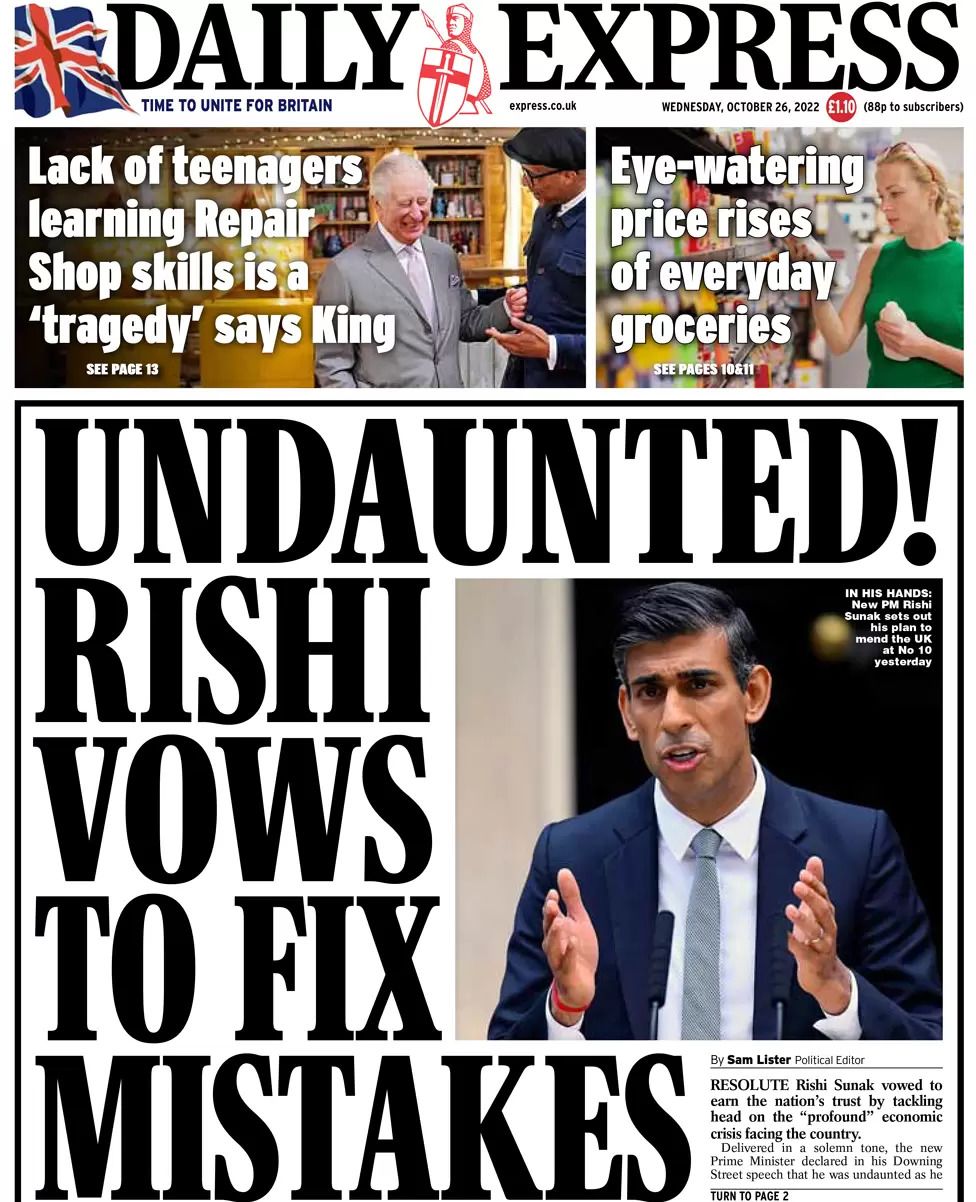 The Daily Express focuses on Mr Sunak's vow to earn the nation's trust by tackling the "profound" economic crisis facing the UK. Like other front pages, the Express carries a picture of King Charles, but this time the story is about the new monarch's dismay over the lack of teenagers learning practical skills. 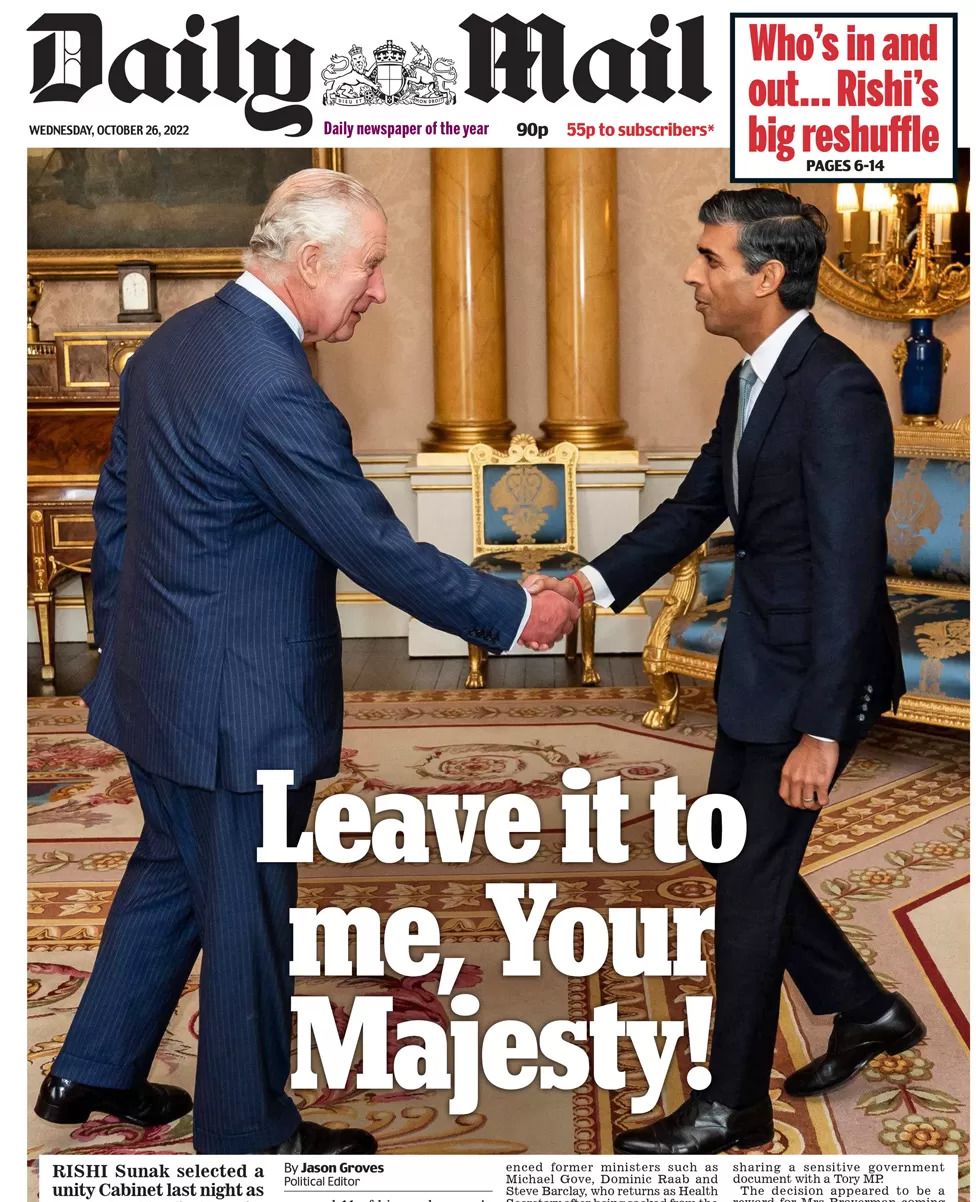 The Daily Mail features Mr Sunak's pledge to "fix the mistakes" of his predecessor Liz Truss, and details who has been given jobs in his cabinet. The front page carries a large image of the prime minister meeting King Charles. 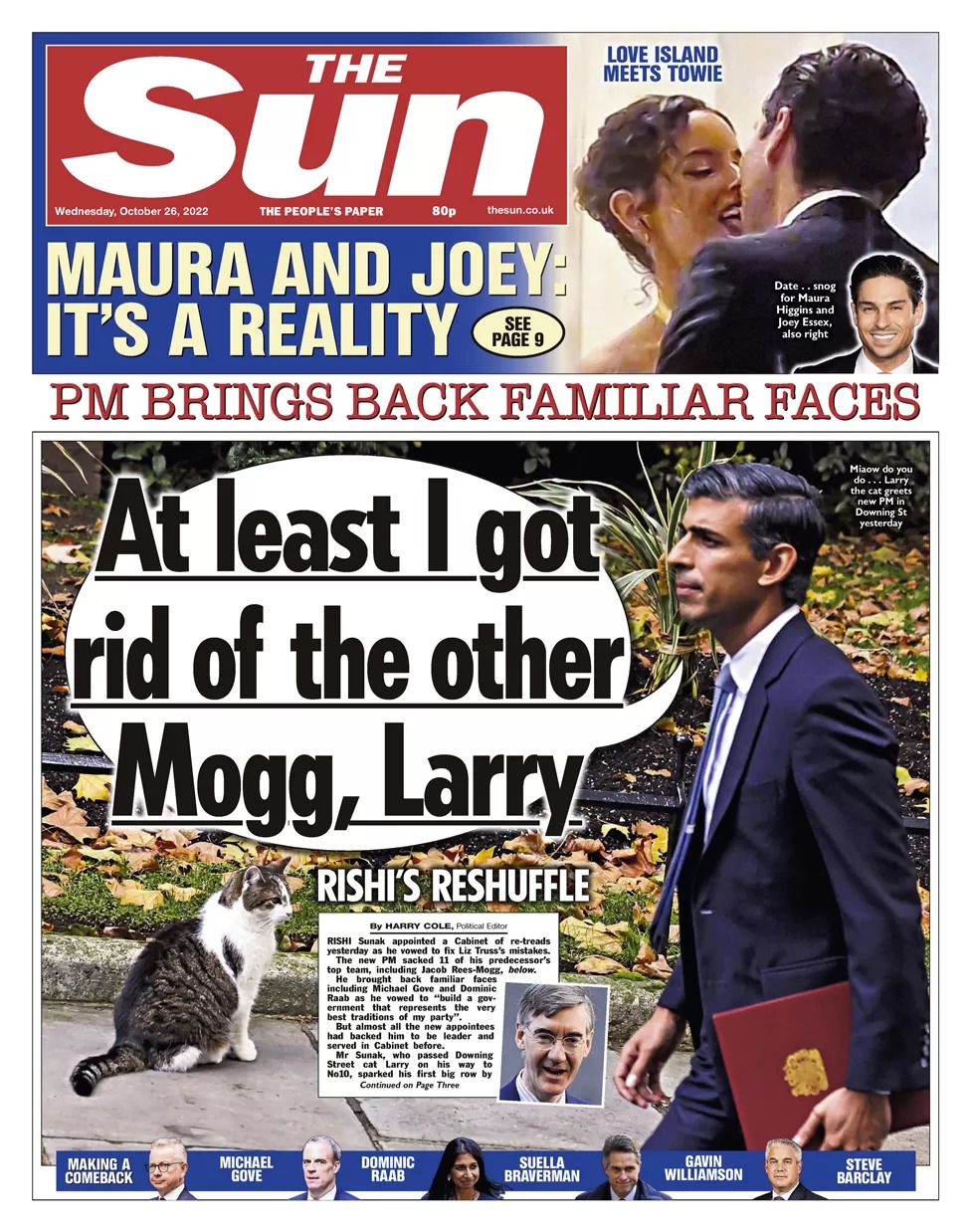 The Sun takes a different look at the new cabinet by using a picture of the famous No 10 cat Larry to report that the "other Mogg" (ie Jacob Rees Mogg) resigned as business secretary on Tuesday. 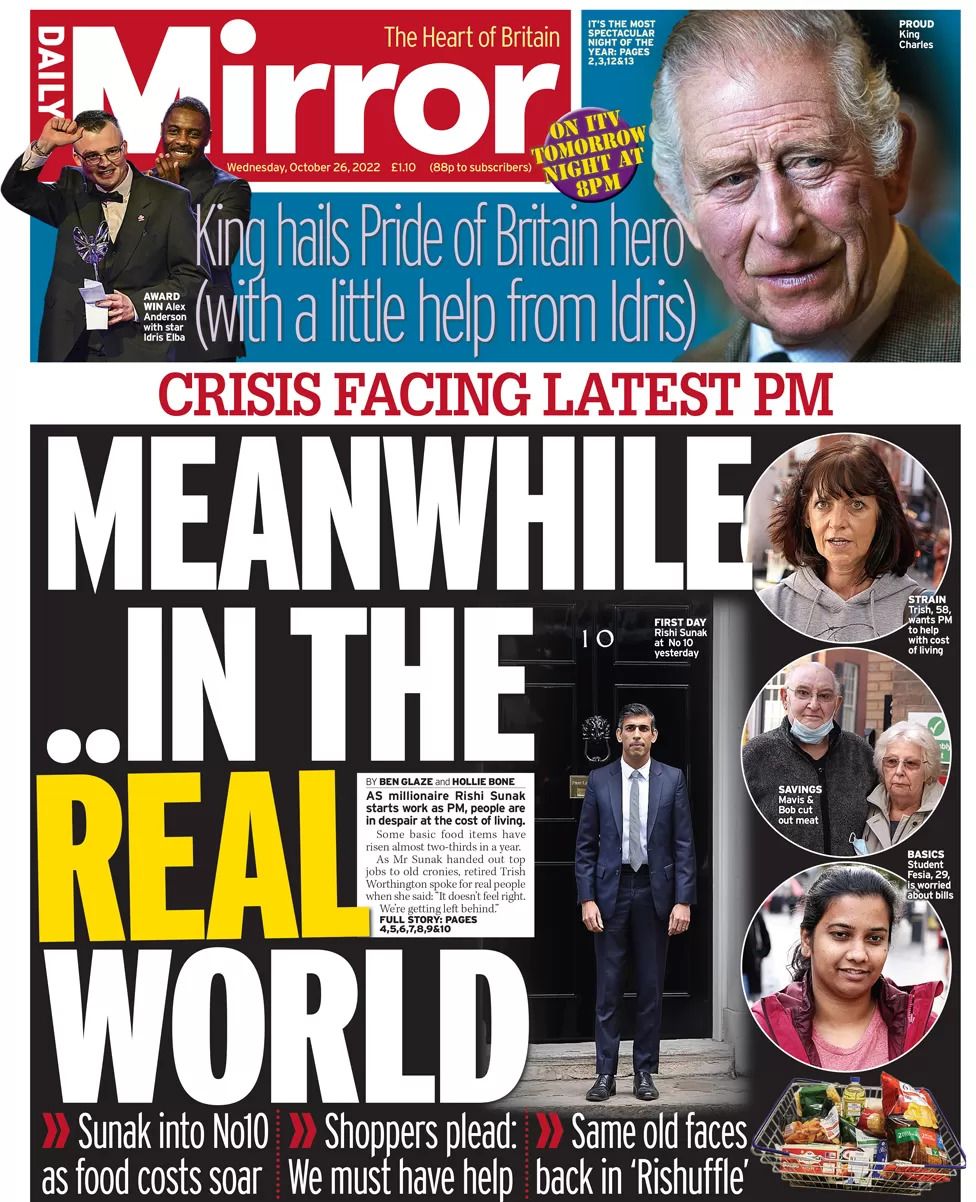 The Daily Mirror highlights the cost of living crisis facing "real people" as the new prime minister as he gets to grip with his new role. The lead story looks at how some basic food items have risen almost two-thirds in price in a year. The paper goes on to add that shoppers are pleading for help with soaring food costs. 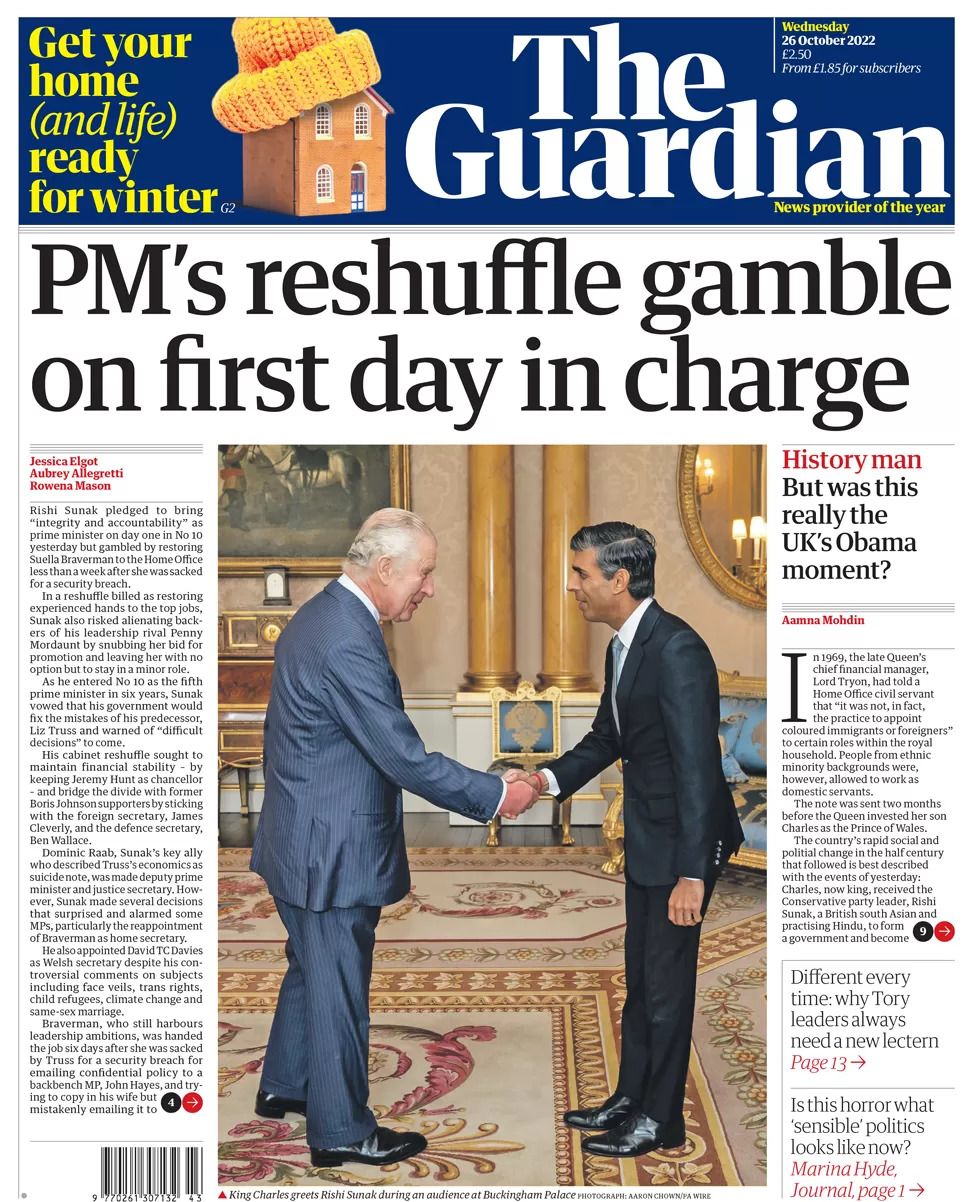 The Guardian offers tips on preparing your home for winter, alongside the big news of the day of Mr Sunak's reshuffle on his first day as prime minister. The front page also features analysis which asks whether the UK is seeing its own "Obama moment" after its first Asian prime minister took to power. 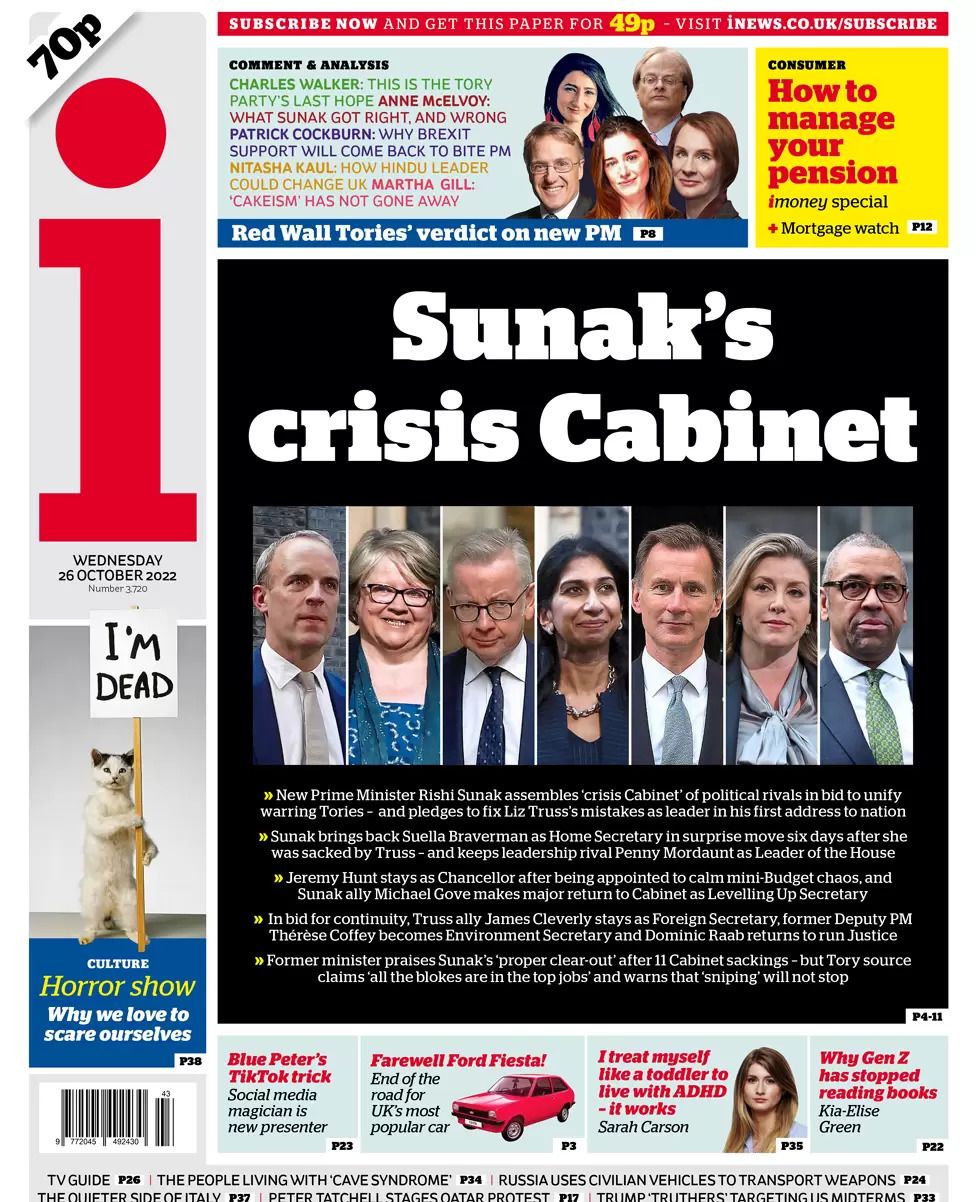 Like most of the papers, the i shares details about which Conservative MPs will be in Mr Sunak's new cabinet. There is also financial advice on how people can manage their pension as the cost of living crisis continues. 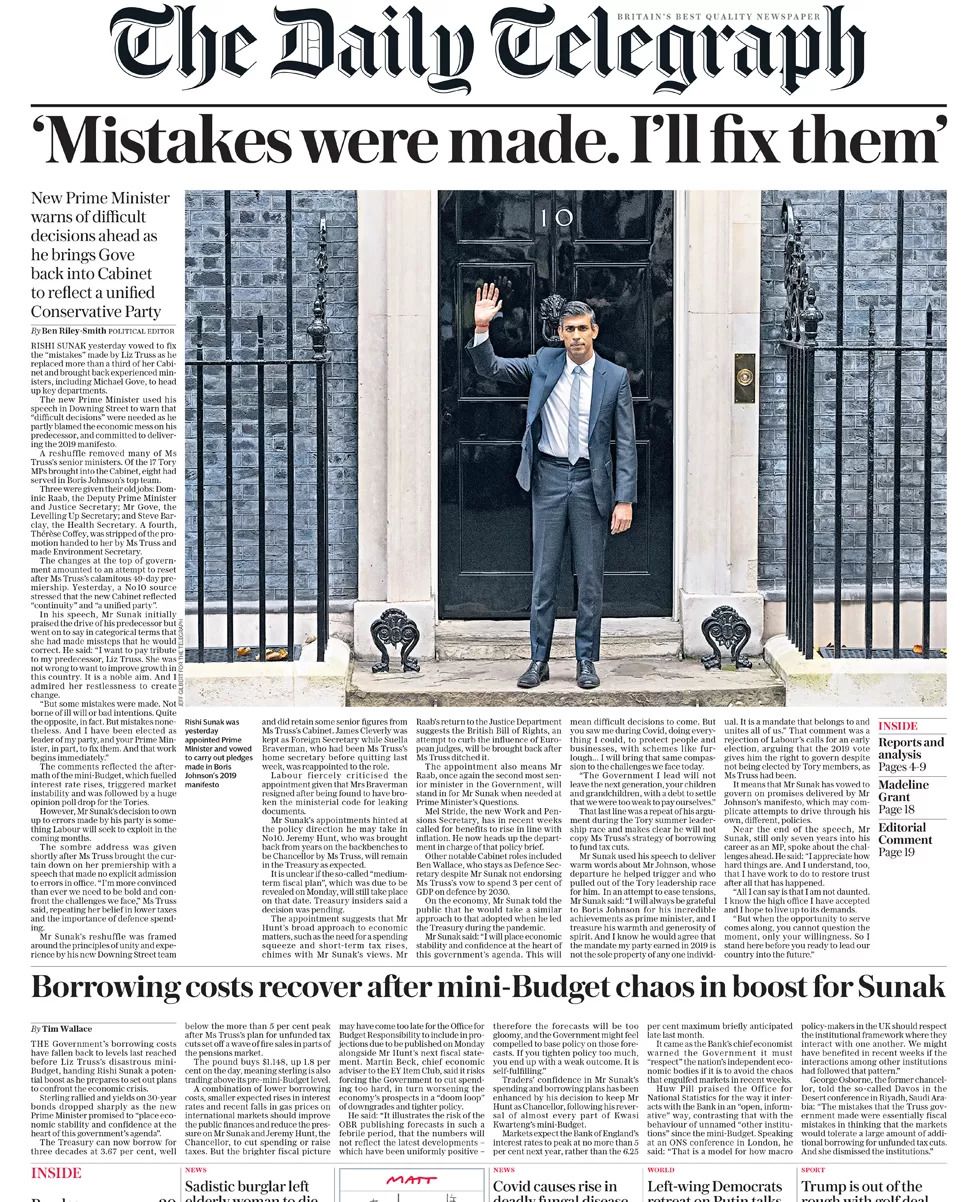 The Telegraph says that Mr Sunak has seen a boost to his premiership already as borrowing costs have recovered following the mini-budget chaos of the last few weeks, and the paper leads on Mr Sunak's speech about how he will "fix" the mistakes made by Ms Truss. 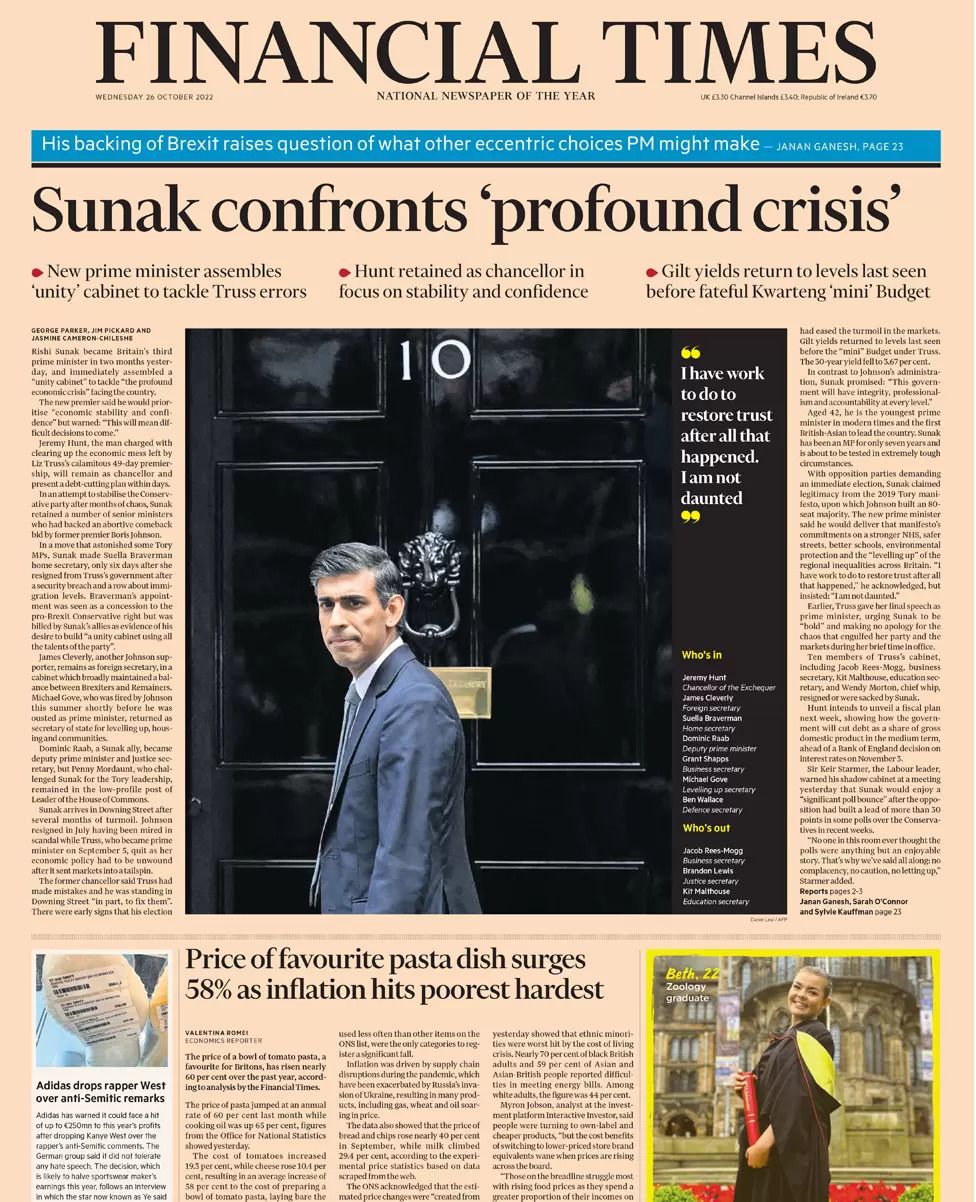 The FT carries a story on rising food costs in the UK, reporting that the price of a bowl of tomato pasta has risen by 58% as inflation hits the country's poorest people the hardest. The paper also looks at what decisions Mr Sunak may make as prime minister as he prepares to confront the cost of living crisis. 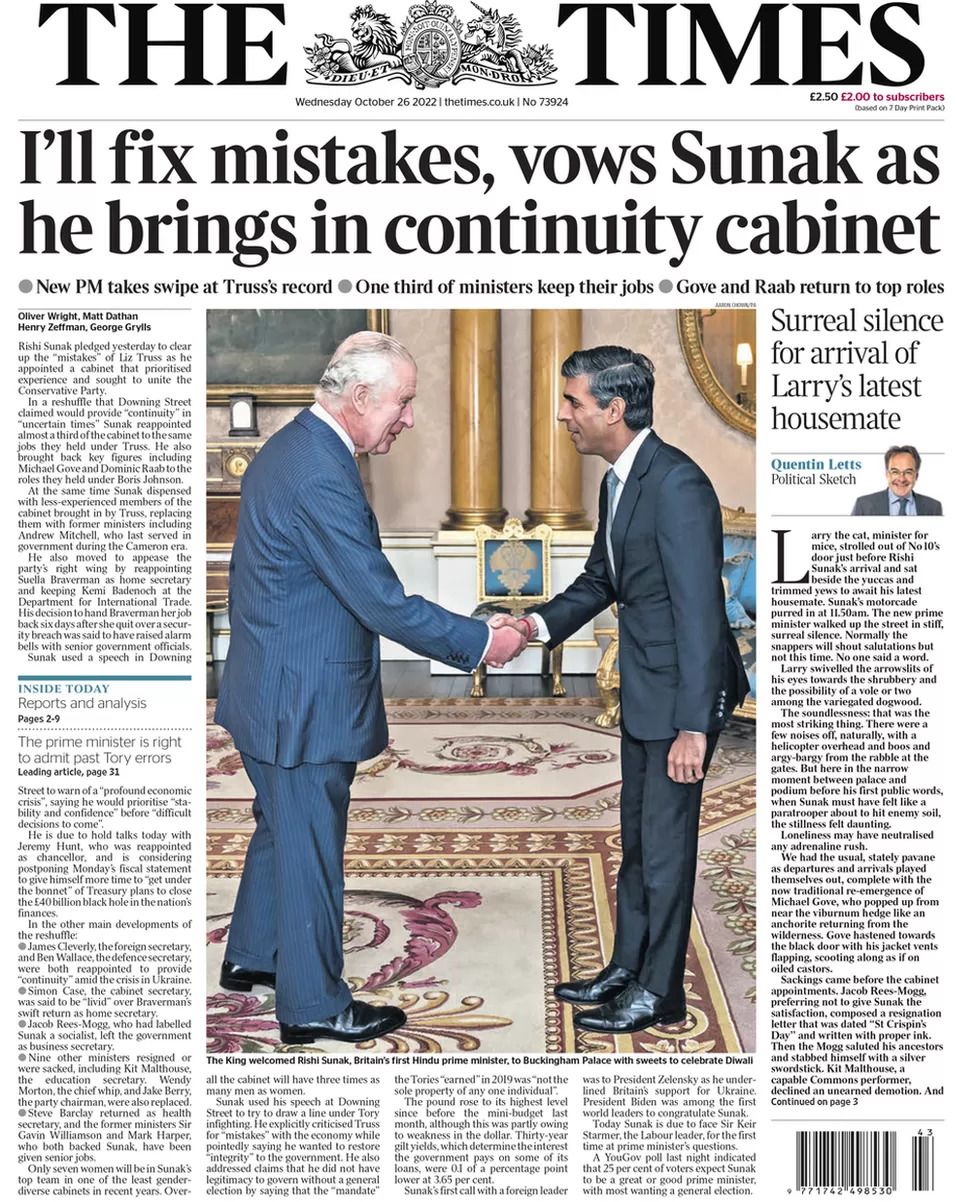 The Times's lead story is headlined on Mr Sunak's vow to fix Liz Truss's mistakes. A political sketch notes that there was an unusual silence from reporters and photographers as Mr Sunak arrived at Downing Street on Tuesday, as nobody shouted any salutations or asked questions.