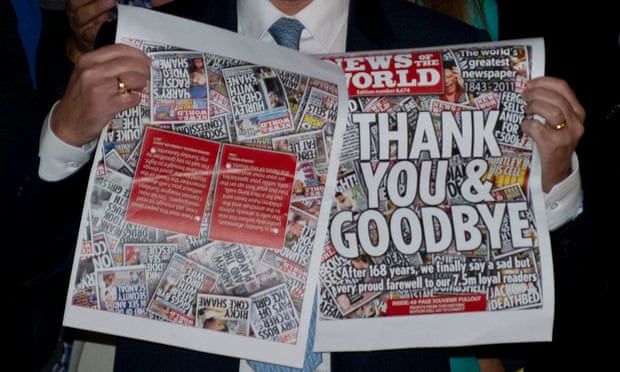 Rupert Murdoch’s News Group Newspapers asked for litigation to be brought to an end 15 years after scandal broke
The publisher of the News of the World has failed in its attempt to force a deadline on potential victims of the phone-hacking scandal to make claims against it.

Rupert Murdoch’s News Group Newspapers (NGN), which published the now defunct newspaper as well as the Sun, asked for litigation to be brought to an end 15 years after the scandal broke.

About 1,028 claims have already been settled, plus an additional 358 applications that were made to a compensation scheme run by parent company News International between 2011 and 2016.

But NGN’s lawyers were rebuffed when they argued at a hearing in London that it is time to impose a final deadline on potential victims to file new claims against the organisation.

The failed bid comes as the Sun recorded a loss of £51m last year. NGN spent £49m on legal fees and damages relating to historical phone-hacking allegations in the year to 27 June 2021. This compares with the £80m NGN spent the previous year.

There could be as many as “20,000 to 25,000 potential victims of NGN’s unlawful information gathering” and there should be no cut-off date, lawyers representing a number of victims argued.

He argued that the “vast majority of victims do not know they have a claim due to the intentionally covert nature of NGN’s unlawful information gathering and its deliberate concealment of the same”.

Anthony Hudson QC, for NGN, told the court on Thursday: “We say after 15 years of litigation, the resolution and compromise of more than 1,000 claims, the enormous use of court time during that period, vast quantities of disclosure [of evidence] and the huge costs that have been incurred and paid, we suggest that now is the appropriate time to ensure that any intended claims are brought within a reasonable time and that the slow drip-feed of the evidence – which on the claimants’ approach could last many more years, possibly another decade – is brought to a conclusion.”

The barrister said there have been about 45 hearings since 2016, taking up about 70 hours of court time, and that legal costs have been “exorbitant”, with total costs for the third tranche of the litigation alone reaching nearly £35m.

He said allegations had been in the public domain since former News of the World journalist Clive Goodman was arrested in 2006 and that it would be “difficult for anyone living in this country to be unaware” of the phone-hacking scandal.

But giving judgment on Friday, Mr Justice Fancourt said he did not agree with NGN’s submission that the majority of potential victims already know they could make a claim. The judge said: “More claims are now being brought that do not arise from an article being published. Even when claimants did have an article published about them, it is not obvious this was how the information was gathered.”

He added that new claimants were still learning of potential claims after appearing as witnesses in other claimants’ cases, but said the court’s position may change in the future.

The court heard that there are currently 52 claims registered, with a further 436 claims at the pre-action letter stage and 82 more “in the pipeline”.
Add Comment