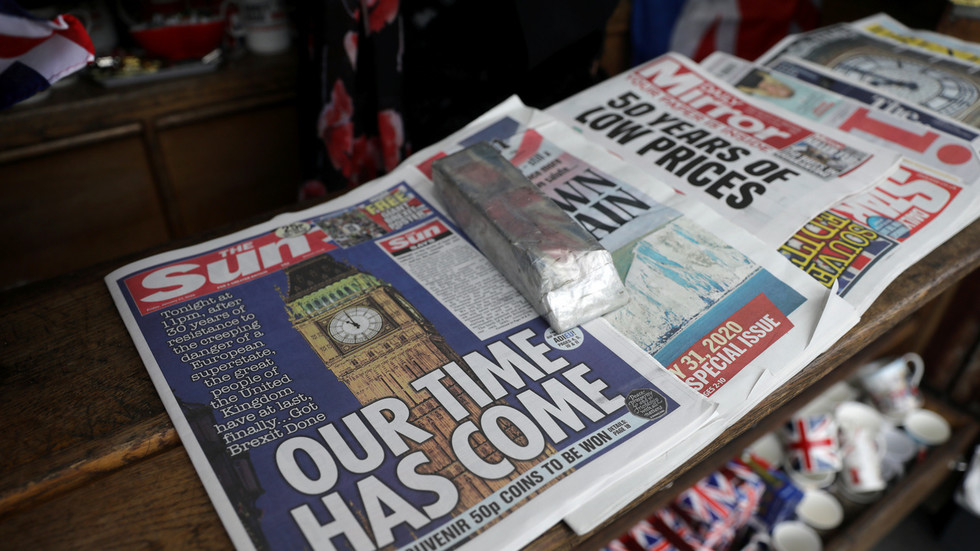 ‘New dawn’ or ‘leap into the unknown’? How the UK’s partisan press marked Brexit day

As the sun sets on the UK’s 47 years in the European Union, Britain’s famously partisan newspapers are offering wildly different takes on the country’s prospects as Brexit finally comes into effect.

Naturally Brexit dominated the front pages on the last day of Britain’s membership of the EU. After more than three years of political and legal wrangling the UK finally exits the bloc at 11pm local time on Friday.

The country’s more conservative news outlets adopted euphoric tones, with the Daily Mail hailing it as “a new dawn for Britain”, the Express screaming “We did it!” and the Sun saying that Britain’s “time has come”.

The broadsheet Daily Telegraph also struck an ebullient tone, leading with a photo of Prime Minister Boris Johnson under a headline proclaiming “This is not an end, but a beginning”.

The Times took a business-centric view of proceedings, dedicating its front page to a report on Johnson’s desire for a “Canada-style” trade deal with Brussels.

The Guardian led the way among the more downbeat papers, describing Brexit as “the biggest gamble in a generation” below a headline proclaiming Britain a “Small Island”.

The Independent emblazoned an EU flag on its cover and printed “goodbye” in a multitude of European languages. It also asked whether it is “inevitable” that Britain will one day rejoin the union.

Metro’s offering read “Thank EU and goodbye”, while the Financial Times front page served as a neat summary of all of the other papers, with a headline reading “Britain bows out of the EU with a mixture of optimism and regret”.