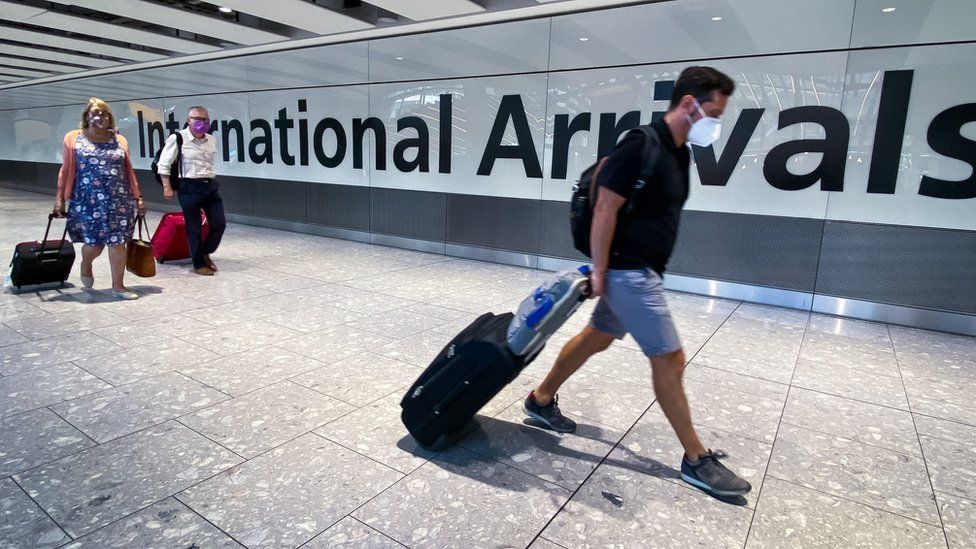 Sajid Javid said experience has shown "we must move quickly and at the earliest possible moment".

No cases of the variant have yet been detected in the UK.

Mr Javid told the House of Commons it was "highly likely" the B.1.1.529 variant had already spread from South Africa and Botswana, where confirmed cases have been found, to other countries.

Travellers from these countries, as well as Namibia, Zimbabwe, Lesotho and Eswatini, will have to self-isolate for 10 days, with those arriving after 04:00 GMT on Sunday required to quarantine in a hotel.

All flights from the six countries are also being suspended until the hotel quarantine system is in operation.

Other countries have also imposed travel restrictions on them, while European Commission President Ursula von der Leyen has called for air travel to the European Union from these countries, and others affected by the variant, to be suspended "until we have a clear understanding about the danger posed by this new variant".

Mr Javid said he was concerned the variant "may pose substantial risk to public health" as it has "an unusually high number of mutations".

He said as well as possibly boosting transmission and affecting vaccine protection, the mutations may weaken the antibody treatment Ronapreve, which is being given to the most vulnerable hospital patients.

"One of the lessons of this pandemic has been that we must move quickly, and at the earliest possible moment," he said.

"We're heading into winter and our booster programme is still ongoing, so we must act with caution."

South Africa, Hong Kong and Botswana have identified just 59 cases of the variant, so far. Belgium announced on Friday afternoon it had Europe's first case of the variant, while Israeli media also reported one case involving a traveller.

Scientists say the variant has 50 mutations overall and more than 30 on the spike protein, which is the target of most vaccines and the key the virus uses to unlock the doorway into our body's cells.

Prof James Naismith, director of the Rosalind Franklin Institute at Oxford University, said: "It's bad news, but it's not doomsday."

The variant would "almost certainly" make vaccines less effective, but they would still work to some extent. New drugs to treat Covid-19 would not be affected by the variant, he suggested.

One scientist told me this was the worst variant they'd seen - look at it on paper and it's not hard to see why.

It is the most heavily mutated variant so far and is now radically different to the form that emerged in Wuhan, China.

That means vaccines, which were designed using the original, may not be as effective.

And some of its mutations are known to increase the ability of coronaviruses to spread.

But there have been many variants that looked bad on paper before, but haven't taken off.

There are early signs this virus is spreading in South Africa and may already be in every province in the country.

But the big questions - how much does it evade vaccines, is it more severe, does it spread faster that Delta - are unanswerable for now.

It had not been proven the variant was more transmissible, but it has mutations consistent with the Delta variant and appeared to spread more quickly than other variants, Prof Naismith told BBC Radio 4's Today programme.

"The travel ban will slow it down," he said. "It will get here but it will give us a few more weeks."

From midday non-UK and Irish residents will be banned from entering England if they have been in the six countries in the past 10 days.

Any British or Irish resident arriving from the countries after 04:00 GMT on Sunday will have to quarantine in a hotel, with those returning before that being asked to isolate at home.

The announcements prompted a slump in airline stocks, with the share price of British Airways' owner IAG dropping by 15%.

Overall, London's main FTSE-100 share index closed down more than 3% and saw its biggest fall in points since the early days of the pandemic in March.

At Cape Town airport, one woman whose sister had just made it on to a flight back to the UK said: "It's absolutely ridiculous they've imposed it again so quickly without really investigating this new variant.

"We're just trying to get on our feet again with tourism and this will just kill it."

But another traveller was unconcerned. "I love being back in Cape Town, so if I get stuck here - what a pleasure!"

Susan Hopkins, chief medical adviser at the UK Health Security Agency, said the variant was the "most worrying that we've seen".

She said scientists needed to learn more about the variant before they could be certain but it appeared that "there's mutations which increase infectivity, mutations that evade the immune response - both from vaccines and from natural immunity - and mutations that cause increased transmissibility".

She said South Africa had a very low rate of cases which more than doubled in two weeks.

But she added the variant, which was first reported on 22 November, could be detected easily with genomic sequencing and it was "reassuring" it had not been seen in the UK yet.

While there have been no cases of the new variant, there have been a further 50,091 Covid cases in the UK and another 160 deaths within 28 days of a positive test, the latest government figures show.

Nearly 400,000 boosters have been administered, meaning about 16.8 million people in the UK have had a third dose of a Covid vaccine - 29.2% of the population aged over 12.

Scotland's First Minister Nicola Sturgeon said it was not time to "press the panic button" over the new variant, and said that there was no need to revisit the recent decision not to extend the nation's vaccine passport scheme. 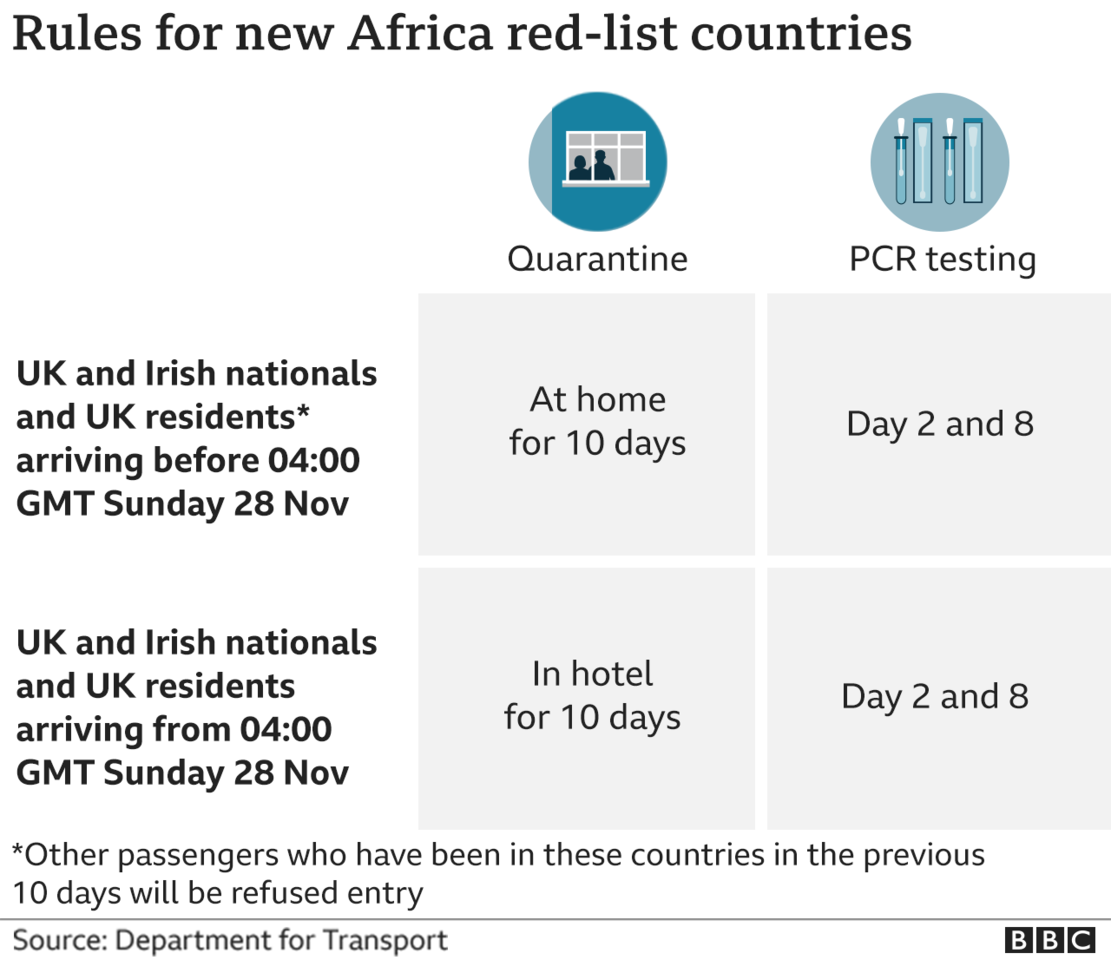 People who have returned to the UK from the six red list countries will be asked to take a PCR test to try to identify any cases.

Several other countries joined the UK in imposing travel restrictions on southern African nations, including Japan, Singapore and Israel.

But a scientist leading efforts in South Africa to understand the new variant, Prof Tulio de Oliveira, said: "The world should provide support to South Africa and Africa and not discriminate or isolate it."

He said the country needed scientific and financial help to ensure the variant does not spread worldwide, including support for deprived people who could not otherwise endure a lockdown.