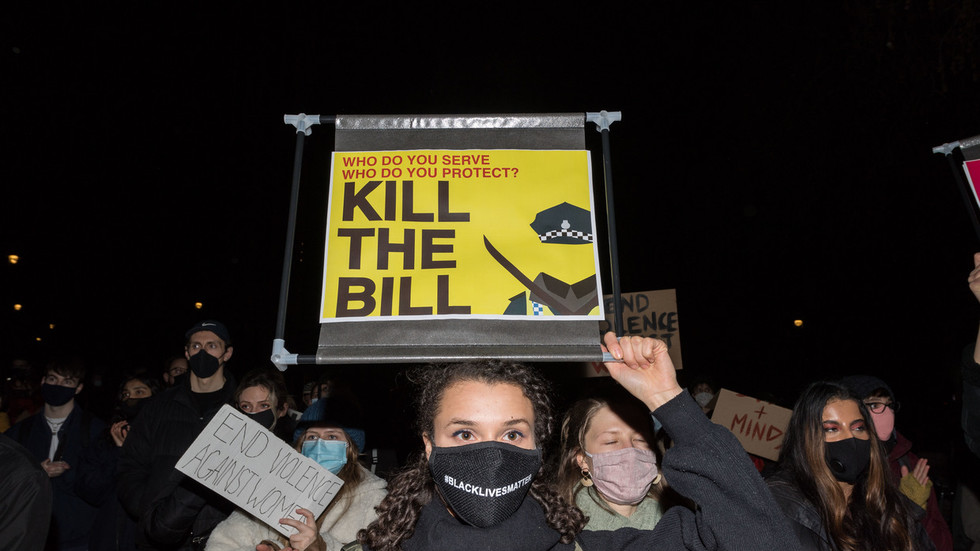 New anti-protest bill targets Britain’s most marginalised, but history shows us that the people will not be silenced

Introduction of new legislation in the UK that will make it more difficult for people to protest is already causing great controversy. A glance at the past suggests the authoritarian measures will not end well for the government.
The Conservative Party is at it again, launching a pre-emptive strike by introducing draconian laws that will try to prevent people coming out on to the streets to protest in the shape of the new Police, Crime, Sentencing and Courts bill.

After all, they know what is coming. We have just spent a year indoors, impotent to what has been happening around us during the pandemic. But at some point, the Government and the public know that we will have to be freed. And when that happens, what will we be coming out to?

I have expressed my fears on RT before, but I’ll reiterate: Landlords have not been lawfully able to evict tenants, and that will change – so mass evictions are on the way. Millions are on furlough, on top of nearly 2 million unemployed. This figure will soar once furlough ends. Our high streets have been devastated, and many pubs, clubs, and live music venues will not reopen.

Britain will be a very grim place, and as new austerity measures arrive, inevitably hurting the poorest the most, as they always do, people will want to protest.

They will want to tell the Government that nuclear weapons and millions of pounds in hand-outs to private companies run by associates of Government ministers through poor procurement deals are unacceptable.

After a year where people’s lives have been devastated in so many ways, hope is what is needed. But what the Government is offering, instead, is the likelihood of state violence.

The Government rushed through the new bill earlier this week by 359 votes to 263 – a majority of 96 – after it was overwhelmingly backed by Tory MPs.

The new legislation has authoritarian Home Secretary Priti Patel’s fingerprints all over it, and includes provisions to crack down on demonstrations if they are too noisy or cause “serious annoyance.” It also seeks to extend the punishment for people who damage statues – up to 10 years in prison – and give more powers to police to shut down peaceful protests. There are even more robust powers intended to criminalise the living circumstances of Gypsy, Roma and Traveller communities.

Like all British Governments, the Tories want order – the British ruling elite love laws and rules, and love harsh penalties if they are breached. No matter which party they represent, or what board of directors they sit on, they need order, as it is the only way this deeply unequal society can function.

Protest and disorder terrify the British ruling class, and draconian measures are always implemented to try to prevent them. And yet the British public have often found ways to navigate the prison sentences, the penalties, the public scorn through the mainstream media and the oppressive policing. Very rarely do we riot, but when push comes to shove it occasionally happens, forcing political change.

The years 1987 and 1988 were busy for the then-Conservative government, with Prime Minister Margaret Thatcher leading a deeply conservative and right-wing cabinet that introduced the Poll Tax to Scotland and then amended Section 28 of the local Government act.

Clause 28 (or Section 28 as it was commonly known) was an open attack on the gay community. It considered LQBTQ relationships immoral and illegitimate, and said that no Government institution could promote any relationship that was not heterosexual.

This had a devastating effect not only on the LGBTQ community, but also on black and working-class families, especially single mothers, as the only family that appeared to be state sanctioned were the conventional ones that were white and middle class. In doing this, the government alienated millions of British people, whose hatred for the Conservative Party ran so deep it has taken a generation for it to recover.

Those marginalised by Thatcher and her Nasty Party tactics found common cause, and the period was full of turmoil rather than order. In March 1990, after a long and successful campaign throughout the country and hundreds of protests, plus mass non-payment of the Poll Tax, thousands gathered in Trafalgar Square in London and after a day of peaceful protest, but with heavy policing, campaigners and officers clashed.

Hundreds of people were injured and hospitalised, and 340 people were arrested. But the levels of anger throughout the country towards the Poll Tax rather than the protesters shocked the Conservatives, and helped pave the way for the replacement of Thatcher by John Major later that year.

Only four years after the Poll Tax protests, Major’s Conservatives were getting jittery again as the youth of Britain engaged in ‘disorder’ by travelling around the country and dancing in fields at raves and festivals. In order to stop this, they introduced The Criminal Justice and Public Order Act 1994, which gave the police greater powers to close down rave parties, and stop any large gathering of people, including protests. The Labour Party did what it does best when faced with a problem that may cost it some middle-class votes, and abstained, while again the Gypsy and Traveller communities were targeted.

So, this latest bill is nothing we haven’t seen before. Yet again, it’s the British government being aware of a grim future for the poorest communities and – allied with their fear of working class and black people, and sections of society who are unwilling to fall into order – realising that new legislation is needed.

But this Conservative government needs to be aware that history will judge it, and those who implement state violence on the British people generally face the consequences. Thatcher’s legacy was people openly cheering her death, the Poll Tax was scrapped and the protesters celebrated rather than denigrated, and former Tory leader David Cameron eventually apologised for Section 28.

This new crime and policing bill is already attracting plenty of debate and discussion, and bringing together strange bedfellows in the shape of freedom-of-speech liberals, anarchists, ex-police chiefs, and even some of the left who are finally seeing beyond their own authoritarian lockdown obsession. They are already getting together online and will soon be meeting up in person, with something concrete to organise around – killing the bill.
#Priti Patel
Add Comment