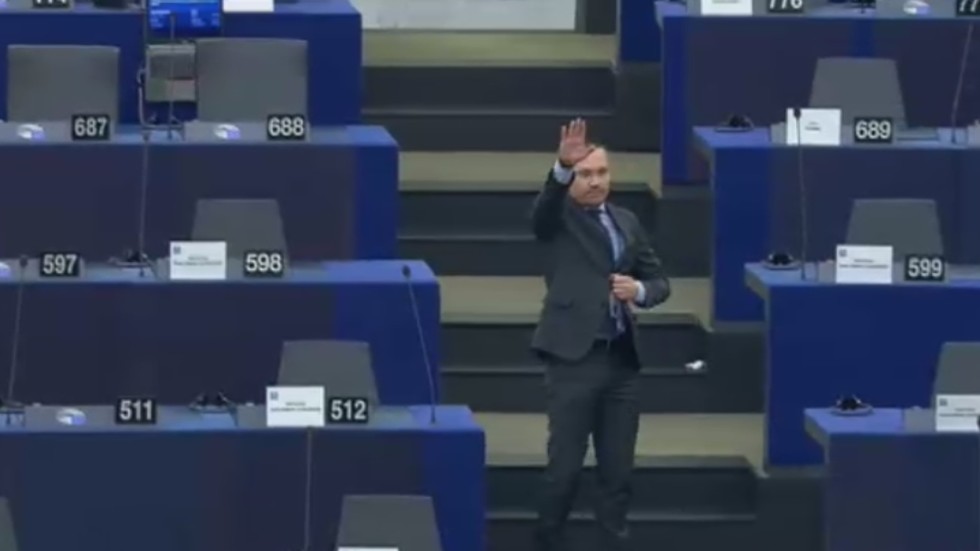 A nationalist MEP from Bulgaria was accused of performing the Nazi salute inside the EU parliament’s debate chamber in Strasbourg, France on Wednesday, after delivering a rebuke to the recent decision by the EU’s top court to allow the cutting of funds to Poland and Hungary. He claimed the incident was a “misunderstanding.”

As he was leaving the chamber, Angel Dzhambazki from his country’s VMRO party briefly stopped, turned, faced the speaker’s podium and extended his right arm in a manner similar to a Nazi salute.

European Parliament President Roberta Metsola slammed the gesture on Twitter. “It offends me and everyone else in Europe,” she wrote. “That gesture is from the darkest chapter of our history and must be left there.”

The incident occurred when MEPs were reacting to the European Court of Justice, which confirmed on Wednesday that Brussels can cut funds to Poland and Hungary. The two countries with conservative governments have been accused by the EU of violating the rule of law at home.

In his floor speech and later in comments online, Dzhambazki dismissed the ruling as “an abomination.”

“There is no sane person who thinks that Hungary and Poland have no functioning rule of law,” the Bulgarian MEP tweeted. “Instead you use it as a whip against the nation states you despise. Long live the nation states of Europe!”

Dzhambazki later told Euronews the outcry was “a simple case of gross misunderstanding.”

The outlet cited a letter Dzhambazki penned to fellow MEPs, explaining that he had wanted to apologize for the language he used in his floor speech by “humbly waving to the chair.”

“Imagine my surprise when as a consequence of this wave I was accused of doing a Nazi salute,” he wrote. “I apologize if my innocent wave… has insulted anyone.”

In 2015, the European Parliament fined Janusz Korwin-Mikke of Poland and Gianluca Buonanno of Italy €3,060 ($3,470) each and suspended them for 10 days for performing Nazi salutes inside the chamber on separate occasions. Both politicians accused the EU’s decision-making body of meddling in member states’ affairs.

AndyPep 89 days ago
He was only telling the truth. The Fascists were left-wing whatever history has been changed to say. Mussolini was the editor of the worlds biggest Socialist magazine before he created Fascism. Hitler naming the Nazi Party, the German Workers Socialist Party wasn't because he was right-wing. He used big business just like the EU and the Democrat Party in America uses them to control us. The big lie is so big it is hard to believe. Believing the entire media has kept the truth from you your entire lives is a shock, to say the least.
Try finding anything about the Hillary Clinton evidence released last week showing her campaign tried to frame Trump with treason. on the BBC. NOTHING, not one mention after 3 years constant Trump is a traitor working for Russia stories. Ya better wake up soon people. This time Boris needs as many of us as possible to spread the truth. Concentration camps in Australia already.
View all comments (1)Add comment