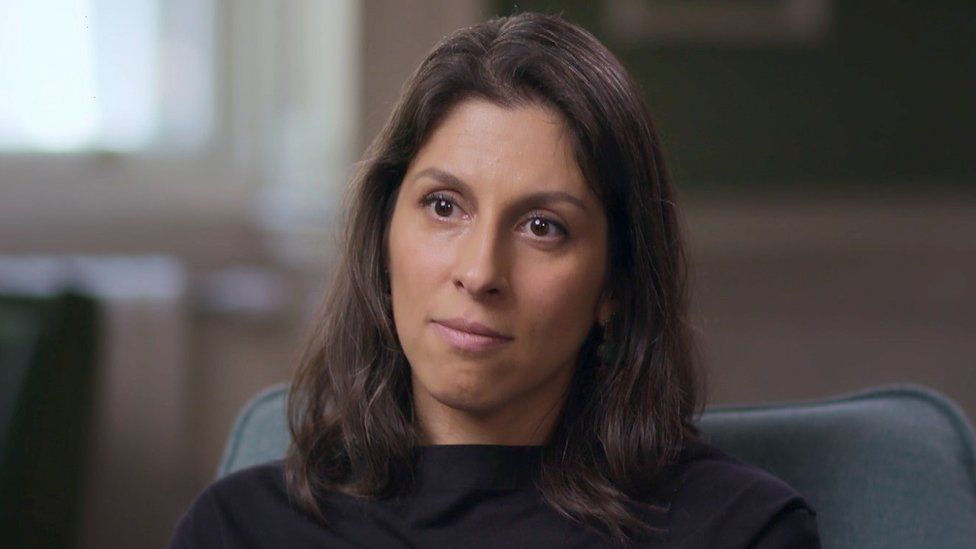 Nazanin Zaghari-Ratcliffe has said Iran forced her to sign a last-minute false confession at the airport as a condition of her release.

Mrs Zaghari-Ratcliffe told the BBC a UK official was there when she signed the statement "under duress" before Iranian authorities would let her fly home.

Her lawyers accuse the UK government of "apparent complicity" in Iran forcing her to sign the false confession.

She was released in March, six years after being arrested on spying charges.

Speaking to the BBC's Emma Barnett for Woman's Hour, Mrs Zaghari-Ratcliffe questioned why the UK did not challenge Iran over forcing her to admit to crimes she did not commit as a condition of her release.

She said she was taken away by Iranian Revolutionary Guards without seeing her parents and "made to sign the forced confession at the airport in the presence of the British government".

Mrs Zaghari-Ratcliffe said she was told she would not be allowed to get on the plane back to the UK without signing the confession, adding that Iranian officials filmed the whole process.

The former political prisoner said she wanted to make sure people knew she had been forced to sign, to prevent the Iranian regime from exploiting her "dehumanising" confession.

"Why would I sign something? I have been trying very, very hard for the past six years to say I have not done it," she said.

"All the false confessions that we have been exposed to, they have no value.

"They are just propaganda for the Iranian regime to show how scary they are and they can do whatever they want to do."

Human rights organisation Redress, acting on Mrs Zaghari-Ratcliffe's behalf, has written to Foreign Secretary Liz Truss criticising "the UK government's apparent complicity in Iran's forcing of Mrs Zaghari-Ratcliffe to sign a false confession as a condition of her release, which has had a lasting impact".

Mrs Zaghari-Ratcliffe's lawyers said she was "deeply distressed" and "shocked to be required by UK government representatives as well as the Iranian authorities, to sign a false confession as a condition of her release".

According to the letter, on 16 March Mrs Zaghari-Ratcliffe was taken to an airport by Iranian officials. Her lawyers claim the UK's lead negotiator told her a confession would have no value and she needed to sign the document if she wanted to get on the plane.

"We regard this forced confession as part and parcel of the pattern of torture Mrs Zaghari-Ratcliffe has suffered since she was first detained in 2016," Redress said.

Redress added the ex-detainee was worried the confession will be used against her in Iran, and criticised the Foreign Office for making "very few efforts" to raise torture allegations with Iranian authorities.

It has also called for an urgent review of the Foreign Office's torture policies.

Her lawyers said they are "deeply concerned" about the Foreign Office's approach to British citizens facing torture abroad, and its "apparent failure" to comply with its own policies and international legal obligations.

Mrs Zaghari-Ratcliffe was arrested in 2016 on spying charges while about to return home from visiting her parents in Iran with her then two-year-old daughter Gabriella.

The charity project manager was sentenced to five years for plotting to overthrow the Iranian government, and then sentenced to another year for propaganda against Iran in 2021.

She always denied the charges and said she was on holiday visiting her family.

She was released from jail in 2020 and spent another year with an ankle tag under house arrest at her parents' home in the Iranian capital city Tehran.

After that she had some freedom to move around the city, but was unable to leave the country because she did not have her passport.

Her release, enabling her to return to the UK along with fellow British-Iranian national Anoosheh Ashoori, came after the UK paid a £400m debt owed to Iran from the 1970s.

Both governments have said the two issues should not be linked but Mrs Zaghari-Ratcliffe told the BBC that in a meeting earlier this month Mr Johnson had said her detention was about the debt.

One last game played by Iran

There's a good reason why the families of hostages held in Iran say they won't breathe easily until their relative is actually on a plane, and out of Iranian airspace.

The big fear is that the deal might fall through - as it did for the London-born environmentalist Morad Tahbaz.

Under the agreement that brought Nazanin Zaghari-Ratcliffe and Anoosheh Ashoori home, he was supposed to have been allowed out of jail to serve his sentence under house arrest. Instead, he was back in his prison cell within 48 hours.

For Nazanin, after years of being toyed with by the Iranian regime, it wasn't a big surprise that it had one last game to play against her.

Being filmed as she signed her confession was not only a final humiliation - it's another card up its sleeve that Iran could use in the future.

Nazanin had no choice but to sign, if she wanted to go home.

And British officials - having finally got Nazanin to the airport - will, presumably, have been desperate not to do anything that might scupper the deal at the very last moment.

In a statement, the Foreign Office said: "Iran put Nazanin Zaghari-Ratcliffe through a horrendous ordeal, right up to the moment she left the country.

"Throughout that time the UK government was working tirelessly to end her unfair detention, but it was always in Iran's gift to release Nazanin and allow her to return to her family.

"We urge the government of Iran to end its practice of unfairly detaining British and other foreign nationals, and we will continue to work with likeminded partners to that end."

Speaking in March shortly after being reunited with her daughter and husband Richard, Mrs Zaghari-Ratcliffe questioned how it had taken so long to secure her release, arguing it should have been arranged years earlier.

Earlier this month, she met Prime Minister Boris Johnson at Downing Street, after being critical of his handling of her case.

Also in her interview, the mother-of-one criticised Boris Johnson for wrongly saying in 2017 that she had been training journalists in Iran. Mr Johnson was foreign secretary in Theresa May's government at the time.

She told the BBC that after his remarks, the Revolutionary Guard accused her of hiding information from them, telling her: "We know that you're a spy. We know what you were up to, even your prime minister mentioned that."

She said: "So I lived under the shadow of his comments psychologically and emotionally for the following four-and-a-half years after that day. You can't undo that."

Mr Johnson has previously apologised in Parliament for the remarks, telling MPs he acknowledged "the words I used were open to being misinterpreted".

However, he did not explicitly apologise to Mrs Zaghari-Ratcliffe at their recent meeting.

British-US national Morad Tahbaz from west London, who also holds Iranian citizenship, was supposed to be released at the same time as Mrs Zaghari-Ratcliffe but remains detained in Iran.

His daughter Rozanne Tahbaz told the BBC she was devastated and the UK should have insisted he too was released home.

"It's also to a certain extent a sort of betrayal because we always were consistently assured by every foreign secretary that's been in place as well as the prime minister himself that my father was going to be treated equal to all of the UK hostages that were being held in Iran," she said.

Mrs Zaghari-Ratcliffe also spoke of her "respect" and "gratitude" for her husband - who spearheaded a long campaign for her release including a hunger strike - for his support through her detention.

"It has been an amazing journey for both of us," she said. "If anything our love has got a lot deeper."