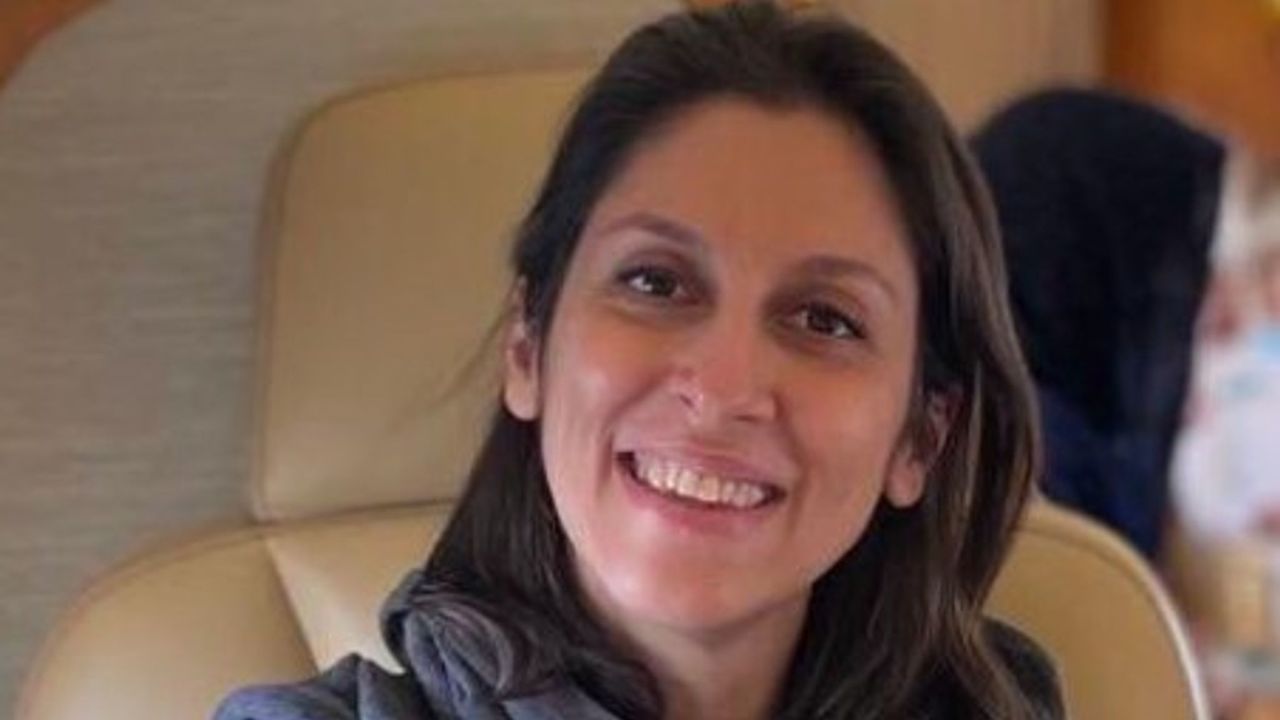 Nazanin Zaghari-Ratcliffe and Anoosheh Ashoori on way home to UK

British-Iranian nationals Nazanin Zaghari-Ratcliffe and Anoosheh Ashoori will be reunited with their families in the UK after being freed from Iran.

Mrs Zaghari-Ratcliffe will return to her husband and seven-year-old daughter Gabriella - who plans to show her mother her new toys.

"It's going to be the beginning of a new life," Richard Ratcliffe said.

Mr Ashoori's family said they could now rebuild the foundations of their family with their "cornerstone back in place".

In a statement, they hailed his release and return to the UK after "five long years" before thanking those who worked to bring him home.

A second man, Morad Tahbaz, who has Iranian, UK and US nationality, has been released from prison but is not yet allowed to leave Iran.

Speaking in the House of Commons, Foreign Secretary Liz Truss paid tribute to the "incredible resolve and determination" shown by Mrs Zaghari-Ratcliffe, Mr Ashoori, Mr Tahbaz and their families, saying the "agonies" they endured "must never happen again".

The government has said it also settled a debt of almost £400m owed to Iran from the 1970s, with the funds ring-fenced solely for humanitarian purposes.

Speaking in the Commons, Tulip Siddiq - Mrs Zaghari-Ratcliffe's MP - said: "Can I say to Nazanin, welcome home, after six long years. And can I say to Gabriella, this time mummy really is coming home."

Paying tribute to Mr Ratcliffe, who watched from the public gallery with Gabriella, Ms Siddiq said he had "really set the bar high for husbands" in his efforts to secure his wife's release.

Mrs Zaghari-Ratcliffe had been held in Iran since 2016 - accused of plotting to overthrow Iran's government, which she denied.

Mr Ashoori was arrested in 2017 and accused of spying, a claim he denied. 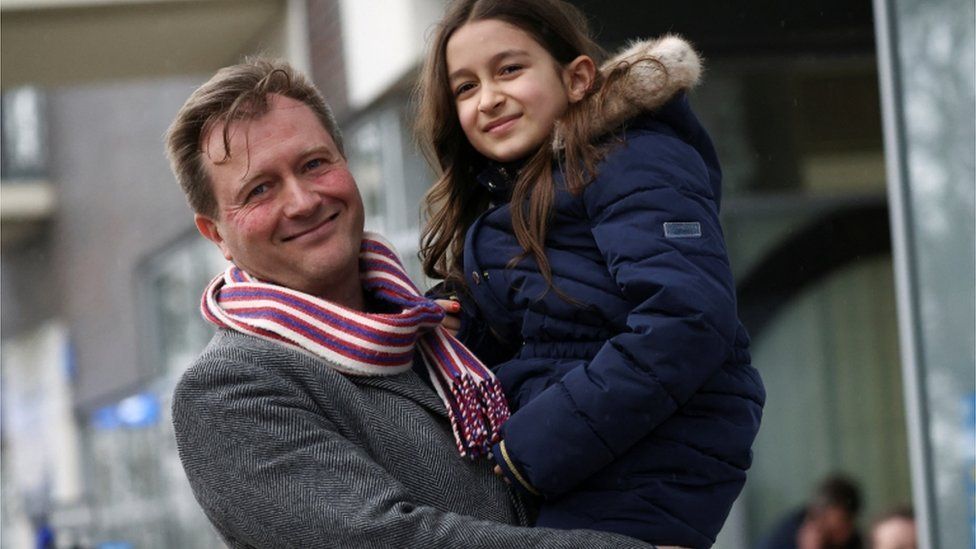 Mr Ratcliffe said his wife's return would mark "the beginning of a new life, a normal life"

Cuddling his daughter, Gabriella, Mr Ratcliffe told journalists they would really believe the news when they saw "Mummy".

He said he wanted to thank people "up and down the country" for supporting his campaign for her release, which included a hunger strike last October.

"Ours has been a cruel experience in some ways, but it's also been an exposure to such a level of kindness and care," he said.

"This will be a chapter in our lives, but there are many more chapters to come."

Speaking after hearing MPs speak in the House of Commons, he told the Press Association the family would "be away for a couple of days recuperating, doctors and check-ups and so on".

He said on returning to their home, the first thing his wife wanted to do was "sit down on the sofa, make a cup of tea, and just be in the living room together" and that he looked forward to "pottering around the neighbourhood and be[ing] normal again".

Mrs Zaghari-Ratcliffe had been under house arrest and was given her UK passport back this week. 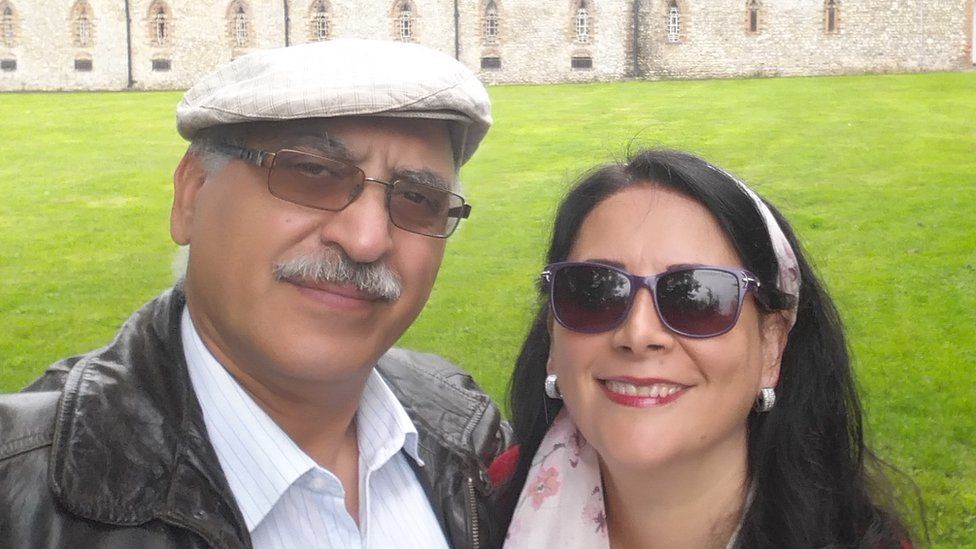 Mr Ashoori's wife Sherry Izadi told the BBC that he was determined to put his ordeal behind him and return to normal life as soon as possible.

She said on his return to the UK he would most be looking forward to hugging his family and his first beer.

Mrs Zaghari-Ratcliffe and Mr Ashoori were flown from Tehran to the capital of Oman, Muscat, and have since left on a plane to the UK.

On Wednesday evening, Ms Siddiq tweeted a new photograph of Mrs Zaghari-Ratcliffe on the last leg of her journey.

Antonio Zappulla, chief executive of the Thomson Reuters Foundation where Mrs Zaghari-Ratcliffe worked as a project manager, said staff were "overjoyed" at news of her release.

He said she had endured "utterly inhumane treatment" over the past six years, including being "denied her freedoms, separated from her husband and young child, battling significant illness, thrown in solitary confinement".

But he added that her freedom was "a ray of light and hope" at a time when the world was "in turmoil and the news has been consistently bleak".

Why has Nazanin Zaghari-Ratcliffe been freed now?

There have been repeated attempts to secure Nazanin Zaghari-Ratcliffe's release - all failed. So why is she now on her way home?

The basic answer is London-Tehran relations are better than they have been.

There was almost a deal last year but since that fell through British diplomats have visited Iran several times to try to reach a fresh agreement.

Iranian officials at their Ministry of Foreign Affairs were frequently frustrated that this dispute got in the way of the rest of the UK-Iran relationship.

But the Iranian diplomats were not in charge - the International Revolutionary Guard and the judges were.

Eventually, enough people with the Iranian government seemed to have realised that a permanently hostile relationship with the UK was not in Tehran's best interests.

That might apply directly to talks taking place in Vienna, designed to revive the agreement under which Iran limited its nuclear activities in return for seeing economic sanctions lifted.

Prime Minister Boris Johnson said it was "fantastic" Mrs Zaghari-Ratcliffe had been freed and could return to her family and that he was also "thrilled" for Mr Ashoori and Mr Tahbaz.

A £393.8m debt relating to a cancelled order for 1,500 Chieftain tanks dating back to the 1970s had been linked to the continued detention of Mrs Zaghari-Ratcliffe and other UK-Iranian dual nationals held in the country - although the government had previously said the two issues should not be connected.

Foreign Minister Hossein Amir-Abdollahian said Mrs Zaghari-Ratcliffe and Mr Anoosheh had been freed on "humanitarian grounds" and that it would be "wrong" to link the UK's payment of its debt to Iran to their release.

Labour leader Sir Keir Starmer said it was "an incredible moment" for Mrs Zaghari-Ratcliffe and her family after an "unimaginable ordeal".

He added that there would be questions to be answered about "what happened along the way", but at present his thoughts were with the family.