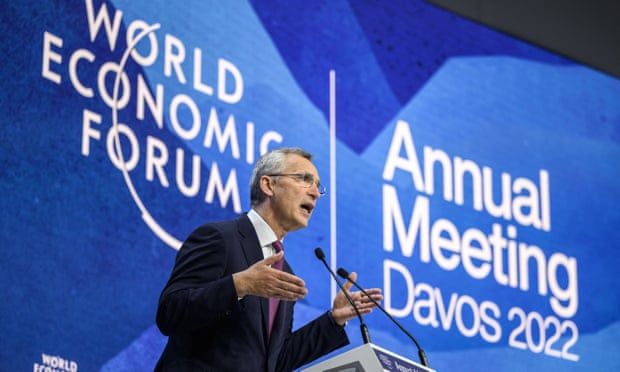 Jens Stoltenberg, the secretary general of the western military alliance, said countries would be making a mistake if they traded short-term economic gain for long-term security.

The Nato head said globalisation had brought many economic benefits but the war in Ukraine had exposed how ties with authoritarian regimes created vulnerabilities.

Breaking down barriers in the pursuit of free trade had left Europe dependent on Russian oil and gas, involved the sharing of technology that risked the west losing its technological edge in modern weaponry and opened the door to foreign control of vital infrastructure such as 5G networks.

“If we share the technology we may earn the money but undermine western security,” Stoltenberg said. “This is about Russia but it is also about China.”

As a former prime minister of Norway, Stoltenberg said he had worked to create a more global economy. “But our economic choices have consequences for security,” he said.

“I am not arguing against trade with China but I am saying the control over 5G networks is of vital security importance,” he said.

“We cannot say that in the interest of profits and free trade we just open up those networks also for suppliers that actually are not reliable when it comes to our security,” Stoltenberg added.

The Nato secretary-general said the build up of western forces in eastern Europe was intended to deter Russia from further aggression and there was no intention to become involved in military action. “This is deterrence, not to provoke a conflict but to prevent a conflict and preserve peace,” he said.

Ursula von der Leyen, the president of the European Commission, said Russia’s decision to “weaponise its food supplies” would have global repercussions. Russia was “using hunger and grain to wield power” and blackmail other countries, she added.

“In Russian-occupied Ukraine, the Kremlin’s army is confiscating grain stocks and machinery. For some, this has brought back memories from a dark past – the times of the Soviet crop seizures and the devastating famine of the 1930s,” Von der Leyen said in a special address.

She said there were 20m tonnes of wheat stuck in Ukraine. That has created a shortage that has sent global wheat prices rocketing, and meant food shipments from Odesa could not reach Somalia.

Von der Leyen said Europe was opening solidarity lanes, linking Ukraine’s borders to its ports, stepping up its own production, and working with the World Food Programme to get supplies to vulnerable countries. “Global cooperation is the antidote to Russia’s blackmail,” she said.

Achim Steiner, the administrator of the UN Development Programme (UNDP) said 200 million people were facing acute hunger, double the figure of five years ago. “This is very serious,” he said.
Add Comment