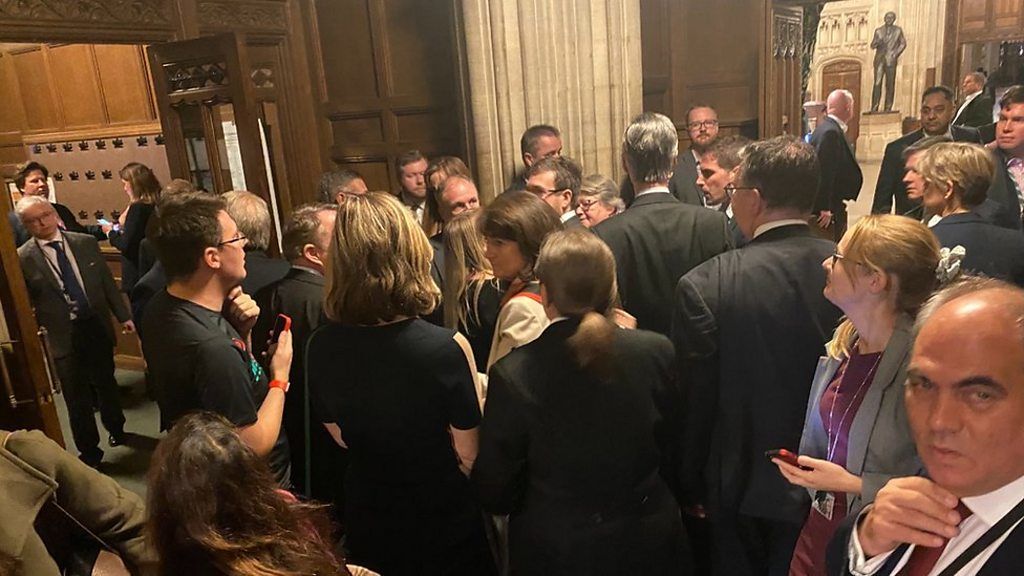 Conservative MPs were bullied and manhandled into backing Liz Truss in a vote on fracking, according to MPs who witnessed the scenes.

Ministers denied claims physical force had been used to persuade colleagues to vote with the government.

But Labour MP Chris Bryant called for an inquiry into what "looked like bullying".

There had been suggestions earlier that Chief Whip Wendy Morton and her deputy had left their roles.

However, the government has confirmed that both MPs are staying in post.

One furious Tory MP described the chaotic events as a "shambles and a disgrace".

Visibly shaken, senior Conservative MP Charles Walker said what he saw as "inexcusable" and there was "no coming back" for the government.

To Tory MPs who backed Liz Truss to be prime minister, Mr Walker said "I hope it was worth it".

Speaking later to the BBC's World Tonight, he said: "I expect the prime minister to resign very soon because she's not up to her job."

When asked about allegations made by MPs, Business Secretary Jacob Rees-Mogg told Sky News to "characterise it as bullying was mistaken".

Mr Bryant spoke in the House of Commons after Labour lost a vote on banning fracking despite a Tory rebellion.

He said MPs should be able to vote "without fear or favour", saying "we want to stand up against bullying".

Labour had tried to use the vote to force the introduction of a law to ban fracking.

Tory whips ordered their MPs to vote against the motion or face being suspended, telling them it was a test of confidence in Ms Truss.

But the process was thrown into confusion at the last minute when Climate Minister Graham Stuart suggested it was not a confidence vote.

Chaotic scenes in the voting lobby followed, as whips tried to get Tory MPs to oppose the Labour motion.

The list on Parliament's website, which shows how MPs vote, reveals that 40 Conservative MPs did not take part, including Ms Truss and Chief Whip Wendy Morton.

Labour shadow minister Anna McMorrin wrote on Twitter that she witnessed one Conservative MP "in tears" in the lobby after the vote.

Ms McMorrin tweeted: "Extraordinary stuff happening here during the vote on fracking which is apparently 'not a confidence vote'.

"I've just witnessed one Tory member in tears being manhandled into the lobby to vote against our motion to continue the ban on fracking."

Labour's shadow secretary of state for Scotland, Ian Murray, said he witnessed "whips screaming at Tories" and described it as "open warfare".

However, in a tweet one Conservative MP Alexander Stafford pushed back against the claims, saying he had a "frank and robust conversation outside the voting lobbies confirming my opposition to fracking, with members of the government, nothing more".

"No one pushes me around," he added.

The vote was the first parliamentary test of the government's fracking plans, but was never likely to overturn government policy, given the size of the Conservatives' majority.

WATCH: 'That looked like bullying to me' - Chris Bryant