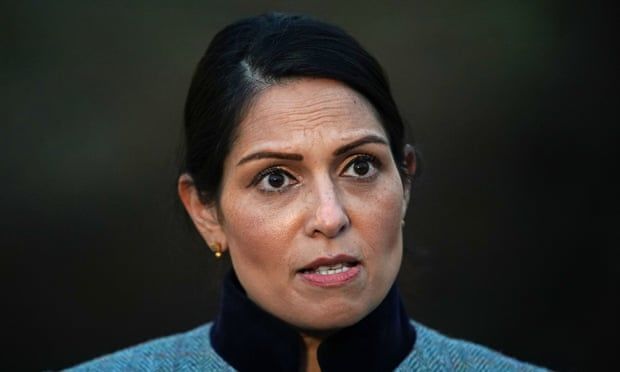 Priti Patel says government will oppose Lords amendment when police, crime, sentencing and courts bill returns to parliament
Ministers will reject making misogyny a hate crime in England and Wales and urge MPs to get behind controversial legislation that has been criticised for curbing the right to protest as the government seeks to push through major changes to the criminal justice system.

In a move which will set up a clash with Conservative backbenchers and opposition MPs when the police, crime, sentencing and courts bill returns to parliament next week, the home secretary, Priti Patel, will write to members on Monday saying the government will oppose a Lords amendment that would extend hate crimes to cover misogyny.

The Home Office said its rejection is based on a Law Commission report, which warned that extending hate crimes to cover misogyny would prove “more harmful than helpful” to victims of violence against women and girls.

The government says it is also “carefully considering” a new offence of street harassment that would criminalise the verbal abuse of women, pestering and persistent cat-calling or making lewd comments.

A new Scottish standalone offence of misogyny is under discussion by an expert working group and is expected to report to ministers in Edinburgh this month.

The letter comes after the government has been forced into a series of concessions on crime and violence against women and girls over the last few months.

Responding to the letter, Yvette Cooper, the shadow home secretary, condemned Patel for failing to introduce new legislation to tackle hatred against women.

“It is shameful that the home secretary is still refusing to make violence against women and girls a strategic policing requirement so it has the same prominence as tackling organised crime.

“She is also still refusing to establish specialist rape units in every police force area or minimum sentence for rape and stalking, and shockingly is still resisting Labour’s proposals for action against landlords who pressurise tenants into sex for rent,” she said.

The House of Lords inflicted a string of defeats on the bill last month, which saw the upper chamber reject controversial measures designed to combat the tactics adopted by groups including Extinction Rebellion and Insulate Britain and on a separate clause that would have imposed noise restrictions on demonstrations.

Peers also voted against new powers that would give police powers to stop and search those who they suspect of taking part in illegal protests.

The upper chamber can delay, though not entirely block, legislation, but its actions can often embarrass and stall government plans.

The bill returns to the Commons next week for a round of parliamentary ping-pong, where legislation passes between the two houses until an agreement is reached.

The Home Office said the revised version of the draft law going before the Commons will tighten a number of measures, including extending the time limit for prosecution of common assault or battery in domestic abuse cases.

Officials said the “enhanced” version of the draft legislation would also include introducing “Harper’s law”, which will extend mandatory life sentences to those convicted of the unlawful manslaughter of an on-duty emergency worker.

It follows a campaign by the widow of PC Andrew Harper, who was killed while responding to a quad bike theft by three teenagers in August 2019.

Addressing peers’ amendment on adding misogyny as a hate crime, the Home Office cited how a Law Commission review had found that legislating to make misogyny a hate crime would prove “more harmful than helpful” to victims of violence against women and girls.

Home Office officials said ministers would also “continue fighting” to bring in increase police powers for dealing with “highly disruptive protests”, a policy that has sparked “kill the bill” demonstrations across the country.

Announcing her intention to write to MPs on Monday, Patel said: “There are still too many criminals getting off with inadequate sentences for appalling acts of violence and sexual offences and still people who feel unsafe walking the streets or in their own homes.

“This bill is vitally important as we overhaul the criminal justice system and make our streets safer.”
#Priti Patel
Add Comment