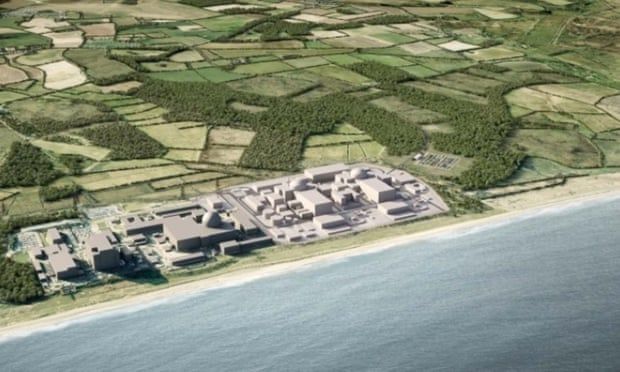 Exclusive: deal in which UK government would take stake in Sizewell C would risk inflaming geopolitical tensions
Ministers are closing in on a deal that could kick China off a project to build a £20bn nuclear power station on the Suffolk coast and pump in tens of millions of pounds of taxpayer cash instead – a move that would heighten geopolitical tensions.

The government could announce plans to take a stake in Sizewell C power station, alongside the French state-backed power giant EDF, as early as next month, ahead of the Cop26 climate summit.

That would be likely to result in China General Nuclear (CGN), which currently has a 20% stake in Sizewell, being removed from the project.

It risks inflaming political tensions, which are running high after Britain’s decision to join the Aukus nuclear submarine pact with the US and Australia – a move designed to counteract China’s military expansion. CGN, the power giant backed by the communist state, is also bankrolling EDF’s Hinkley Point C power station in Somerset.

Sizewell, which is still going through planning and development, would eventually power 6m homes, but has been plagued by opposition from local campaigners, fears over its price tag and China’s involvement.

Washington has been leaning heavily on Westminster to remove China from Britain’s nuclear power plans, blacklisting CGN, citing fears over national security and accusing it of stealing military technology – claims it denies. The former US secretary of state Mike Pompeo last year urged Britain to choose sides in the battle to develop nuclear technology, saying it “stands ready to assist our friends in the UK with any needs they have”.

Under plans for Sizewell being discussed by Whitehall officials and EDF, the government could take a stake in a development company that will push it through various stages of planning and bureaucracy, sharing the costs with EDF.

Private sector investors such as the insurance funds L&G and Aviva would then be lured in at a later stage in return for a government-backed funding model called the regulated asset base (RAB), diluting the taxpayer and EDF. Legislation on RAB funding – the same model used to fund airports such as Heathrow and water companies – is due to progress through parliament next month.

EDF’s board is due to hold a meeting in November to discuss pushing Sizewell forward but is understood to be wary about pumping tens of millions into the project without firm commitment from Westminster.

EDF has been lobbying intensively for a RAB mechanism, arguing that it could slash the “strike price” – the guaranteed price for Sizewell’s electricity – to between £30 and £60 per megawatt hour. Hinkley’s £92.50 MWh strike price has been criticised as excessive at a time when offshore wind costs are falling.

All but one of Britain’s eight existing nuclear power stations, which provide up to 20% of its electricity, are due to close by the end of the decade, resulting in a huge gap in low-carbon power generation.

The global gas crunch and soaring energy bills have cranked up the pressure on ministers to act, and ministers are keen to announce a deal on Sizewell next month, ahead of November’s Cop26 climate summit in Glasgow. The business secretary, Kwasi Kwarteng, is understood to be pushing the Treasury for a large slice of spending on nuclear power in the 27 October spending review.

Kicking China off Sizewell would effectively tear up the government’s 2015 deal with CGN, under which it agreed to fund Hinkley and Sizewell, and then install its own reactors at a third site at Bradwell in Essex. The chances of CGN getting approval to build its reactor in Britain are seen as slender. That deal was seen as the pinnacle of the “golden era” between Britain and China.

Pressure to remove China has ratcheted up under Joe Biden’s administration, with executives from the US construction giant Bechtel teaming up with Westinghouse, the US nuclear technology company owned by Canada’s Brookfield, to develop another nuclear power station, at Wylfa on Anglesey.

In their pitch to the government, they said the project would strengthen the “special relationship”. “Through a successful partnership at Wylfa, the UK and US will share a common interest in promoting the use of this secure, reliable technology in new markets to compete against state-backed Russian and Chinese options,” they wrote.

Stephen Thomas, a professor of energy policy at Greenwich University, said: “CGN’s motivation in supporting the Hinkley Point and Sizewell projects was to secure a chance to build its own reactor design at Bradwell. With Bradwell now off the table it’s unlikely they would be interested in the Sizewell investment.

“CGN may still persist with approving its reactor design with the UK authorities to secure that gold standard accreditation, but this is where its UK nuclear ambitions are likely to end,” he said.

The business department said: “Nuclear power has a key role to play as we work to reduce our reliance on fossil fuels and exposure to volatile global gas prices.

“CGN is currently a shareholder in Sizewell C up until the point of the government’s final investment decision. Negotiations are ongoing and no final decision has been taken.”
#Joe Biden
Add Comment