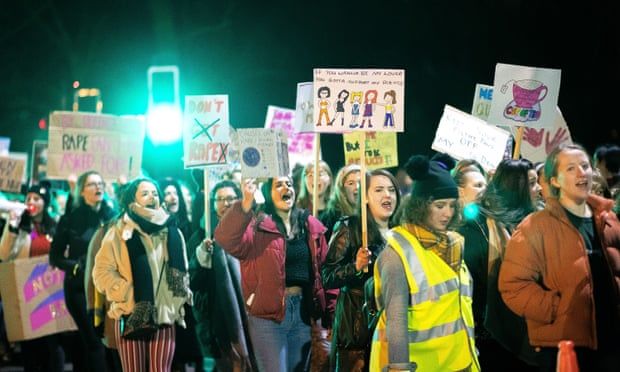 Ministers have apologised unreservedly to rape victims, saying they are “deeply ashamed” that thousands of survivors have been failed on the government’s watch, as they pledged an overhaul of the criminal justice system.

A long-awaited government review into a precipitous decline in rape prosecutions promises sweeping reform of how cases are handled in England and Wales, including targets for the Crown Prosecution Service (CPS) and police to increase the number of prosecutions, and plans to shift the focus of investigations from the victim’s credibility to the perpetrator.

But while charities and victim groups welcomed the apology, they said the measures lacked urgency and were underfunded.

Vera Baird, the victims’ commissioner for England and Wales, said it was right that ministers had “voiced their shame” and resolved to reverse the downward trend in prosecutions, but added that there was “no hiding that this review presents some missed opportunities”.

The lord chancellor, Robert Buckland QC MP, said he was “deeply sorry” many victims had been denied justice “as a result of systemic failings” after years of austerity. “We will not rest until real improvements are made – from transforming the support given to victims, to ensuring cases are investigated fully and prosecuted robustly,” he said. 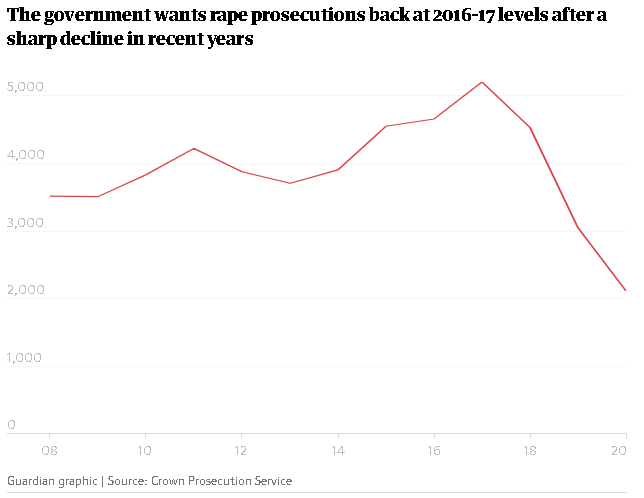 The police and the CPS have been ordered to work together to increase the number of rape cases making it to court and return prosecutions to 2016 levels before the end of this parliament.

A pilot named Operation Soteria, which pushes police and CPS to focus investigations on suspects rather than complainants’ credibility, will be rolled out across four forces by the end of the year with the intention of implementing a national “radical new operating model”. Funding of £3.2m to cover the project for 12 months will come from the Home Office.

Sarah Crew, the National Police Chiefs’ Council’s lead for rape, said the service was “absolutely committed to doing better”, while the director of public prosecutions, Max Hill, said he was “determined to lead meaningful and lasting change”.

“Scorecards” that measure “timeliness, quality and victim engagement … and implementation of the action plan” will be published every six months. The crime and policing minister, Kit Malthouse, has been given responsibility for overseeing the implementation of the rape review, and will head a monthly external taskforce including the victims’ commissioner, the domestic abuse commissioner, victims’ groups and representatives from the criminal justice agencies.

“We’ve taken a hard and honest look at how the entire criminal justice system deals with rape, and in too many instances it simply has not been good enough,” said Malthouse, who added that the police and CPS would be “more accountable than ever”.

In a warning shot across the bow for the agencies involved, the review states that should the already-launched CPS-police joint action plan not be enough to improve outcomes, “further proposals … will be considered”.

The review followed a series of revelations in the Guardian and sustained campaigning from victims’ groups about the failings over rape prosecutions.

It recommends an overhaul of the treatment of rape complainants, in an attempt to tackle the growing number of those dropping out of cases – in the past five years the attrition rate has increased from 25% to 43%.

A pilot allowing victims to pre-record their evidence and cross-examination, to spare them the trauma of attending court, is being extended from three to six courts and if successful will be rolled out nationally.

In a raft of proposals, the review also advises that victims:

*  Should no longer be subject to a “digital strip search” of their communications, and only evidence that is pertinent to a rape case should be used at court.

*  Have their phones returned within 24 hours, with a replacement being provided during that time.

*  Have access to therapeutic and clinical support, with the ambition of boosting the number of Independent Sexual Violence Advisors (ISVA) by 700.

*  Receive clear and prompt engagement from first report to trial, and better information about their rights.

The review was announced in an attempt to halt a major drop in rape prosecutions, which have fallen to historic lows since 2016, while rape reports have doubled.

Convictions have also fallen to a record low. According to Guardian analysis of the most recent quarterly figures, there were 1,917 fewer rapists convicted in the year to December 2020 than in 2016-17, a decline of 64% – the CPS secured 2,991 convictions four years ago, compared with 1,074 last year.

Andrea Simon, the director of the End Violence Against Women Coalition (EVAW), said that while the review showed a desire to fix the justice system for rape survivors, there was “a distinct lack of urgency, measures which reflect the ambition needed and resourcing of plans to make this a reality”. 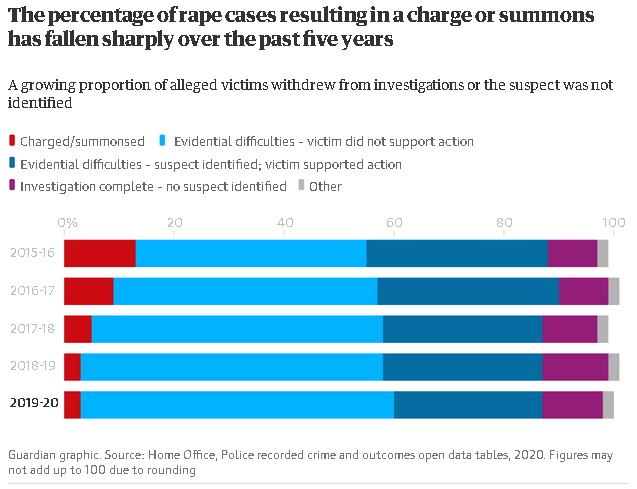 In a joint statement, Evaw, the Centre for Women’s Justice, Imkaan and Rape Crisis said the review proposed pilots and consultations that may not see results for years, instead of taking urgent action. They added that not enough work had been done to support minority groups and their access to justice.

The organisations have previously accused the government of failing to engage with victims, and Simon noted: “Unfortunately these recommendations reflect this failure to hear from survivors themselves.”

The review also examined why the number of prosecutions had fallen to such a degree. A legal case brought by Evaw and the Centre for Women’s Justice accusing the CPS of raising the bar for charging was dismissed in March. The review concludes that the reasons are “complex”, and include an increase in demands for digital data, investigative delays, “strained relationships” between different parts of the criminal justice system, a lack of specialist resources and “inconsistent” support for victims.

The report does not directly mention the impact of austerity or cuts, despite the fact that since 2010 the CPS has faced a 25% budget cut and a 30% reduction in staff, while police forces in England and Wales lost 21,732 officers between March 2010 and March 2018 (15% of their total number).

As part of the review, the Law Commission will consider reforms “to increase the understanding of consent and sexual harm and improve the treatment of victims, while ensuring that defendants receive a fair trial”. It will also examine rape myths and the use of victim’s sexual history and medical records as evidence.