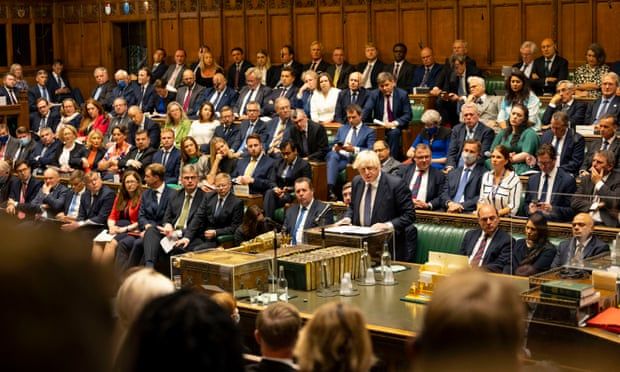 Cabinet ministers have been accused of undermining Covid advice and putting MPs’ and parliamentary staff’s safety at risk by declining to wear masks, as they packed the Commons chamber full to debate Afghanistan’s takeover by the Taliban.

Just two government frontbenchers chose to wear a face covering when parliament was recalled on Wednesday – the Cabinet Office minister, Michael Gove, and the new security minister, Damian Hinds – despite official guidance recommending they are worn in “crowded and enclosed spaces”.

Ministers lifted the mandatory requirement for masks to be worn in most places on 19 July, instead allowing people to make their own decisions about whether and where to use them. However, the Commons Speaker, Lindsay Hoyle, has urged MPs to continue wearing masks in the chamber, although he has admitted he cannot force them to do so. 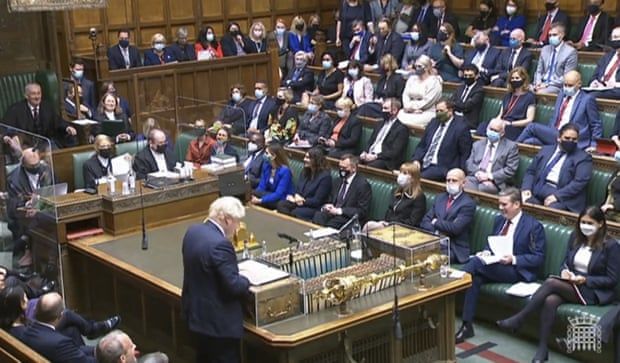 During the debate on the situation in Afghanistan, opposition Labour party MPs sat in parliament nearly all wearing face masks.

When Boris Johnson opened the debate about the collapse of the Afghan government he was without a mask, as were most of the other ministers sitting on the front green bench. The two who were masked were sitting on the end of the row close to Hoyle.

The sight of MPs rubbing shoulders was an unfamiliar sight for many Westminster watchers, as social distancing was only dropped a few days before parliament went into recess last month. There had previously been a capacity limit of 64 people in the chamber – but the first time this was notably exceeded was on Wednesday.

Among swathes of unmasked Conservatives, there were some other notable exceptions among the backbenchers: the former prime minister Theresa May, the head of the health select committee, Jeremy Hunt, and Dr Luke Evans.

All the Labour frontbenchers, including the party leader, Keir Starmer, and his deputy, Angela Rayner, wore masks.

Mike Clancy, the general secretary of the Prospect union, which represents many parliamentary staffers, said it was frustrating so many Conservative MPs “chose to ignore the Speaker’s very clear advice about wearing masks in an enclosed space”.

He added: “Not only does this show huge disrespect to the Speaker, it demonstrates contempt for the safety of their colleagues and the many staff attending the packed chamber who are required to wear masks.

“It is abundantly clear that large numbers of MPs believe that rules simply don’t apply to them, and are comfortable with recklessly undermining public health messaging.

“With the Commons set to resume full-time in just a few weeks, it is time to rethink the light-touch approach to mask wearing in the chamber. It has demonstrably failed, and more rigorous enforcement must be considered.”

Sir Jeremy Farrar, the director of the Wellcome Trust and a member of the government’s Scientific Advisory Group for Emergencies (Sage), tweeted that it was “sad and regrettable when an issue such as wearing of masks becomes a party political issue”.

A House of Commons spokesperson said: “Our priority is to ensure a safe and functioning parliament in line with government regulations.

“Passholders should continue to exercise caution when they are on the estate and we will, of course, monitor the situation from day to day.”