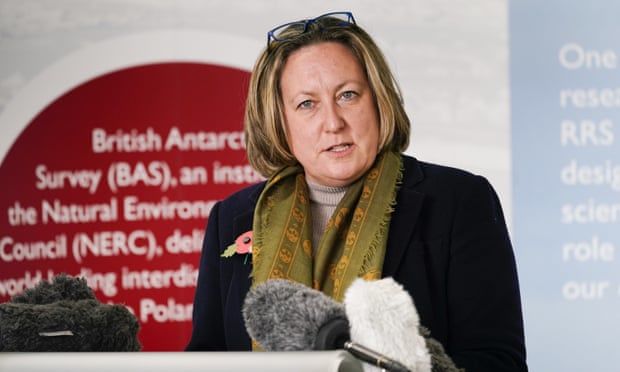 Anne-Marie Trevelyan’s remarks come before Commons debate on sleaze
A cabinet minister has said she backs a ban on MPs having lobbying-based second jobs after Owen Paterson’s departure from parliament, in the run-up to a Commons debate on wider allegations of sleaze that Boris Johnson is not expected to attend.

Anne-Marie Trevelyan, the international trade secretary, said she would support a plan considered by the Commons standards committee for MPs to be barred from paid lobbying on behalf of commercial interests, as Paterson did.

Trevelyan told Sky News: “I think the question of MPs having jobs that involve lobbying perhaps should be looked at again. But, across the board, I don’t think we should have a removal of the ability to maintain a second job, because it brings a richness to our role as members of parliament.”

Johnson would be likely to not be in the chamber for the Monday afternoon emergency debate, and would instead watch it on television and allow Jacob Rees-Mogg, the Commons leader, to speak for the government, Trevelyan added.

Saying she did not know for certain the arrangements for the debate, called by the Liberal Democrats, Trevelyan said: “My opinion would be that no, he shouldn’t be there. He will no doubt – as we all do – have the House of Commons on in his office as he’s dealing with many, many other issues that only a prime minister that can deal with.

“He will get a briefing of the key issues raised by colleagues from across the house later on, I believe that the (Commons) leader and other ministers will be well placed to take the dispatch box this afternoon.”

Trevelyan also confirmed the Commons Speaker, Lindsay Hoyle, is to make a statement on the wider issue of MPs’ standards and the way complaints were investigated, after a government-prompted vote to overturn the punishment faced by the Conservative backbencher Paterson for breaking lobbying rules, a decision then rapidly reversed. Paterson quit his seat on Thursday when the government U-turned.

The debate on Monday, Trevelyan said, would mean “concerns from many colleagues” around the issue of whether the standards system had a sufficiently full method for appeal. She added: “I understand the Speaker of the House will also be making a statement later on to identify how we can move forward to help solve that issue.”

MPs are permitted to work as consultants but are generally not allowed to lobby directly on behalf of the organisations they work for. Paterson was found to have broken the rules “egregiously” in lobbying for two companies, including the clinical diagnostics company Randox, which won huge government contracts for Covid-related work.

Allegations of corruption against the government widened over the weekend after the Sunday Times reported that all 16 of the Conservative party’s treasurers, excluding the current incumbent, had been made peers with each donating an average of £3m to the party.

Asked if the claim was correct, Trevelyan said: “I don’t have the statistics in front of me,” adding that she had not seen the article.

However, she defended the wider system, saying it would be wrong to stop rich people from going to the Lords: “People are put forward for peerages for all sorts of reasons, and I don’t think that someone who happens to have been an extremely good businessman, and made a great deal of money through business activity, usually also an enormous amount of philanthropy, amazing people of all political colours, that they should be barred from going to the House of Lords.”
#Boris Johnson  #Johnson  #Covid
Add Comment