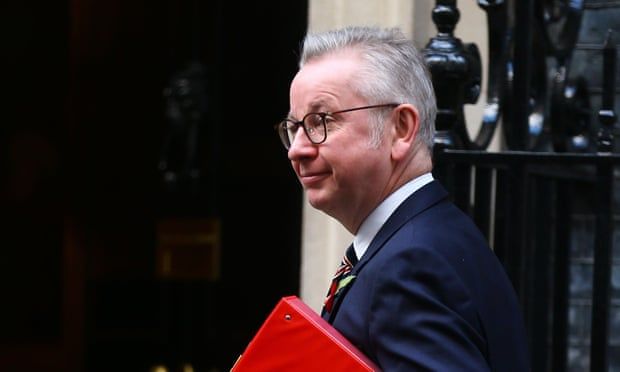 David Meller’s company was among 47 awarded PPE contracts after referrals from politicians and officials
A Conservative party donor who supported Michael Gove’s Tory leadership bid won £164m in Covid contracts after the minister referred his firm to a “VIP lane” that awarded almost £5bn to companies with political connections, new analysis reveals.

The disclosure draws Gove into a furore over alleged cronyism that has led critics to accuse the government of running a “chumocracy” where MPs’ friends, contacts or acquaintances have won huge contracts without proper process or transparency.

Meller Designs, based in Bedford, was awarded six personal protective equipment (PPE) supply contracts worth £164m from the Department of Health and Social Care (DHSC) during the coronavirus pandemic.

Until January this year it was co-owned by David Meller, who has donated nearly £60,000 to the Tory party since 2009. This included £3,250 to support Gove’s party leadership bid in 2016, a campaign on which Meller worked as chair of finance.

When the contracts were awarded, Gove was a minister at the Cabinet Office, which is responsible for government procurement, and in charge of the office of the chancellor of the duchy of Lancaster, which referred Meller Designs for PPE supply.

The company was among 47 awarded contracts for PPE totalling £4.7bn after referrals from politicians and officials, according to a Guardian analysis. Several were linked to MPs, all of them Conservative. Due to the health emergency, many contracts were awarded without competitive tender.

The list of 47 companies awarded contracts via the VIP lane was published by Politico on Tuesday before its official planned release by the DHSC after a freedom of information request by the Good Law Project, which is challenging the propriety of some contracts.

The VIP or “high-priority” route was a fast-track process set up by DHSC procurement teams for offers to supply PPE from companies referred by ministers, MPs, NHS officials or other people with political connections. A report by the National Audit Office last year found that firms referred to the VIP lane had a 10 times greater success rate for securing contracts than companies whose bids were processed via normal channels.

Labour has repeatedly accused the government of favouring people with Tory party connections in the awards of multimillion-pound contracts during the pandemic.

The list of companies includes 18 whose contracts were processed through the fast track after being referred by a Conservative MP, minister or peer. When questions were first asked about the process last year, the government responded that referrals were a way of filtering credible offers that came to MPs and ministers. However, only companies referred by Conservative politicians are on the list of those awarded contracts.

Another Tory peer, the lingerie businesswoman Michelle Mone, is stated to have referred one company, PPE Medpro, which was awarded two contracts worth £200m via the VIP lane. Corporate services including accounting and directorships were provided to the company by Knox House Trust (KHT), an Isle of Man firm run by Mone’s husband, Douglas Barrowman.

Mone, who made her career and fortune with her Ultimo lingerie company, last year denied to the Guardian via her lawyers that she had “any role or function in PPE Medpro, nor in the process by which contracts were awarded to PPE Medpro”. Mone’s lawyers told the Guardian she maintains her denial of involvement.

Angela Rayner, Labour’s deputy leader and the shadow chancellor of the duchy of Lancaster, said in relation to Gove: “It shows just how engulfed in corruption this government is that the minister in charge of procurement and ensuring that contracts are awarded to the best bidder and represent value for money for the taxpayer was helping his own donor to get VIP fast-track access to contracts.

“It is time this … government published the full details of every PPE and testing contract awarded to companies with links to the Conservative party, Conservative ministers and Conservative MPs.”

A spokesperson for Gove denied that the referral involved any impropriety, saying he passed on offers to supply PPE. “The former minister for the Cabinet Office played no role in the decision to award any PPE contract, and all ministerial interests were properly declared to officials,” they said.

A spokesperson for David Meller said he had nothing to add to a previous statement provided by Meller Designs, which said it had approached the government offering to supply equipment and was “extremely proud” of the role it played in supplying “more than 100m items of PPE”.

The Cabinet Office has refused Freedom of Information Act requests from the Guardian to release correspondence between Meller and Gove during the pandemic.

A lawyer for Mone and Barrowman said: “Baroness Mone is neither an investor, director or shareholder in any way associated with PPE Medpro. She has never had any role or function in PPE Medpro, nor in the process by which contracts were awarded to PPE Medpro.” They added that she did not accept that PPE Medpro was “referred in as alleged” or “that our clients misled anyone”.

The DHSC has stressed that ministers were not involved in decisions to award contracts, and that all company offers referred were subjected to a due diligence process. A government spokesperson said: “At the height of the pandemic there was a desperate need for PPE to protect health and social care staff and the government rightly took swift and decisive action to secure it. Ministers were not involved in awarding contracts.”

Lord Feldman said the companies were referred to him by third parties and he passed them on to officials. He was “neither responsible for nor played any part in the decision to award these contracts … never had any commercial relationship with them or their owners” and “did not request, or indeed know, that these offers has been assigned to the high-priority lane”.

The Cabinet Office said Lord Agnew had been referring on companies that had approached his office. Uniserve said the DHSC had approached it directly and that it had no connections with Agnew.

McVey and Lewis said the companies they referred were local to their constituencies. All other MPs and peers have been contacted for comment.
#Coronavirus  #Covid
Add Comment