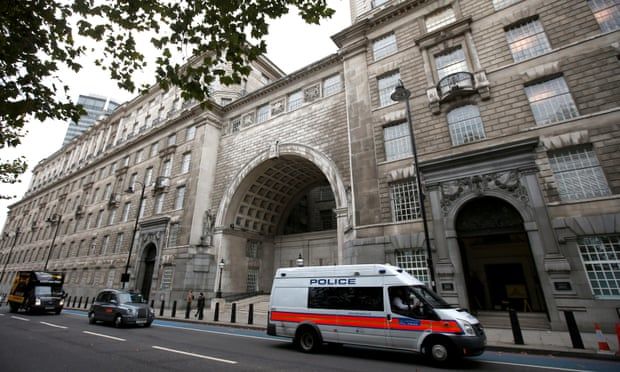 Committee says lack of resources affecting other areas of agency’s work and calls situation ‘untenable’
MI5 should be given increased funding to help tackle the rising threat of extreme-right terrorism, which now accounts for approaching a fifth of the spy agency’s investigations, a parliamentary watchdog has said.

MPs and peers on the intelligence and security committee said the agency had been forced to progress other work – almost certainly relating to Islamist terrorism – more slowly and had been unable to expand other activities as it had hoped.

“This situation is untenable,” the committee concluded in a report released on Wednesday. “MI5 must be given additional funding to enable it to conduct these cases without other areas of work suffering as a consequence.”

The domestic spy agency gradually took on responsibility for tackling extreme rightwing terrorism from 2018, after a review in the aftermath of the murder of the Labour MP Jo Cox in 2016. It rapidly became a significant area of work.

According to the committee report, in July 2020 a fifth of MI5’s investigations in Britain were devoted to extreme rightwing terrorism plus a lesser focus on leftwing, anarchist and single-issue terrorism.

Although the committee was careful to redact from the report which areas of MI5’s work were affected, it is likely to be in areas relating to Islamist terrorism, which shares many of the resources, staffing and techniques used to thwart extreme rightwing attacks.

The MI5 chief, Ken McCallum, told the committee that the agency did “not bid for additional people capacity” during the most recent spending review because he believed savings would accrue when a planned joint MI5 and police counter-terrorism operations centre comes into being.

The committee also said extreme rightwing groups were targeting military personnel as potential recruits, and said the armed forces provided no clear direction about which groups personnel could sign up to.

Policies that do not limit which organisations personnel can join are “somewhat risky”, the committee said, given the sensitive nature of the jobs carried out by service members and their access to weapons.

Members of the now-dismantled and banned extremist group National Action included a British soldier and Afghanistan veteran, the Finnish-born Mikko Vehvilainen, who was jailed in April 2018 for possession of a banned CS gas canister. Guns, knives and crossbow were also found at his home.

MI5 told the committee that “a significant percentage” of extreme rightwing terror suspects were under the age of under 24, and that the equivalent proportion in relation to Islamist terrorism was “much lower”.

But some of the most recent high-profile attacks were carried out by older men, such as the attack on worshippers at Finsbury Park mosque in 2017 in which one person was killed and 12 were wounded. The attacker, Darren Osborne, who was 47 at the time, was jailed for life.
#Afghanistan
Add Comment