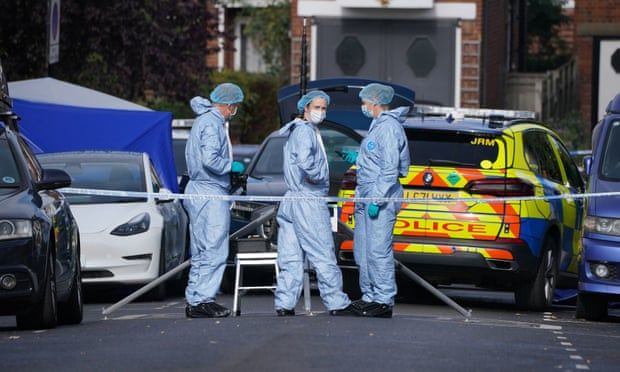 The incident occurred after armed hot-blooded officers were in pursuit of suspect vehicle in Lambeth.
An investigation has been launched after the ramming of a car during a police chase led to a man being shot dead in south London.

The man, named as Chris Kaba, a drill music artist, was being followed by armed officers from the Metropolitan police before the shooting in a residential street in Streatham on Monday night. Kaba’s car was boxed in by police vehicles, and locals told of hearing at least one gunshot.

At the scene in Kirkstall Gardens, a dark Audi was visible with a single bullet hole visible in the driver’s side of the front window.

The Independent Office for Police Conduct (IOPC), which is investigating, has not yet said whether a gun was found at the scene, with fingertip searches under way, or how many shots were fired or by whom.

Investigators were securing any available video from police body-worn cameras, and it is understood that officers involved in the incident are being treated as witnesses.

While independent investigations are mandatory when police open fire, there is no automatic assumption that police did anything wrong.

The Met said one of its officers opened fire with a police-issue weapon. “The vehicle was stopped following tactical contact in Kirkstall Gardens, Streatham Hill. A police firearm was discharged. An occupant of the suspect vehicle, a man believed to be aged in his 20s, sustained a gunshot injury,” the force said.

The authorities gave little detail about the shooting or events leading up to it, and people local to where the cars came to a halt gave their accounts of the drama.

The IOPC said: “At this early stage it is believed a man was fatally shot during the police response to reports of a suspect vehicle. We were notified by the MPS [Metropolitan police service] of the incident shortly after 11pm and we declared an independent investigation shortly before midnight.

“IOPC investigators were sent to the scene and the post-incident procedures to start gathering evidence. Our thoughts and sympathies are with all of those affected by this terrible incident.”

Police shootings in the capital risk straining community relations. The shooting happened in the borough of Lambeth, where confidence in the Met is low. According to a public survey by the mayor’s office for policing and crime, 40% of people in Lambeth think the Met do a good job in the local area, the second-lowest score of London’s 32 boroughs.

The figures have collapsed in the last five years: in March 2017, 67% of people in Lambeth said they thought police did a good job in the area.

Once the IOPC takes over the investigation, the Met is restricted in what it can say. “Inquiries into the exact circumstances are ongoing,” the force said.
Add Comment