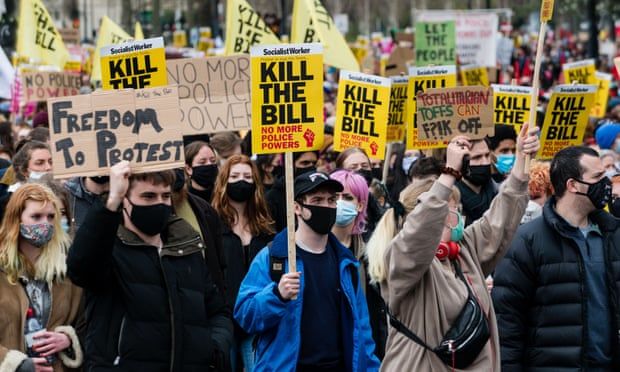 Civil liberties campaigners have criticised the Metropolitan police after two independent legal observers were among 107 people arrested following a march through central London on Saturday.

Protesters gathered on Saturday night in London, Bristol, Manchester and several other cities in opposition to a bill that critics say will limit the right to protest.

In London, thousands marched from Hyde Park to Parliament Square, where speeches were given against the police, crime, sentencing and courts bill, which passed its second reading in parliament last month.

Scuffles broke out between protesters and police. Most arrests were of protesters who had been kettled by the police near Aldwych in the early evening.

The two legal observers were from Black Protest Legal Support (BPLS), an organisation led by black and brown lawyers who provide free legal support to protesters.

The campaign group Liberty brought legal action against the Met after four legal observers from BPLS were arrested at a protest last month.

A spokesperson from BPLS described the latest arrests as concerning and egregious, saying the pair were wearing hi-vis bibs identifying them as legal observers and were complying with police instructions to move away from the kettle and maintain distancing when they were arrested. One was released from police custody at 2am on Sunday while the other was detained until 9am.

“We’re really concerned by the continued and systemic use of violence against protesters and independent legal observers”, the spokesperson said, adding that the arrest of observers undermined their ability to independently monitor the police’s conduct at protests and hold them to account.

BPLS said the pair fall under exemptions from Covid restrictions granted to volunteers.

Sam Grant, the head of policy and campaigns at Liberty, said arresting legal observers was “an intimidatory tactic to deter protest”.

He said: “Legal observers help to make sure protesters’ rights are respected and police act within the law. If officers believe they are acting lawfully, they should welcome this scrutiny.

“Continuing to arrest independent monitors is a scandalous attack on the right to protest and demonstrates exactly why people are taking to the streets against the government’s plans to give the police even more powers.”

The Met confirmed that a man and a woman acting as legal observers were arrested in The Strand. The force said both were arrested under health protection regulations and reported for consideration for a fine.

A spokesperson said the arrests of the 107 people in connection with the protest were for a range of alleged offences including breach of the peace, violent disorder, assault on police and breaches of Covid legislation. One woman was arrested on suspicion of possession of an offensive weapon.

Commander Ade Adelekan of the Met said the vast majority of those who attended adhered to social distancing rules but a small number were “intent on remaining to cause disruption to law-abiding Londoners”.

“Despite repeated instructions from officers to leave, they did not and, amid increasing levels of disorder, arrests were made,” Adelekan said.

In Bristol, which has become the focus of opposition to the government’s bill, police clashed with protesters for the fourth time in two weeks.

More than 1,000 protesters gathered in the city and at one point a group marched up the M32 motorway and brought traffic to a standstill by sitting down on the carriageways.

After numbers dwindled to about 100, Avon and Somerset police put in place a dispersal order and scores of officers were deployed to drive the remaining protesters out of the city centre. 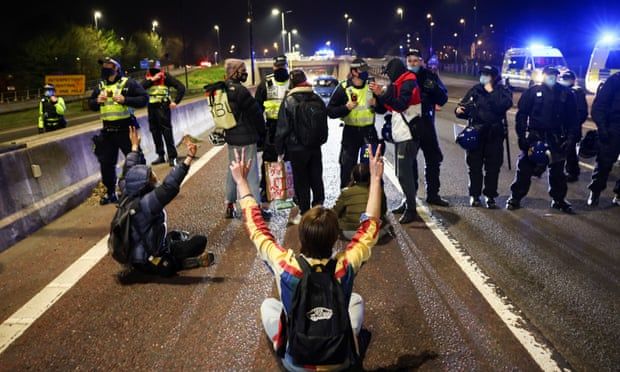 Police officers stand guard as demonstrators block the M32 motorway during a ‘kill the bill’ protest in Bristol.

Several who refused to leave were arrested, and officers with riot shields and dogs chased the rest into a park and away. Police said they made seven arrests.

There have been five demonstrations in the city, with only one passing peacefully. Protesters have criticised police for what they see as heavy-handed tactics.

Bristol’s area commander, Supt Mark Runacres, said: “Policing protests is always difficult in that we have to balance the rights of protesters with other members of the public. At times a relatively small group of people did cause significant disruption to motorists as they marched through Bristol and on to the motorway and I understand the frustration that would have caused.

“Our priority is always the safety of the public and, like all incidents, we evaluated every action the protesters took based on the threat, harm and risk they posed to themselves and to others. Dispersing protesters while they were on a live carriageway presented an unacceptable risk and the safest thing to do was to allow the protest to run its course.

“At around midnight there were several altercations between the small number of people who remained in the city centre. We never tolerate violence and so we made the decision to move people on. It’s disappointing that once again there were those who refused to listen to our requests to leave and that we had to make arrests.”

Around 200 people attended a march through Manchester city centre, which was broken up by police when a small group blocked the tram tracks in St Peter’s Square.