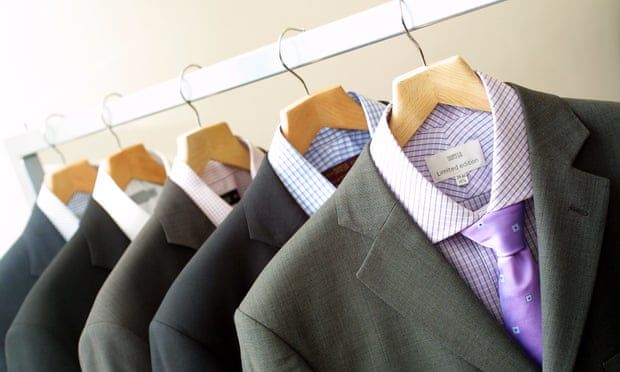 Doughnuts and coal also removed from list of 700 representative goods and services by ONS
The traditional men’s suit has been removed from the basket of goods used to calculate the annual inflation rate – the latest casualty of the increase in working from home since the start of the Covid pandemic two years ago.

The Office for National Statistics said the change in working patterns meant the suit was no longer one of the 700 representative goods and services selected to measure the UK’s cost of living.

Announcing details of this year’s changes, the ONS said a new men’s formal jacket or blazer item was being introduced to ensure men’s formal and business wear was still represented in the selection.

Other items that will no longer be tracked include doughnuts, which are being replaced by multipacks of cakes, and coal, which has been removed in anticipation of the government ban on domestic sales of the fuel from next year.

Other items added to the basket for the first time this year also reflected lifestyle changes since the start of the pandemic. These included antibacterial surface wipes, sports bras/crop tops and collars for dogs and cats.

The ONS said demand for antibacterial products was still high, and people had responded to the pandemic by exercising more and owning more pets.

Canned beans, chickpeas and lentils entered the basket for the first time alongside meat-free sausages, reflecting the growth in vegetarianism and veganism, driven by greater consciousness of health, animal welfare and environmental factors.

Inflation is at a 30-year-high of 5.5% but is expected to rise further in the coming months as rising energy costs bite.

Sam Beckett, the ONS head of economic statistics, said: “The 2022 basket of goods sees some really interesting changes, with the impact of the pandemic still evident in our shopping habits. With many people still working from home, demand for more formal clothing has continued to decrease. So, men’s suits disappear from the basket and are replaced with a formal jacket or blazer.

“Last year’s lockdown living saw an increase in the number of us working out and exercising. That has continued into 2022 with the addition of the sports bra into the basket reflecting greater spending on sports clothing.”

Responding to criticism from the food writer and campaigner Jack Monroe that the official inflation figure fails to reflect the true cost of living for poorer households, the ONS said it was launching a personal inflation calculator, which could be used to calculate an individual’s personal inflation experience based on their spending patterns.

Beckett said: “Today’s announcement is a key part of our long-term transformation of prices collection that is designed to keep the measurement of UK inflation as accurate and relevant as possible.”
#Covid
Add Comment