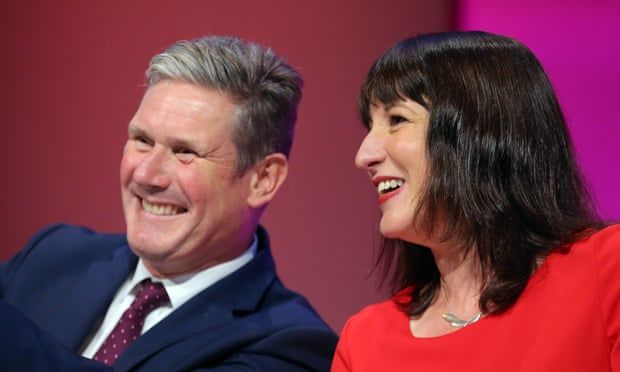 Analysis: Keir Starmer’s team regard departure as deliberate attempt to destabilise party leadership
After a rocky run-in to Labour’s conference in Brighton, Keir Starmer was hoping Monday would be the moment his party set internal divisions aside and turned to face the voters.

Chatting to journalists in the press room, he said his package of rule changes passed by delegates on Sunday would allow Labour MPs to focus on the public instead of looking over their shoulders at angry grassroots members.

He praised Rachel Reeves for her speech setting out her stall as Labour’s next chancellor: radical but responsible. Little more than an hour later, however, the show of unity was shattered when Andy McDonald, the last remaining Corbynite on Labour’s frontbench, abruptly resigned.

McDonald, who had been shadow secretary of state for workers’ rights, objected to being ordered by the leader’s office to oppose a union demand for Labour to back a £15-an-hour minimum wage.

In his resignation letter – distributed to journalists without warning and before he had spoken to Starmer – McDonald claimed the labour movement was “more divided than ever”.

Starmer’s team regarded his departure as a deliberate attempt to detract from Reeves’ speech and destabilise the leadership.

It is understood that Angela Rayner, who has worked closely with McDonald on workers’ rights, was not forewarned.

Rayner’s relationship with Starmer has come under close scrutiny after he distanced himself from her strongly worded remarks about Tory “scum” at the weekend, saying he would talk to her about them.

The pair have broadly patched up their differences since Starmer stripped Rayner of the jobs of party chair and elections coordinator in May’s reshuffle, but they have very different political and personal styles.

Starmer’s robust leadership style and tendency to take decisions with the advice of a tight inner circle can irk even close colleagues, some of whom were taken aback by his rule-change plan.

Ed Miliband found his approach to energy nationalisation undercut on Sunday when Starmer said Labour would not take the big six energy companies into public ownership.

That appeared to contradict recent remarks in which Miliband, the shadow energy secretary, had suggested public ownership was part of the solution to shifting the economy to green energy. Labour insiders said Miliband was frustrated by Starmer’s flat “no” when asked about nationalisation, with one party source suggesting the two men were barely speaking – though Miliband denies this.

While Starmer’s team were clearly shocked by McDonald’s resignation on Monday, they believe another row with the party’s left – over rejecting radical demands from trade unions – will not do his public reputation any harm.

However, there is also a fear that McDonald’s determination to air his concerns in public marks a new, more militant phase for the party’s left wing.

The Corbynite campaign group Momentum responded to Starmer’s rule change package last week by warning it would spark a “civil war”, claiming “conference will get very messy, very fast – and there is no saying who will come out on top”.

The former shadow chancellor John McDonnell wrote on Sunday that he could no longer behave as an “elder statesman”, and he has since begun criticising Starmer more directly, even suggesting that the Labour leader should consider his position if he has not improved the party’s poll ratings by January.

Jeremy Corbyn’s outriders believe they faced a deliberate programme of sabotage from centrist MPs in the parliamentary Labour party, and after Starmer took them on so publicly over leadership rules they now feel the gloves are off.

They may not have the 40 MPs necessary to muster a leadership challenge, but they may become increasingly noisy in the coming months just as Starmer hopes to show the public the Labour party is a government in waiting.
Add Comment