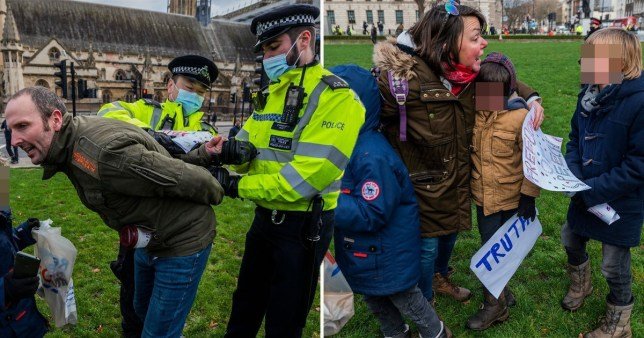 Maskless man 'arrested in front of children at anti-lockdown protest'

A maskless man was photographed being detained in front of his family today as anti-lockdown protests took place in central London despite police warnings.

The Met Police said 21 people were arrested at the demonstration at Parliament Square, which began at 12pm today. The protest was planned in response to further lockdown restrictions starting in England this week.

In photos from the scene, the man could be seen being confronted by the police while holding a brightly coloured freedom sign. He was then pictured being handcuffed in front of a young boy.

Another image then showed the boy and two other children being seemingly comforted by a woman as he was led away. The woman and children also held signs that read ‘freedom of speech’ and ‘truth’.

Bystanders said the protesters had claimed they were taking their daily exercise when they were stopped by police, and refused to move on. Exercising is one of the few exemptions that allows people to leave their homes under the current restrictions.

Gathering for the purpose of a protest is not an exemption under the rules, and people are also not allowed to meet up with more than one other person outside of their household at a time. 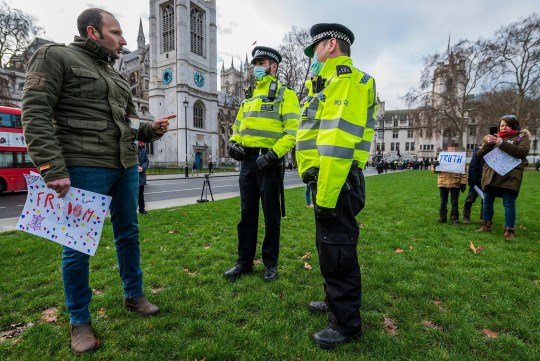 He refused to leave the area, after being asked to do so by the police 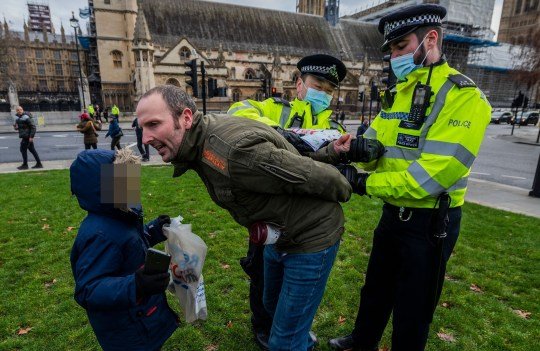 The protests took place despite warnings from the Met Police

Officers could be seen pinning some of protests to the ground and arresting them after they refused to go home. Other photos from the scene showed people being cuffed on the plinths of the famous Mahatma Gandhi statue and piled into waiting police vans.

The Met Police had previously urged people not to attend the protest, and threatened enforcement action for anyone who disobeyed the restrictions.

Deputy Assistant Commissioner Laurence Taylor said on Wednesday: ‘For those planning on demonstrating, you are reminded of your obligation to adhere to the Government guidelines and stay at home.

‘If people are found to be in breach of regulations, put in place to keep the public safe, then they can expect to see enforcement from officers. 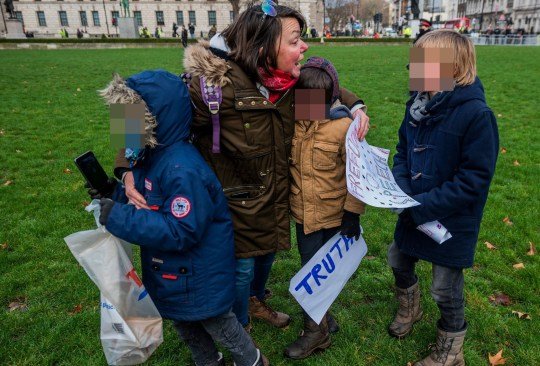 The children were comforted by a woman 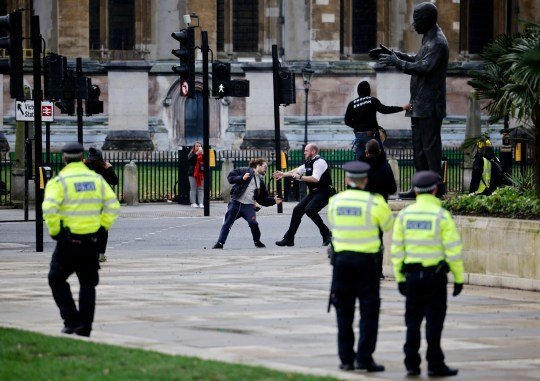 ‘This will not just be organisers of the gatherings but participants too – by now everyone knows their part to play in stopping the spread of the virus.

‘People that gather as part of this protest today risk the health of Londoners. I will not tolerate this and that is why we have a policing plan in place to disperse crowds and if necessary, take enforcement action.’