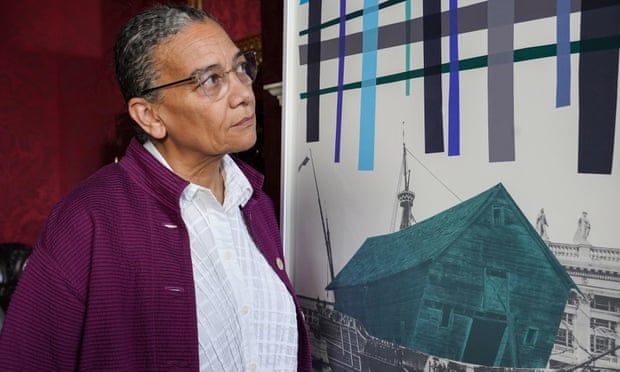 Lubaina Himid: Tories should not meddle with museum boards

Himid was at 11 Downing Street to be named as the latest artist to be commissioned by the Government Art Collection to make prints that will hang on the walls of British diplomatic buildings around the world.

It has been commissioned by a body that represents a government accused of interfering in the leadership of museums and galleries by blocking appointments of people who are not like-minded.

Sir Charles Dunstone, the founder of Carphone Warehouse, resigned as chair of Royal Museums Greenwich after the then culture secretary, Oliver Dowden, blocked the reappointment of Dr Aminul Hoque, an education academic whose work calls for decolonising the curriculum.

Mary Beard was also blocked from being on the board of the British Museum. She was later elected by trustees themselves.

Himid said museums and galleries needed to have more independence. “I think institutions are incredibly responsible actually and they run themselves incredibly carefully. I’ve sat on boards and from where I’m standing they are not hotbeds of radical thinking. They are respectable and respected and they should be allowed to think for themselves.”

Himid was asked where she stood on removing statues, an issue that hit the headlines in Britain when Black Lives Matter protesters toppled the statue of slave trade Edward Colston in Bristol last year.

“I have a difficult relationship with the toppling of statues,” she said. “First of all, I’m not a very violent person … but also it doesn’t leave much room for debate.

“This year it’s a colonial figure, next year it is somebody we care about now. I think it sets too dangerous a precedent.”

Himid was being named as the 2021 recipient of the Robson Orr TenTen award, an annual commission in which a British artist is asked to create a limited edition print that will hang in embassies. Previous recipients have been Hurvin Anderson (2018), Tacita Dean (2019) and Yinka Shonibare (2020).

Himid, a professor at the University of Central Lancashire in Preston, has been a respected, important figure in the British art scene for 40 years but it was winning the Turner prize in 2017 that brought her to a wider audience. A major exhibition of her work opens at Tate Modern in November.

She admitted some surprise at being commissioned by the government but added: “I seriously am interested in bringing sides together. If you looked at my work maybe 40 years ago, that would never have happened but I’ve become, I don’t know, softer and respectable.”

The print she has made for the Government Art Collection is, Himid said, “an attempt to hold back time and undo some tragic historical and global mistakes”.

Of course that cannot happen, she said. “We cannot undo the wrongs of enslavement or the legacies of colonialism. But we can all attempt to learn from the warnings.”

She hoped the work would “open up conversations” and encourage people to talk about issues more deeply. “That is always the way with my work, it is about opening up conversations. I’m not trying to change the world, art can’t do that, but it can open up debates and give people a way in to understanding.”

The announcement was originally meant to be made by Dowden until he was reshuffled to become the Tory party chair, replaced by Nadine Dorries.

Julia Lopez, a newly appointed minister of state at the Department for Digital, Culture, Media and Sport made the announcement instead. She said: “It’s wonderful that this new work will form a part of the Government Art Collection where it’s going to be enjoyed by people across the world and really play into our new secretary of state’s theme about accessibility.”
Add Comment