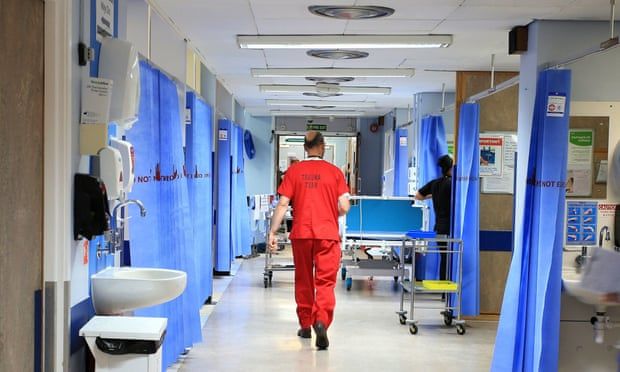 The Royal College of Emergency Medicine said the huge loss of beds since 2010-11 was causing “real patient harm” and a “serious patient safety crisis”. At least 13,000 more beds are urgently needed, it added, in order to tackle “unsafe” bed occupancy levels and “grim” waiting times for emergency care and handover delays outside hospitals.

There are currently 162,000 beds in the NHS across the UK, according to the college.

“The situation is dire and demands meaningful action,” said Dr Adrian Boyle, the college’s vice-president. “Since 2010-11 the NHS has lost 25,000 beds across the UK, as a result bed occupancy has risen, ambulance response times have risen, A&E waiting times have increased, cancelled elective care operations have increased.

“These numbers are grim,” Boyle added. “They should shock all health and political leaders. These numbers translate to real patient harm and a serious patient safety crisis. The health service is not functioning as it should and the UK government must take the steps to prevent further deterioration in performance and drive meaningful improvement, especially ahead of next winter.”

The college’s report said 13,000 staffed beds are required in the NHS across the UK to create “meaningful change and improvement”, which includes a “significant” improvement in A&E waiting times, ambulance response times, ambulance handover delays and a return to safe bed occupancy levels. It recommends opening at least 4,500 of these before winter.

The NHS Confederation said a fully funded long-term plan for the health and social care workforce was needed as well as immediately investing more cash in social care to make sure patients medically fit for discharge can be cared for in the community.

Rory Deighton, acute lead at the NHS Confederation, said: “This report lays bare the scale of the challenge the NHS is facing in terms of capacity and workforce. NHS leaders see first-hand that capacity in urgent and emergency care and ambulance services can simply not cope with the level of pressure we are seeing in the whole system.”

Andrew Goddard, the president of the Royal College of Physicians, said: “Even before the pandemic hospital beds were short, but Covid-19 has created its own extra demand for beds, claiming around 3,000 beds for almost a year now.

“We also desperately need additional beds in social care. Without these, hospitals will continue to be full, with knock-on effects in emergency departments and on ambulances. The fact is, it’s simply not possible to have more staffed beds without increasing the number of doctors, nurses and other clinicians available to care for the patients that need them.

Pat Cullen, the chief executive of the Royal College of Nursing, said the report spotlighted “a health service on its knees”, adding: “Hospitals are full to bursting, with patients in inappropriate locations all too often.”
#COVID-19  #Covid
Add Comment