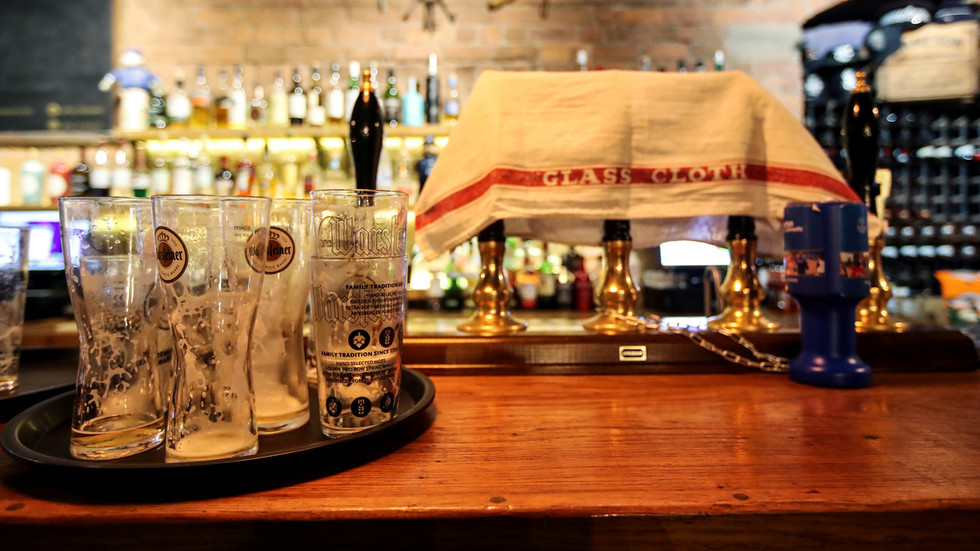 Beer sales in British pubs are the lowest in a century in 2020 due to the pandemic yet alcohol intake and related problems seem to be on the rise, the best way to curb these excesses... open the pubs.
It's Saturday, and I NEED a beer!

I don't mean pulling a crappy can of low-fat, alcohol-free ale from the fridge and sitting on the sofa in front of the TV. No. That lockdown lager sipping is simply not the same thing.

I mean I need a pint of beer. In a pub. Full fat and laced with alcohol as nature intended. From a tap. That pint glass filled by a smiling barmaid, preferably with absurdly oversized breasts. I want to stand at a bar with friends, people who feel free to tell dirty jokes and say things that are most definitely politically incorrect.

Football and politics in the mix too, maybe; blokes talking utter bollocks about Newcastle United, Chelsea, Man U, 4-4-2 and Boris bloody Johnson. Just normal working men and women letting off steam, laughing and shouting and decompressing. People who don't have a single second to waste on policing their language for fear of offending the perpetually offended.

Yes please, I'll even buy the first round!

Covid-19 is tearing at the very fabric of society, and one of the central threads that little sh*t of a virus is pulling on is; the trip down the pub. It's Saturday and... the pubs are closed. Well, you might be able to sit somewhere and have a pint with a meal sometime in the next few months, maybe. Again, though, that's simply not the same thing. It just isn't.

I guess you folks over on the wrong side of the Atlantic don't really connect with what I'm saying here, judging by the inevitable social media outrage over American football megastar Tom Brady getting a wee bit tipsy – give the dude a break, he just won the Super Bowl for the seventh time. At the age of 43! He's probably the healthiest middle aged man in the whole of the USA. But heck yeah, it would appear to be true, the bloke can't hold his beer.

People who don't habitually go down to their local pub or the working men's club for a pint with mates, they'll never get it. Maybe, when the pubs reopen, it's time for my fellow Brits to get back into the habit, do your duty – and sip a beer for Blighty. We've got to sink that backlog.

Billions of pounds worth of beer went down the drain in 2020, quite literally. Beer sales in British pubs halved to their lowest levels since the 1920s, down 56% to around £6 billion, a drop of almost £8 billion from 2019.

Yet it seems Brits have actually been drinking more than ever during the pandemic. At home.

Surely it's way more dangerous to get hammered alone on the sofa? You only have to reach for the fridge door, not your wallet to pay for your round. There is no bar maid or landlord raising their eyebrows at your all-too-frequent requests for 'the same again, love'. Good mates, too, will usually tell you when you've had enough.

People are also working from home as well as drinking at home, a fierce hangover is a lot easier to hide on a Zoom call than it is in a work meeting with real people in an actual room.

Around 6,000 venues with an alcohol license closed down last year, with community pubs and casual dining places hit hardest. Somewhere around 2,500 pubs called last orders, probably for the last time. Many of these were in country villages and small towns, where it was simply impossible for the landlords to weather the pandemic storm and cover their overheads.

That's pubs like The Gables, in Leyland, Lancashire. Regulars won't be back to prop up the bar because it's now boarded up after landlords Ruth Smith and Alan Chadwick told regulars they 'cannot see any possible recovery'.

As one regular wrote on the pub's Facebook page: "Alan and Ruth, I’m so very sorry for you both and for the whole Gables family. I counted myself very fortunate to have been welcomed as a regular feature in the Gables... I’ve missed you all this year and I’m so saddened by this announcement. Thank you for making me feel like part of the family."

More pubs are sure to go under, as cash reserves run out and they fail to generate enough income.

Pubs were already being smothered and sanitized though, long before the pandemic hit. A boarded up local has long been a common sight on Britain's streets. Around a quarter of pubs have closed in the past 20 years.

Killed off by lack of interest, cheap supermarket beer, the terrible business acumen of landlords, sticky carpets and awful decor, disgusting toilets, smoking bans, social media and, of course, the taxman – somewhere around 60p a pint goes straight into the Chancellor's trousers.

Then there's also the dreaded pub chains. No doubt some of those shuttered local boozers will reopen as yet another Wetherspoons, the pub version of a McDonalds.

They all have the same faux paintings on the walls and the same fake olde English feel, the same menu of meals microwaved out the back. And then there's the plastic Irish bars... the first bar to open on Mars is sure to be called O'Neill's, Flaherty's or Paddy Malone's.

Maybe that beer on the sofa isn't so bad, after all. What's on the telly?
#COVID-19  #Covid  #Facebook
Add Comment