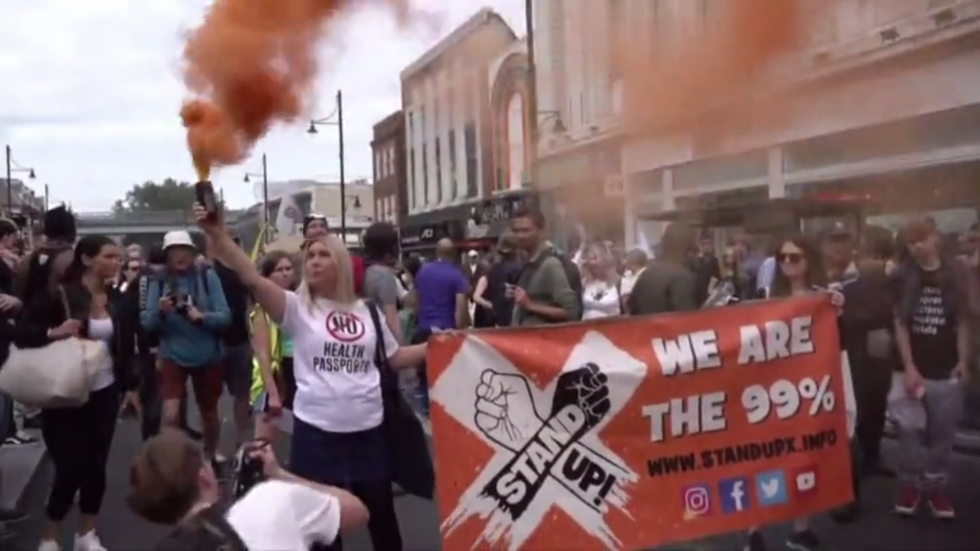 Protesters have packed into central London in a demonstration against the government’s ongoing plans to introduce so-called vaccine passports. Though largely ignored by the media, “thousands” of people reportedly took part.

The protest march kicked off at Hyde Park on Saturday afternoon and set off across Vauxhall Bridge and toward Clapham Common. London’s Metropolitan Police reported road blockages and bus delays along the route, and officers remained in close proximity to the marchers at all times.

Video footage showed a dense crowd of people in attendance. Some waved religious banners, some held placards opposing vaccination full stop, and others demanded the government drop its plans to require patrons of certain venues be vaccinated against Covid-19.

No official crowd size estimate is available, but protesters posting on social media claimed “it looks like thousands” took part. As of later on Saturday afternoon, no mainstream British news outlets had reported on the protest. Taking place simultaneously was a rally by climate change group Extinction Rebellion, who have staged a week of straight demonstrations in the city, grabbing newspaper headlines every day.

The anti-vaccine passports rally was not a once-off event either, and similar rallies have taken place throughout the summer.

As the British government’s plan currently stands, proof of vaccination will be required to enter nightclubs and other venues “where large crowds gather” as of next month, with the NHS’ Covid Pass mobile app likely to be used as proof. However, there is still some confusion as to how the system will be implemented. Industry spokespeople told the Guardian this week that they have not received any advice from the government on the system, and a leaked letter from Health Secretary Sajid Javid’s office last weekend stated that “no final policy decision has yet been taken" on the issue.

Meanwhile, though nearly 80% of Britons have been fully vaccinated against Covid-19, new cases are still rising, with an average of more than 33,000 cases reported each day over the last week, per NHS data. By contrast, daily cases in late April and early May were below 2,000 each day.