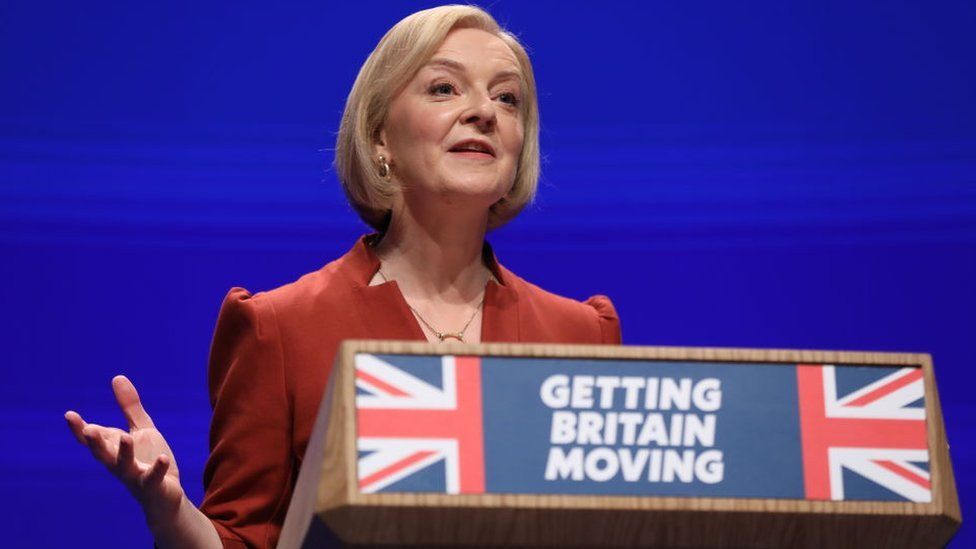 In her speech to the Tory conference, which has been marked by U-turns and internal division, the PM admitted her policies would cause "disruption".

But she said "the status quo is not an option" and "we must stay the course".

The speech came against a backdrop of financial and political turmoil following the government's mini-budget.

Markets reacted badly to the plans for £45bn in tax cuts funded by borrowing, while the government's U-turn on its plan to scrap the 45p tax band for the highest earners was fuelled by opposition from Tory MPs.

The prime minister's speech lasted around 35 minutes - shorter than is usually the case for the party leader at conference - and was briefly interrupted by environmental protesters from Greenpeace, holding up a sign reading "who voted for this?".

Ms Truss - who became PM just one month ago - made no new policy announcements but pledged to stick to her promises to cut taxes and regulations on businesses.

She acknowledged "these are stormy days", citing the global economic crisis caused by the pandemic and the war in Ukraine.

But she added: "I'm determined to get Britain moving, to get us through the tempest and to put us on a stronger footing as a nation."

Ms Truss also vowed to take on the "anti-growth coalition" and "enemies of enterprise", including opposition parties, "militant unions" and environmental campaigners - like the ones, she said, who heckled during her speech.

The prime minister mentioned growth 29 times in her speech, recognising that her goal was "difficult but necessary".

She argued cutting taxes was "the right thing to do morally and economically" as it allowed people to keep more of their own money so they are "inspired to do more of what they do best".

"I believe that you know best how to spend your own money, to get on in life and realise your own ambitions," she said, adding: "I want what you want."

However, in attempt to reassure the markets, she promised to "keep an iron grip on the nation's finances".

Highlighting her own background, Ms Truss said her upbringing in Paisley and Leeds in the 1980s and 1990s meant she knew what it was like "to live somewhere that isn't feeling the benefits of economic growth".

"I have fought to get where I am today," she told the conference, highlighting how the barriers she had faced as a woman "made me angry and it made me determined".

Echoing her predecessor Boris Johnson's pledge when he became prime minister, she promised to "level up" the country "in a Conservative way, ensuring everyone everywhere can get on".

The hall was not packed, but reaction during the speech was positive, and included several standing ovations.

Tory delegates leaving the conference hall echoed this, with one member saying: "She has steel and you need that when you are a woman in politics."

Cabinet ministers seated on the front row for the speech applauded as Ms Truss outlined her priorities. Afterwards Welsh Secretary Sir Robert Buckland was one who praised the leader's message, adding that her speech was "packed full of substance".

Chief executive Ryan Shorthouse said her economic policies "do very little" for voters who backed the Conservatives in 2019 and "have for a long time felt forgotten".

There was a muted reaction from the financial markets, with the pound falling slightly against the dollar during Ms Truss's speech.

Government borrowing costs also fell but were slightly higher over the day.

The Tory conference has been overshadowed by divisions, after the government made a dramatic U-turn over its plans to scrap the top rate of income tax.

Some cabinet ministers and senior Conservatives have also publicly spoken out against the suggestion increases to some benefits like universal credit could be linked to wages rather than prices, which would amount to a real-terms cut.

Conservative MPs have been told they face suspension from the party - known as losing the whip - if they vote against Ms Truss's tax cuts in Parliament.

Levelling Up Minister Paul Scully told the BBC it would be a "very serious situation" for the government if its mini-budget did not get through and urged Tory colleagues to "think of that before they think about rebelling".

Labour's shadow chancellor Rachel Reeves said Ms Truss had been "at the heart of building a Conservative economy that has led to the flat wages and low growth she highlighted today".

How did Liz Truss's conference speech go down?