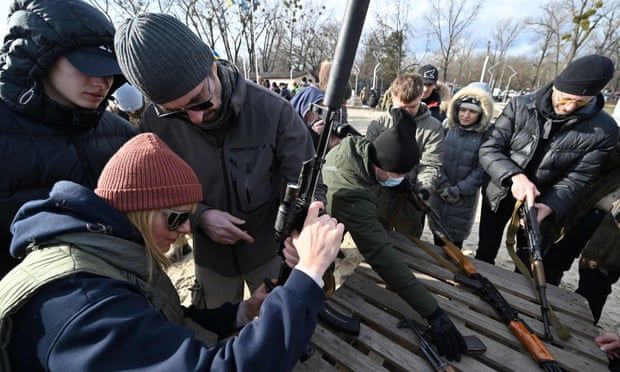 Present and former Conservatives warn that anyone volunteering for combat in embattled country will be breaking the law
Liz Truss has been criticised for saying she would back Britons going to Ukraine to join the fight against the Russians, with Conservative colleagues saying this would be reckless and illegal.

In an interview on BBC One’s Sunday Morning programme, the UK foreign secretary replied “absolutely” when asked whether she would back anyone wanting to volunteer to help the Ukrainians fighting for their freedom.

She told the programme: “That is something people can make their own decisions about. The people of Ukraine are fighting for freedom and democracy, not just for Ukraine, but for the whole of Europe. Absolutely, if people want to support that struggle, I would support them in doing that.”

Her comments appeared to run counter to advice on her department’s own website, which says those who travel to eastern Ukraine to “fight, or assist others engaged in the conflict” could be prosecuted on their return to the UK.

Until now there has been almost no evidence of foreigners going to Ukraine to join the battle against the Russian invasion. But on Sunday, the Ukrainian president, Volodymyr Zelenskiy, said he would be setting up an international legion for volunteers.

Dominic Grieve, who was attorney general when David Cameron was prime minister, said that anyone going to fight in Ukraine would be in breach of a law passed in 1870 saying is illegal to enlist in a foreign army at war with a country at peace with the UK.

“The comments of the foreign secretary may be entirely honourable and understandable, but unless the UK government gives formal licence to people to go to Ukraine, they would be in breach of the Foreign Enlistment Act and committing a criminal offence,” said Grieve, who left the Conservative party over Brexit.

When Grieve was attorney general, the government had to deal with the problem of Britons going to Syria to fight both for and against Islamic State. At the time the CPS warned that even people wanting to fight against the Syrian dictator Bashar al-Assad would be in breach of terror laws that make it an offence to use violence against a government.

Tobias Ellwood, a former soldier who now chairs the Commons defence committee, said he hoped Truss was caught off guard when she made her comments, which she repeated in at least three morning interviews, and that she would retract them.

“It is not a responsible policy for Britain to be pursuing in sending untrained civilians into harm’s way, especially as we’ve made the decision to hold back Nato forces,” the former defence minister said.

“I really hope we never find ourselves in the position where a mum or dad is having to be consoled because some untrained youngster, with no military experience, has answered this call. We need to be careful.

“The irony is that we have one of the most professional armed forces in the world, and yet we seem to be encouraging those without any training – or indeed any equipment – to head to Ukraine. This needs a rethink.” Terror legislation might not apply in Ukraine, where volunteers would be fighting to defend the government, not overthrow it, but the Foreign Enlistment Act would theoretically still apply unless the government were to use an order in council, a privy council regulation, providing a legal exemption.

However, Sir Bob Neill, the Conservative MP and chair of the Commons justice committee, said the Foreign Enlistment Act had not been used since 1896 and had been described by the judicial committee of the privy council as an “antiquated piece of legislation”. Neill said that “what’s good enough for fighting Franco is good enough for fighting Putin”.

Zelenskiy’s call for people to join his country’s international legion seems to be modelled on the international brigades formed in the 1930s to enable foreign volunteers to travel to Spain to support the anti-fascist forces in the civil war. About 4,000 Britons volunteered, including the novelist George Orwell.

At the time Britons fighting in Spain were also told that they risked prosecution under the Foreign Enlistment Act. But in the event prosecuting people for fighting fascism was deemed unrealistic, and the act was never used.
Add Comment