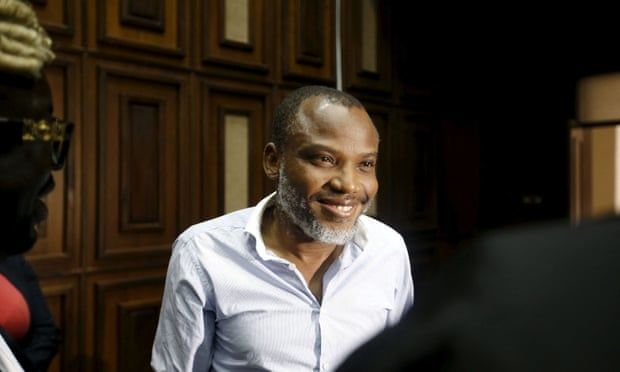 Family of Nnamdi Kanu, a separatist leader, say he was seized and tortured in Kenya and then flown to Nigeria
The family of a British citizen have accused the foreign secretary of ignoring “overwhelming evidence” he was taken to Nigeria in an act of extraordinary rendition and failing to end his “unlawful” imprisonment there.

Nnamdi Kanu, the leader of the Indigenous People of Biafra (Ipob), a prominent separatist movement proscribed in Nigeria, has been held there since June last year.

The Nigerian government has previously said he was extradited to the country’s capital city, Abuja, with assistance from Interpol but his family claim the father of two was seized and tortured in Kenya before being flown to Nigeria.

In a pre-action legal letter to the foreign secretary, Liz Truss, the family’s lawyers, Bindmans LLP, say there is “overwhelming evidence” that he was subjected to extraordinary rendition.

It cites testimony Kanu has given to his lawyers and brother, an expert report, which has identified the flight they believe he was unlawfully transported on, and the Nigerian government’s failure to provide details as to how Kanu – who did not have his British passport with him – came to be there.

Bindmans, which has previously threatened legal action over lack of consular assistance for Kanu, says Truss must take a view on whether there has been a breach of international law or face a court challenge.

“If Mr Kanu has been subject to extraordinary rendition, this is a grave breach of international law which has a significant impact on the discretion which the secretary of state exercises in respect of the steps she should take to assist Mr Kanu under international and domestic law,” wrote Bindmans solicitor Shirin Marker.

“Forming a view as to whether a breach of international law has occurred, and if so the gravity of the breach, is therefore an essential prerequisite to the exercise of discretion on taking further steps at international and domestic law.”

The letter says Kanu was in Kenya in June last year when he was detained by the country’s security services, who took him to a house where he was chained to the floor and beaten for approximately eight days. He was put on a private jet on 27 June and flown to Abuja, it continues.

His brother, Kingsley Kanu, said: “With every day that passes, I am increasingly concerned for my brother’s welfare in detention and increasingly frustrated by the UK government’s ineffectiveness in assisting him. I hope the court will rule the foreign secretary must recognise the seriousness of my brother’s situation and properly consider what other steps she can take to assist him in light of his extraordinary rendition.”

Kanu was arrested in Nigeria in 2015 and charged with terrorism offences and incitement, after airing broadcasts on a digital radio station, Radio Biafra, which he founded at his home in London. Two years later he was released on bail and fled the country after an attack on his family home, which he claimed killed 28 members of Ipob. In January, he pleaded not guilty to charges of terrorism.