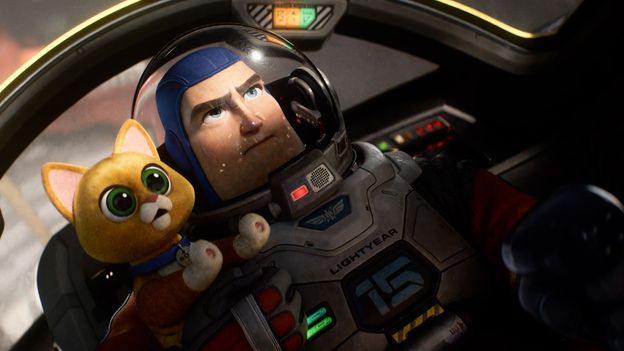 The latest entry in the Toy Story cinematic universe is "thin and repetitive", with a "sloppy screenplay", writes Nicholas Barber.

This postmodern premise raises some distracting questions, the first one being: does Lightyear seem like a film that might have come out in 1995? Does it have much in common with Jurassic Park, Men in Black, Independence Day, and the other science-fiction hits of the mid-1990s? The answer is no. The film's clunky machinery and scratched paintwork look as if they come from the 1970s rather than the 1990s, but features progressive attitudes which belong firmly to the 21st Century.

If we shrug all that off, and accept that the director, Angus MacLane, didn't fancy making a pastiche of a 1990s sci-fi movie, we have to move onto the next, more significant question raised by that opening caption: is Lightyear the kind of film which would get Andy begging for a Buzz Lightyear toy for his sixth birthday? Again, the answer is a big fat no.

If Lightyear had been a rollicking, Flash Gordon-style yarn about a Space Ranger zooming around the galaxy and zapping evil aliens, you could see why it might be Andy's "favourite movie". But MacLane has made a frustratingly slow, melancholy drama with a gloomy, grey setting, drab, uninspired production design, and a depressing story that's hardly livened up by the forced banter or the predictable pratfalls. Worst of all, its doubt-racked main character is a lot less endearing than the swaggering lunk we know and love from Toy Story.

Lightyear doesn't even establish who Buzz is or what he does, but he and his Space Ranger sidekick Alisha (Uzo Aduba) seem to be some sort of security guards who work on some sort of colony ship. They touch down on a planet where they are attacked by the local flora and fauna, but these potentially entertaining giant bugs and tentacle-like tendrils are written out immediately afterwards. Buzz tries to save the colonists by piloting the ship off-planet, but, through no fault of his own, the ship collides with a mountain top and its "hyper-speed crystal" is shattered. Buzz and the colonists are stranded. This leads to lots of scenes in which he feels guilty about making a disastrous "mistake", even though he didn't actually make a mistake. It also leads to lots of scenes in which he tests a succession of replacement crystals in his personal shuttle craft. Again and again, the crystal fails to make the grade, but Space Rangers always finish their missions – as we are told approximately 87 times – so after every failure, Buzz flies off to try out another makeshift crystal.

The story is thin, repetitive, and almost entirely dependent on the heroes being clumsy

After what seems like hours, he returns from one of his test flights to find that the colonists' ship has been besieged by the robotic stormtroopers of the Darth Vader-like Emperor Zurg (voiced by James Brolin). He meets a tediously zany band of clueless rebel soldiers (voiced by Taika Waititi, Keke Palmer and Dale Soules), and together they plan to fly up to Zurg's hovering mothership. But then Buzz's shuttle craft is damaged, too, and he has to locate another crucial component to fix it. At this point, the viewer will come to the stomach-sinking realisation that Lightyear has two plots – and they're both about the hero getting hold of a spare engine part. To use that mundane plot once, as Star Wars: The Phantom Menace did, may be regarded as a misfortune; to use it twice looks like carelessness.

Bear in mind that this is a Pixar film, so of course the animation is hard to fault, and of course it has some ambitious philosophical concepts. But considering how proud the studio is of its engaging characters and machine-tooled storytelling, it's amazing that Lightyear has such an obviously sloppy screenplay. The story is thin, repetitive, and almost entirely dependent on the heroes being clumsy. (The closing credits are excruciatingly slow, a sure sign that the producers wanted the film to appear longer than it is.) And the characterisation is weirdly vague, as if the writers meant to fill in the gaps later, but never got around to it. There is a grand total of three interchangeable, annoyingly unhelpful robots. Zurg is hidden away until the last reel. His faceless minions are, well, faceless minions. And we hardly glimpse the lives of the colonists, so we have no investment in what Buzz and his bumbling friends are hoping to achieve.

What we're left with is a few neurotic misfits pottering around a barren desert, making a hash of things. They learn about the value of teamwork over and over again, and then they learn that family life is an adventure in itself, a lesson which was a lot more moving when it was taught in Pixar's Up back in 2009. Is this dreary ordeal really what anyone had in mind when they first heard the phrase "To infinity – and beyond"? Whatever escapades young Andy imagined in 1995 when he was playing with his Space Ranger toy, they were bound to be more fun than this one.