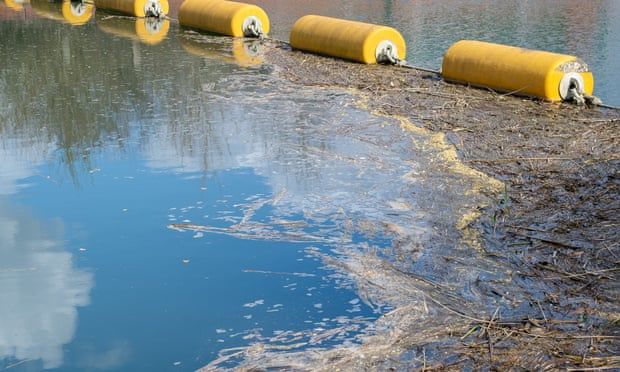 The party hopes to win over Tory voters at the local election disgusted with inaction over sewage dumping in rivers
Sewage has become a major battleground in the local elections in so-called “blue wall” seats, where the Liberal Democrats are challenging the Conservatives, from Guildford to Cambridgeshire.

The Lib Dems have put eliminating sewage dumps at the heart of their campaign, with the party leader, Ed Davey, planning to launch their fight at the River Wandle in Wimbledon on Wednesday. He is calling for a tax on sewage companies to fund the clean up of local rivers, which can see waste pumped out into the environment when there is heavy rainfall.

The Tories have been under huge public pressure over the issue since the government rejected a House of Lords amendment to put a legal duty on water companies to phase out pumping waste into rivers last autumn.

However, in a sign of how contested the issue has become, some Tory election material on social media has misleadingly accused the Lib Dems of “voting against a legal duty to clean up rivers”. Lib Dem MPs opposed the government’s plans in favour of stronger legal duties backed by opposition parties.

The Lib Dems said internal polling commissioned by the party suggests that sewage dumping is one of the top issues likely to persuade traditional Conservative voters to no longer vote for the party.

Another poll for the party showed that 36% of UK voters said they would be less likely to vote for an MP who did not support a ban on raw sewage dumped in rivers, rising to 41% of those who voted Conservative in 2019.

Launching the campaign, Davey said: “Conservative MPs have voted time after time to let water companies keep on pumping their filthy sewage straight into our rivers. Rivers like the Wandle in Wimbledon, which now has the worst ecological rating possible. Meanwhile, water company bosses are pocketing millions of pounds in bonuses. All that must change.

“Every vote for the Liberal Democrats counts. It sends a message to the Conservatives that they can’t keep failing our NHS. They can’t keep hitting families with unfair tax rises and they can’t keep pumping sewage into our rivers.”

A Conservative spokesperson disputed the Lib Dem claims about sewage and repeated their claim that the Lib Dems had voted against government measures to clamp down on sewage discharges.

“Lib Dem claims about sewage are even less trustworthy than the bar charts on their leaflets,” the spokesperson said. “While we are taking practical steps to tackle the problem, Lib Dem plans would not have stopped sewage discharges and could cost every household more than £25,000.”

In fact, opposition parties, including Labour and the Lib Dems, voted for a House of Lords amendment to the environment bill last October that would have placed a legal duty on water companies not to pump raw waste into rivers, which was voted down by Tory MPs. It would have introduced a requirement for sewage companies to “take all reasonable steps to ensure untreated sewage is not discharged from storm overflows” and to “demonstrate improvements in the sewerage systems”.

The government argued that its own version of the amendment was strong enough, with a promise to reduce the number of “storm overflow discharges”, and won22 Tory would-be rebels. Ministers said their plan “represents a major improvement on the status quo” and argued that “complete elimination of sewage discharges through storm overflows in England, which many are calling for more broadly, is likely to cost between approximately £350bn and £600bn”.

In 2020, water companies released raw sewage into rivers more than 400,000 times over a total of 3.1m hours. The release of raw sewage via storm overflows is legal in exceptional circumstances such as extreme rain, but figures show that in many cases such discharges are happening more routinely.
Add Comment