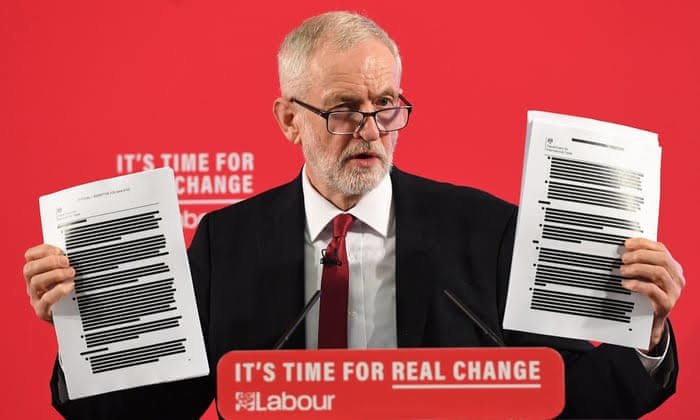 Boris Johnson’s claim that healthcare is “not on the table” in UK and US trade talks has been undermined by the release of official papers that reveal the two countries have repeatedly discussed dismantling protections that keep NHS drug prices down.

The 451 pages of uncensored documents show that between July 2017 and July 2019, senior UK and US trade officials discussed the NHS, drug patents, the pharmaceutical industry, health insurance and medical devices as part of the post-Brexit trade deal.

Experts have warned the documents show the US wants the UK to rip up the way it sets drug prices – potentially leading to billions of pounds a year in added costs for the NHS.

The record of the high-level talks, released on Wednesday by the Labour party, reveals that the US prefers a hard or no-deal Brexit scenario, and that American officials suggested that progressing free-trade talks between the nations could aid Donald Trump in his bid for presidential re-election in 2020.

That the NHS is up for sale and UK pharmaceutical markets are on the table has been a key attack line for Jeremy Corbyn and Labour throughout the UK election campaign – a claim Johnson vigorously denies. Johnson, campaigning in Cornwall, described the Labour claims as “total nonsense”

“The NHS is not on the table in any way,” Johnson insisted.

But Dr Andrew Hill, a drug pricing expert at Liverpool University and an adviser to the World Health Organization, told the Guardian: “There’s no reference in these documents to show that NHS drug prices are off the table. That matters because if they are on the table then there’s a potential for huge drug price rises.

“The documents show that the Americans want sweeping changes to Britain’s way of controlling drug prices and could potentially lead to billions of pounds a year in extra costs for the NHS.”

Corbyn, seeking to move on from criticism of Labour’s record on antisemitism and a bruising BBC interview with Andrew Neil, claimed discussions had already been concluded between the two sides on lengthening patents.

“Longer patents can only mean one thing: more expensive drugs. Lives will be put at risk as a result of this,” said Corbyn. He used the example of Humira, a brand name for the drug adalimumab, used to treat Crohn’s disease and rheumatoid arthritis, which he said costs the NHS £1,409 a packet, compared with £8,115 in the US.

Although not listed as one of the attendants to a specific July 2017 meeting outlined in the documents, Liam Fox, then international trade secretary, was in Washington DC on the same trade mission.

Ahead of the trip, Fox argued that commercial ties between the two nations could be worth an additional £40bn in the decade after Brexit if both sides remove existing obstacles.

He told journalists that an internal analysis by his department had showed that bilateral US-UK trade could rise from £167bn a year to about £207bn by 2030 “if we’re able to remove the barriers to trade that we have”.

The documents released on Wednesday show that the talks progressed and in November 2017, a negotiator remarked that a “limited discussion” on pharmaceuticals had been held, and added: “The impact of some patent issues raised on NHS access to generic drugs (ie cheaper drugs) will be a key consideration going forward.”

The momentum behind healthcare talks increased in March 2018 with the UK team stating that: “We should be aiming to engage in more in-depth discussion on how the UK system works eg on pharmaceutical protections as a means of positioning ourselves in relation to future US asks.”

The documents show that in the same month, the US elaborated on its desire to work with the “negative listing” approach, which officials said “makes total market access the baseline assumption of the trade negotiations”.

US trade officials asked about the UK’s state-owned enterprises, among which the NHS is included, and whether the UK had “concerns about their health insurance system”.

UK negotiators concluded that “the query about ‘health insurance’ was likely a fishing expedition to check the tone of our response”. They added: “We do not currently believe the US has a major offensive interest in this space”.

The notes reveal, however, that in July 2018 a detailed discussion was held on the UK pharmaceutical industry and structures in place in the UK that have a significant bearing on pricing.

In the talks the US “pushed hard” on grace periods, patent term extension and adjustment – all mechanisms that maximise drug company profits.

In the most recent document, dated July of this year, a senior UK official responsible for negotiations with the US stated that the Americans were clear “there would be all to play for in a No Deal situation but UK commitment to the Customs Union and Single Market would make a UK-US FTA a non-starter”.

Hill said the documents showed that that the US wanted to “dramatically change the way that the UK sets drug prices”.

“This could involve stopping the National Institute of Health and Care Excellence (Nice) from setting drug prices, having longer patents on drugs, which would limit the NHS’s ability to buy cheaper generic medicines, and letting US drug companies sue the NHS if they don’t get their way,” he said.

“These are very far-reaching demands. They just want to raise drug prices. They want drugs used in Britain to cost much more.”

Hill said the UK had some of the lowest drug prices in Europe but accepting US drug prices for the country’s top 20 drugs alone would cost the NHS an extra £12bn a year on top of the £18bn it already spends on medicines.

Hill warned that if Britain agreed to US demands to sweep away most of the UK’s current system of regulating drug prices, costs could spiral, just as they did in the US after the American government in the mid-1990s changed the law to stop Medicare and Medicaid – the country’s two bulk buyers of medicines – from negotiating drug prices. Drugs then had cost roughly the same on both sides of the Atlantic but today their cost is on average two and a half times higher in the US, figures from the OECD show.

At a press conference in London, in which NHS doctors and nurses dressed in full scrubs handed out the papers to journalists, Corbyn said: “We have now got evidence that under Boris Johnson the NHS is on the table and will be up for sale. He tried to cover it up in a secret agenda and today it has been exposed.”

Responding to the release of the documents, the international trade secretary, Liz Truss, suggested the move was designed to distract voters from the criticism Corbyn was facing over his dealing with antisemitism within Labour, as well as his position on Brexit.

“People should not believe a word that he says – this stunt is simply a smokescreen for the fact that he has no plan for Brexit and that he has been forced to admit that he wants to increase taxes for millions of families,” Truss said.