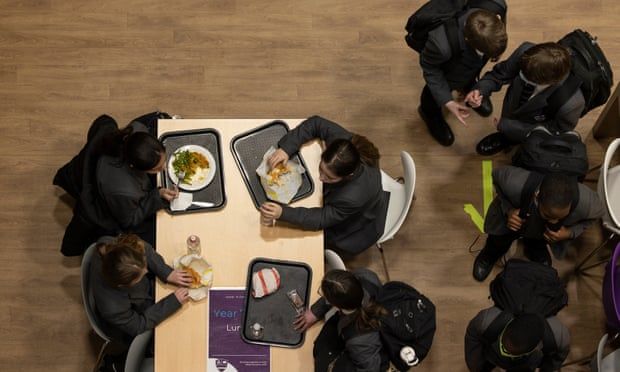 They say that with children being fed microwaved and cold meals by schools struggling with the cost of living crisis, a stronger response is needed.

A leaked copy of the strategy, seen by the Guardian, shows limited ambition to tackle child food poverty and obesity, with few new announcements.

The white paper refers to a £5m fund for a “school cooking revolution”, but this amounts to about £250 for each state school to teach pupils how to cook healthy food.

This has disappointed campaigners, who hoped the reviews by Henry Dimbleby in 2020 and last year, which recommended an expansion of free school meals and nutrition standards for food in schools, would be taken on board.

Instead, the government has made a vague commitment to keep eligibility for free school meals under review.

Rob Percival, the head of food policy at the Soil Association, said: “The most disappointing part of the white paper is the failure to extend the entitlement for free school meals.

“We are approaching 1 million children in poverty that don’t get free school meals. There are gaping holes in the nutrition safety net and vulnerable children are falling through.

“At the moment there are mandatory food nutrition standards for both schools and hospitals but there is no monitoring of compliance. We estimate 60% of secondary schools are failing to deliver the nutritional standards that children deserve.

The government’s strategy also puts heavy emphasis on individual responsibility when it comes to obesity, despite acknowledging that 64% of adults and 40% of children are overweight.

Dimbleby recommended taxes on sugar and salt, which would be used to fund healthy food for those in poverty, but there was nothing so ambitious in the leaked version of the strategy, which is expected to be published on Monday.

Rightwing thinktanks celebrated the lack of sugar or salt tax.

Christopher Snowdon, that head of lifestyle economics at the Institute of Economic Affairs, said Dimbleby had been “taken in by activists” and had “come up with mad policies”.

He urged the government: “Stop asking people to do pointless reviews and come up with policies yourself! These are unforced errors and totally avoidable headaches.”

Maxwell Marlow, a research and development officer for the Adam Smith Institute, said: “The government is right to shelve its proposed salt and sugar taxes. With 80% of people stating that they are struggling to make ends meet, purposefully pushing up prices on food and limiting the choices available to families will lead to more hunger and stress at a time of historic crisis.

“Moreover, as we’ve seen with other sugar taxes in the past, they often don’t have the desired effect, with consumers substituting it for something else or simply consuming more. Shrinkflation [in which products decrease in size but the price remains the same] caused by additional levies will lead to greater multipack sales, and on to more sugar being consumed.