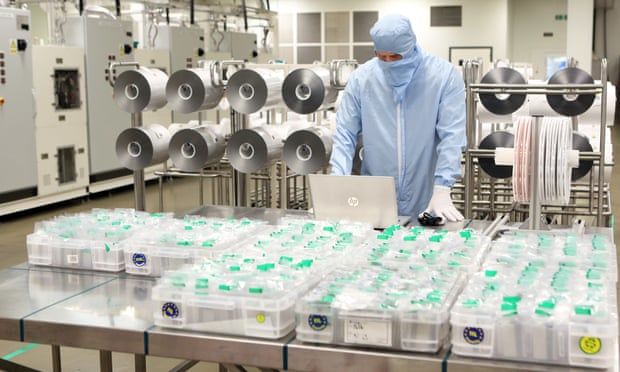 Party makes promise amid reports UK is falling behind European rivals in production capacity for EVs
Labour has pledged to create at least 30,000 jobs by promising to build three gigafactories for electric car battery production in Britain by 2025, as it warned the country was falling behind its European competitors in the race to ditch petrol power.

Amid recent reports that Britain faces a battle to hold on to the production of electric vehicles (EVs) made by manufacturers already in the UK, the party has committed itself to a major expansion of the part-financing of gigafactories. It follows research suggesting countries such as Germany, which already has a huge car industry, are significantly ahead in establishing the plants.

Research from the independent Faraday Institution suggests Germany will have 150,000 more electric vehicle jobs than the UK by 2030, France will have 20,000 more and Hungary 30,000 more in battery manufacturing and the supply chain.

It comes after the independent Climate Change Committee, which advises the government in its progress towards reducing UK carbon emissions, warned last week that unless battery gigafactories were located in the UK “it is unlikely that vehicle manufacturers will manufacture EVs in the UK”.

It added: “This means that the UK will have little control over lifecycle, imported and embedded emissions in battery and EV manufacturing. It would also be detrimental to the job opportunities available to UK workers.”

Labour said its estimate of 30,000 extra jobs from the gigafactories was based on a calculation by the Faraday Institution, which found that each GWh produced by a gigafactory would support 500 jobs both directly and in the related supply chain. One average 20GWh gigafactory would create 10,000 jobs.

The party has already pledged to make electric vehicle ownership more affordable, by offering interest-free loans for new and used EVs to those on low to middle incomes. “Labour’s plans will bring down bills, create jobs and help achieve net zero,” said Jonathan Reynolds, the shadow business secretary. “A Labour government will re-energise Britain’s economy by seizing the opportunities of the future.”

The UK is likely to have battery production capacity of about 68GWh a year by 2028, which the Climate Change Committee said needed to double by 2040. So far, a battery gigaplant in Northumberland has been awarded about £100m of government funds. The Britishvolt project aims to produce power cells for 300,000 electric vehicle battery packs a year at a factory on the site of the former Blyth power station.

Elsewhere, an announcement was made last year for a £1bn joint venture between Nissan, Envision and Sunderland city council to build batteries for the carmaker.
Add Comment