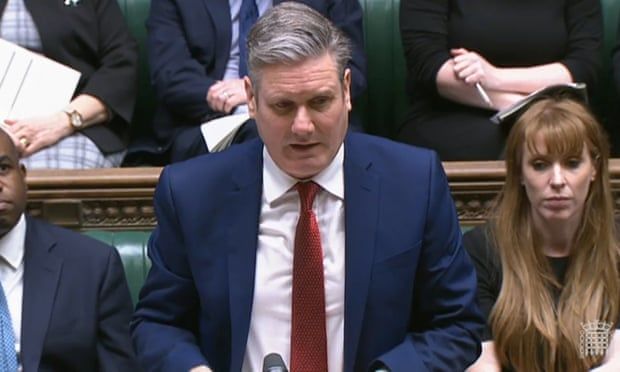 Keir Starmer, the Labour leader, told MPs that the Russian president’s “campaign of misinformation should be tackled”, starting with moves to prevent RT from “broadcasting its propaganda around the world”.

The English-language channel is regulated by Ofcom, which said on Monday it would prioritise any complaints about any broadcast coverage of Ukraine “given the seriousness of the crisis”.

“All licensees must observe Ofcom’s rules, including due accuracy and due impartiality,” an Ofcom spokesperson said. “If broadcasters break those rules, we will not hesitate to step in.”

RT’s coverage of the situation in Ukraine has been overwhelmingly from a pro-Russian perspective, since Putin ordered his military to enter the Russian-controlled areas of Luhansk and Donetsk after a decision to recognise the self-proclaimed republics as independent territories.

News segments also discussed the US, UK and EU responses to the crisis and showed footage of Johnson warning of the possibility of war and bringing in sanctions. But on-the-ground reports were largely from the perspective of celebrations in the territories, with a strapline and headline news of “fireworks, Russian flags, Donbass cheers Russian recognition”, interviews with jubilant residents, and Russian citizens who have “selflessly opened their doors” to refugees.

The broadcaster also showcased a series of pro-Moscow and anti-Nato commentators on Tuesday, alongside a segment on the west’s “lies” about having previously promised not to expand Nato in the 1990s.

Ofcom looked at complaints against RT as recently as earlier this month and decided not to investigate. It also decided not to take any action over RT’s broadcast licence in the wake of the Salisbury poisoning.

At the time, it said state broadcasters “vary greatly in the extent to which they accept and conduct themselves according to UK and generally accepted international values” and which will “sometimes commit, or will have committed, acts which are contrary to these values”.

It added: “In our judgment, it would be inappropriate for Ofcom always to place decisive weight on such matters in determining whether state-funded broadcasters were fit and proper to hold broadcast licences, independently of their broadcasting record.

“If we did, many state-funded broadcasters [mostly those from states which may not share UK values] would be potentially not fit and proper. This would be a poorer outcome for UK audiences in light of our duties on plurality, diversity and freedom of expression.”

In a section on RT, a commentator, Afshin Rattansi, responded to Starmer’s call for RT to be banned by saying Britain “has a long history of free speech” and suggesting anyone who thought it was propaganda could switch off. “We are still broadcasting here at the moment in Britain … We should be hoping that NGOs for free speech – from [Reporters Without Borders] and Amnesty International – will be there to defend this channel against Sir Keir Starmer and the British Labour party who want to ban free speech.”

The presenter added that the channel’s mantra was to “question more” the mainstream narratives and asked whether western viewers would be getting only a one-sided perspective if RT was not broadcasting in their countries.
#Johnson
Add Comment